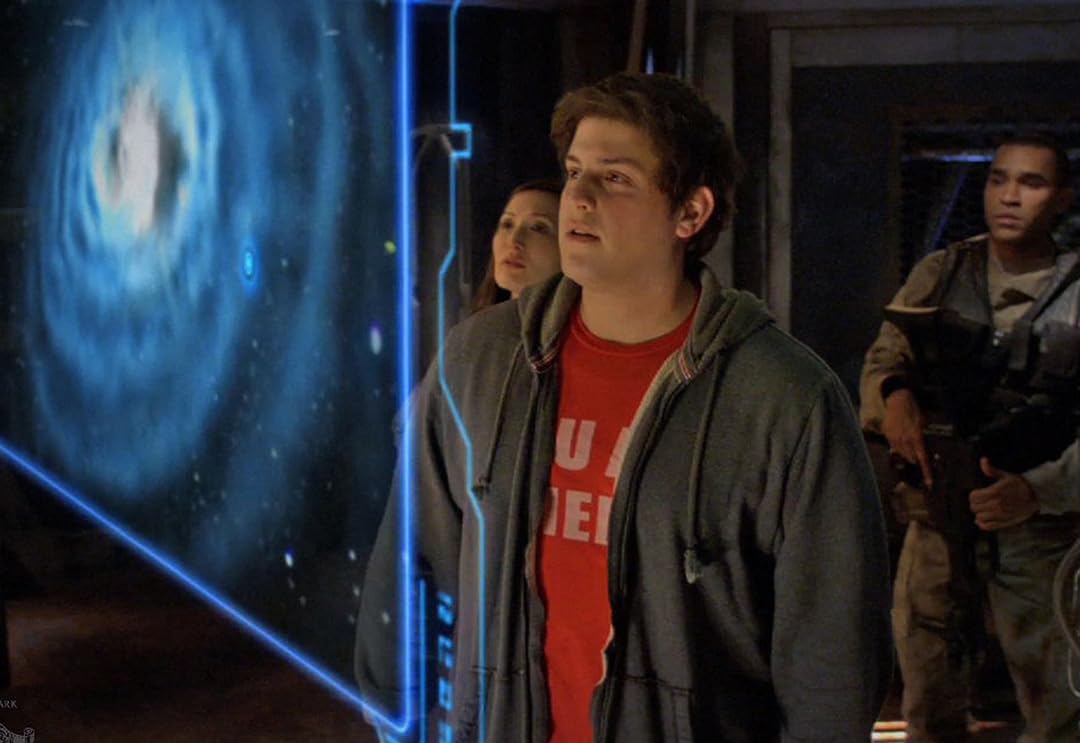 (3,886)
7.62010X-RayTV-14
An attack forces a group of scientists and soldiers through the Stargate to an unknown destination. They emerge on an abandoned and unmanned Ancient ship, the Destiny. They must try to unlock the mechanisms and purpose of Destiny and explore the new worlds they encounter, both for survival and to gain the knowlege needed to return to earth.

elorcReviewed in the United States on January 19, 2017
4.0 out of 5 stars
Cancelled too soon
Verified purchase
SGU was a show that I felt started slow but really developed a good direction later on in the first season, going into the second. It's still upsetting that Sci-Fi (excuse me, "SyFy"... ugh) bailed on this series, but that channel lost its focus long ago so it's not particularly surprising. As I mentioned, I felt the show started off kind of slow and clumsy, but it hit a groove and was delivering a fun story. The key thing about SGU versus the previous Stargate installments is that SGU's tone was remarkably different. While previous Stargates were largely adventurous and more light-hearted with a fair bit of humor worked in to its storylines, SGU is a noticeably bleak and dark show, far more dramatic than its predecessors. I think it's probably one of the reasons why the show didn't catch on with audiences right away: People expecting the tone of the previous shows were probably confused or even annoyed by SGU (which, to be fair, is how I felt initially as well). While it is fairly unlikely at this point that we'll get to see an SGU return, whether in TV or big screen form, this is an entertaining and underappreciated show that didn't get a fair shake from its network. It would certainly be great to see the outcome of events after season 2's cliffhanger.
27 people found this helpful

If you haven’t seen Stargate SG-1 (1997-2007) or Stargate: Atlantis (2004-2009), skip Stargate Universe and watch SG-1 and/or Atlantis. SG-1 was great and Atlantis very good. Universe is not great, or even good. The characters are mostly idiots who allow the mad scientist to lie and manipulate them, repeatedly. Instead of working together to get home they all work against each other. It’s boring to watch all of the foolishness and backstabbing in Stargate Universe. And at the end of the series, when it was cancelled for good reason, they’re still far from Earth.

There are a lot of great sci-fi shows out there that are more fun to watch than Stargate Universe, I won’t waste time listing them all. Here are a few outstanding sci-fi shows to watch instead of the not so good Stargate Universe show. There are many more than I’ve listed. Firefly (2002), Cowboy Bebop (1998-2000), Planetes (2003-2004), Red Dwarf (1988-1999), Silversun (2004), and the classic Star Trek (1966-1969), which inspired half a dozen spinoff shows, as well as countless imitators. Most of these wonderful shows aren’t about people lost in space, but they are memorable.

yellowspringsReviewed in the United States on August 13, 2016
5.0 out of 5 stars
My long lost love - Stargate Universe
Verified purchase
My review will be of both season 1 and season 2 disc sets. You can't review one without the other as together they form one of the best Sci-fi TV shows in recent times. I will be using the same review for both.

I remember when Stargate Universe first came out in 2009. Hubby and I loved SG-1 and we watched Atlantis but were not impressed. Right from the first episode of Universe we were enthralled.

Each episode was action packed with never a dull episode. The first season was character building and the second season followed with new and exciting story lines. I could see the possibility for several seasons coming but unfortunately the series was cancelled. Talk about a heart breaker.

Hubby and I never saw an episode again until the Comet channel started carrying Universe this summer. Watching these reruns made us want to purchase the two season DVD sets. They are currently available at less than $9 a season and I haven't found a deal better than that.

The first season is a six disc set while the second season is a five disc set. Hours upon hours of entertainment. Fall in love all over again with Stargate Universe. I can not recommend these two season sets enough!

The first season DVD set has over 2 hours of Special Features plus commentaries on each episode. Included are the Kino video diaries, chatting with the cast featurettes and extended version of the season premiere episode "Air" and more!

The second and final season has interviews with the cast of SG-U, behind the scenes featurettes including Deconstructing Destiny, audio commentary by cast and producers on all episodes, Pitches: A Journey of Friendship and Discovery and Behind the Season 2 finale - Gauntlet and more!

These two season DVD sets are a must have for your collection!
21 people found this helpful

RDDReviewed in the United States on March 26, 2021
5.0 out of 5 stars
A Great New Spin on Stargate!
Verified purchase
“Stargate Universe – Season 1” collects the first twenty episodes of the latest entry in the “Stargate” franchise that originally aired on Syfy between 2 October 2009 and 11 June 2010. The story picks up after the events of Dean Devlin & Roland Emmerich’s 1994 “Stargate” film as well as the television series “Stargate SG-1” and “Stargate Atlantis” (like the preceding television series, this one does not reference the “Stargate Infinity” animated series that is considered non-canonical). Each series has gone further than the last, with “SG-1” going beyond the planet in the original film, “Atlantis” going to a new galaxy, and now “Stargate Universe” uncovers more secrets about the gate, including a 9-chevron address that dials in to the autonomous Ancient ship Destiny which is traveling in far-flung galaxies establishing new stargate networks. Unlike previous series, this one has a greater sense of jeopardy as the ship’s age and the extreme distance from Earth put the human crew in danger. Further, members of the Lucian Alliance (human mercenaries from the Milky Way Galaxy that filled the power vacuum left behind by the Goa’uld) want to access the ship and use it as a weapon. The story alternates between events on the Destiny and back on Earth.

BBQ Corn ChipsReviewed in the United States on March 12, 2016
5.0 out of 5 stars
SGU was a wonderful new Stargate show. Wish it lasted a couple more seasons.
Verified purchase
When Stargate Universe came out on television, I was immediately intrigued. I did not know what to expect with it being another Stargate spin-off. It was promoted to be a different Stargate show. And, it definitely was not like it's predecessors.

The show is very interesting, and I definitely liked it very much. I liked that it was different, and that it did not revolved around the same Stargate world as the previous shows were tied. Stargate Universe was unique. It did fall in line with the previous shows with that Stargate World, but it was in a way that was restricted and distant. It allowed the show to be tied to overall Stargate as one universe.

The fact that it was a whole different Stargate type show was also why it had trouble staying on air. Fans associated Stargate to be a certain way, and it is often hard to sway fans from what they expect and want. The show was very good. And as episodes progressed and the show moved forward, it got better and better and better. Unfortunately, decisions are made early for planning and future shows results are never seen yet to be able to influence the decision-making.

musicmonsterReviewed in the United States on September 22, 2019
3.0 out of 5 stars
SciFys attempt to make soap opera in space and trash another franchise
Verified purchase
Ambercronbie kids + SciFy = THIS. It was a horrible show when it aired, picked up the set on the cheap and was curious if the commentary would shed some light as to WHY they went this ridiculous direction in the stargate franchise.. well... there are very few commentaries with andy makita and will waring how are excellent at providing behind the scenes gold.. But the rest were 'narrated' by the youngest members of the cast; by narrate i mean 4 teenagers watching the show with you and then bursting out in conversation when they appear on screen.. nothing meaningful ... In a way it explained what happened to this poor franchise, they let the kids run the show because it was made in the midst of the big millennial marketing con, when we thought this generation would have less disorders and more focus to succeed than our generation.
One person found this helpful

Hobby SeamstressReviewed in the United States on October 31, 2015
4.0 out of 5 stars
Imaginative and Inventive
Verified purchase
As one who has taught astronomy at the university level, I have found SGU thought provoking. The program represents the culmination of all lost-in-the-stars TV creations; Lost in Space, Star Trek Voyager, etc.
The drive of the series is the episode-by-episode tensions between Dr Rush (played by Robert Carlyle) and Colonel Young (Louis Ferreira), a sort of intellect versus brawn, egg head versus military regimen that we've seen before. But one finds these two protagonists so flawed by their own demons, and both so necessary to the survival of the hundred, or so, strandees, that the viewer ends up admiring and rooting for both characters.
The glue that holds the show together, and the character with which we most identify, is the early twenties something math genius, Eli, who unlocks most of Destiny's secrets and provides much of the humor. Though he is initially shanghaied into the Stargate world, he quickly stays gladly, excited by the opportunity. On Destiny, he becomes the voice of reason and morality.
The vessel upon which they're stranded, is the marvelous uncredited character, which makes the series so fascinating. The pinnical creation of a long lost ancient race, like the Krell of Forbidden Planet (1952), the ship, named Destiny, seems to have a mind of its own. It stops at various planets, and moves through galaxies on the other side of the universe, which can be problematic because the crew is forced to visit these planets for supplies like food and water.
The technologies are often alien and amazing. They struggle with enemies, human and alien, hostile environments, both on planets and their own ship, and exploration is a constant, both in space and on the huge vessel, which always unfolds a new surprise.
Star Gate Universe holds so much promise for the sci-do officianado, and breaks new ground. Two years was not enough for the series, but we'll take what we can get.
9 people found this helpful

MarthaReviewed in the United States on October 12, 2016
5.0 out of 5 stars
I think there is something for everyone. and the more you get into the serries the better it gets.
Verified purchase
I usually don't care that much for the space movies. But this series has had me from the first show. It just gets better and better.With the interesting shows that they come up with it is fun to watch. You get tied up with the lives of the people. It isn't blood and guts type of show. They make you think real hard about the story. There are family and friends. Not a bunch of macho men shooting up everything that moves. There is family, friends and they keep you hanging on to see what happens next. I am still watching and will be till I get to the end.
Martha
5 people found this helpful
See all reviews
Back to top
Get to Know Us
Make Money with Us
Amazon Payment Products
Let Us Help You
EnglishChoose a language for shopping. United StatesChoose a country/region for shopping.
© 1996-2021, Amazon.com, Inc. or its affiliates