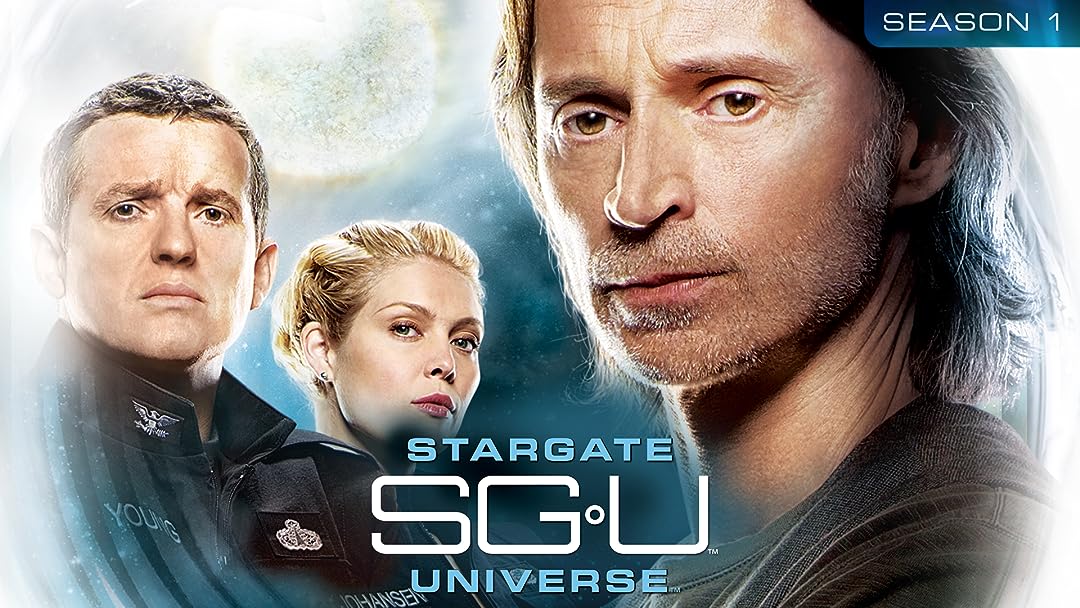 (391)2010X-RayTV-14
SGU follows a band of soldiers, scientists & civilians, who must fend for themselves as they are forced through a Stargate when their hidden base comes under attack. The desperate survivors emerge aboard an ancient ship, which is locked on an unknown course & unable to return to Earth. Faced with meeting the most basic needs, the group must unlock the secrets of the ship's Stargate to survive.

HeizenhamburgerReviewed in the United States on April 10, 2019
5.0 out of 5 stars
bring this back somebody
Such a shame SyFy cancelled this. Watching it again several years later and I think I like it even more than before. I wish Amazon or Netflix or somebody would resurrect this show! It's not too late. The episodes 'darkness' and 'light' have some of the most visually mesmerizing scenes I have ever seen. There are no good scifi shows now where we explore the universe. They are all alternate realities, superheroes or zombies. It would be really nice to have this back. It is such a great show and it also has such incredible potential for growth. It is not an adrenalin rush as so many newer shows try to be but, is instead a very well done, thought provoking and visually stunning work. It is better (and in most cases is far better) than anything SyFy has brought us since and is as good or better than other scifi offerings on amazon or Netflix. It would also appear from some of the negative reviews, if your looking for more of the same from sg1 and aren't really open to something different you may not like it. I personally enjoyed the older series but always thought them to be less than what they could have been and more than a little cheesy sometimes and was always very one dimensional. I was never that big of a fan of sga because it often went too far into the cheesy side of the spectrum. Sgu is darker and much more complex with real characters and in my opinion, very good, but it is not a revamp of the same old formula.
346 people found this helpful

Kindle CustomerReviewed in the United States on April 12, 2019
5.0 out of 5 stars
Not your daddy's Stargate
When SGU was launched, fans of its predecessors, Stargate SG-1 and Stargate Atlantis expected more of the same. Namely, a team of intrepid heroes has exciting planet-of-the-week adventures while fending off evil and suspiciously human-like enemies, such as the Gouald or the Wraith, with FN P90s and lots of explosions. SGU broke the mold with its more serious look at space exploration. We could no longer magically understand aliens (what few there were). Technological societies were not present on every planet but instead were quite rare. To me, this made the encounters with the alien all the more exciting.

Robert Carlyle's Dr. Rush was no Dr. Carter, or even Dr. McKay. And Louis Ferreira's Colonel Young was no Jack O'neill or even John Shephard. The SG-1 protagonists were extremely likable and heroic, and while McKay and Shephard had some issues with other people and authority, respectively, they were still likable and heroic. Variations on a theme. The SGU protagonists are more like real people. Deeply flawed people. Rush is selfish, cunning, abrasive, brilliant but not impossibly so, and at times just fundamentally unlikable. Colonel Young is insubordinate, moody, often unprofessional, but military through and through. Both characters are far more interesting than their predecessors. The other cast members are good but these two and their diametrically opposed world views really steal the show.

Unfortunately, too many fans of SG1 and SGA hated they didn't get another carbon copy spinoff and campaigned so much against SGU that creators tried to appease them bringing back fan favorite Rodney McKay, but such efforts were ultimately too late to prevent series cancellation.

Personally I like all the Stargate series, but this one is by far my favorite. SG1 and SGA are fun, but ultimately meaningless, asking few serious questions about morality or the nature of our existence. These are topics explored in abundance in SGU. Indeed, the (unfulfilled) mission of the Ancient ship Destiny was to answer such questions. Meanwhile, each episode delivers various challenges to the crew's survival, ranging from seemingly mundane problems like lack of water, to microsocietal problems in the Rush/Young camps, to exotic and exciting problems like being hunted by aliens and Berserker drones.

The way the series ended left it possible this show could be picked up again. The actors are about a decade older, but logically the characters could have aged as well after the events in the Season 2 cliffhanger. It's my hope somebody will give SGU a proper run or at least conclusion.

This series is a little slow to build up, certainly compared to its predecessors where galactic-wide war breaks out more or less in the first episodes, but give it a chance and you won't regret it. Just don't go in with the expectation SGU is like SG1/SGA, or you will be disappointed.

AbumaxReviewed in the United States on April 13, 2019
1.0 out of 5 stars
This is what happens when you have NO budget
1. Not one likeable character. Frankly anyone one of them could die and I would not care. None of them have any charm or Star Factor. The ONLY people you are about are Carter, O'Neill and Shank in their obligatory yet no doubt profitable cameos. Meaning that's where the salaries went.
2. Supposedly run by the military yet all the bad decisions NO military person would ever make are routine. No real leadership from Young and Rush is completely repugnant. Also the Asian aggressive powermad corporate bitch is such a bad stereotype and I would have put a bullet in her myself if I was aboard "Destiny" :|
3. Low Lighting to hide lack luster sets and to create drama where there is none. The only scenes that are pretty cool are used over and over in the intro to each episode along with Rush's lame dialogue.
4. Most of the Sets are reused or borrowed. They have repetitive scenes off world, i.e. Earth to same money. You have to wait almost half way through the first season til you can see them spend a few dollars. To be fair Stargate , Alantis and Farscape also employed these methods but they spent on key scenes with new tech or sets.
5. All of the humans from Earth, Military and Civilian also fight each other so much and are constantly trying to "take over" you end up wishing them all dead.
6. The interpersonal scenes and flashbacks. Another way to save a buck and create some kind of backstory where there is none.
All in all, Terrible. I loved SG1 Atlantis Farscape The Movies,,, You would think with the incredible fanbase that Studio would invest in some kind of longevity,,,,NOPE
118 people found this helpful

DesiReviewed in the United States on April 4, 2019
5.0 out of 5 stars
What Sci-Fi TV should be.
Amazing television. Human drama that can only be realized through science fiction. Superbly written, acted, directed and produced. Season 1 does do a lot of character and story-line building, but sets up so many payoffs in season 2. Quite different from the first 2 Stargate series with more tension and less humor. (Still there are chuckles) Do not watch an episode or 2 and think you get it. The character development from beginning to end is quite engaging. Truly great TV.
105 people found this helpful

Brandon TooleReviewed in the United States on April 4, 2019
5.0 out of 5 stars
My personal favorite
Stargate Universe is my personal favorite and different from the rest of the Stargate franchise. The beginning can be a bit boring, but stick with it! They need to establish life on the ship as part of the story line. Many of my friends disagree with me, but I think it was an awesome series.
112 people found this helpful

JayavarmanReviewed in the United States on April 12, 2019
1.0 out of 5 stars
Generic Battlestar Galactica Ripoff
This was just a complete departure from the two previous Stargate series with a completely unlikable cast of characters. The characters were lacking the team chemistry and camaraderie that made the prior series so likable. It was poorly written with gaping plot holes, junior high levels of teen angst and melodrama, to go along with horrendous camera work. Just a dark, depressing, soap opera for emotionally stunted emos.
34 people found this helpful

Dodie's DoodlesReviewed in the United States on July 11, 2019
1.0 out of 5 stars
Repetitive and boring, cheap nude shots to boost ratings
Just note for other viewers, this program contains nudity in almost every episode and in season 1 ep 9 is entirely about a lesbian relationship, no thanks, I want to watch science fiction not chick action. This show should be rated R if there was such a rating for TV, or in my opinion, rated MA. Here's the thing, when I watch something that is on Amazon and linking with shows I like such as Andromeda, I find these kinds of shows not only offensive but also incredibly boring. Where is the UNIVERSE in Stargate U? This whole show is about boring fighting among people on the ship and the military on earth. It is the same show over and over with minor changes. Every show, someone is naked at some point, there is some flash of some sex scene, there is some fighting over rations or water, there is an argument about whatever is going on with the military at home, and the commander and Wise are always fighting. That is it. Every episode. This won't be expanding anyone's mind, or making anyone want to go to space, that is for sure. One star is for actors who really are working hard, they just have a bad script and awful sets.
22 people found this helpful

Robert AlmyReviewed in the United States on April 12, 2019
1.0 out of 5 stars
Stargate Universe is Terrible
SGU is extremely terrible. It abandons the successful formula of SG-1 and Atlantis and adopts the style of the remade Battlestar Galactica (which also was a ratings disaster). There is no camaraderie. The characters all hate each other. Some try to kill one another. There is no team. They don’t even make usual trips through the stargate. And if they do go through the stargate, they end up at uninteresting worlds where it is nothing but a giant desert. Instead of getting quality science fiction entertainment, you get a garbage soap opera about boring politics on a spaceship. ZERO STARS
27 people found this helpful
See all reviews
Back to top
Get to Know Us
Make Money with Us
Amazon Payment Products
Let Us Help You
EnglishChoose a language for shopping. United StatesChoose a country/region for shopping.
© 1996-2021, Amazon.com, Inc. or its affiliates