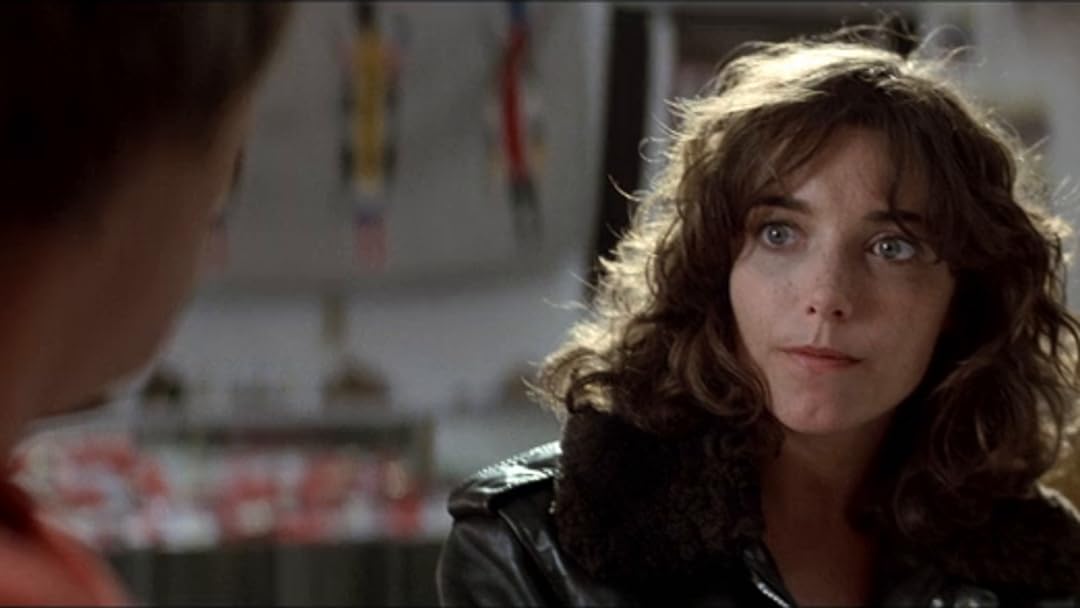 (3,356)
1 h 55 min1984X-RayPG
Upon crash-landing on Earth, an alien space traveler takes on the appearance of a young widow's husband, and enlists her help to get across the country and avoid the authorities. As the government tracks them down, the unlikely pair begin to bond.

Max PowersReviewed in the United States on September 23, 2019
5.0 out of 5 stars
Great Story
Verified purchase
This is to me, one of the greatest SciFi movies of all time. Without going into a lot of deal, it has all the elements of a great plot with a view of humanity and the fear of the unknown as amplified by the military's response to an extraterrestrial. Even though The Day the Earth Stood Still was more international in scope perhaps due to the superior nature of the aliens and their craft. Love practically all of Carpenter's movies. Thanks for reading. I know I'm not the best movie critic. Today, Hollywood is devoid of imagination. Most movies now are animated, dumbed down crap for the illiterate masses.
29 people found this helpful

NoVA guyReviewed in the United States on April 11, 2019
5.0 out of 5 stars
DVD: Starmandisco
Verified purchase
I saw the movie on the silver screen when it first released. Like ET, the story's hero was marooned her on Earth and had to figure out how to survive. Like ET, he finally got picked up by his shipmates. In between the stories are quite different.

But there is one more similarity: once the authorities discover the existence of the alien on Earth, they make strenuous efforts to catch and (presumably imprison) said alien. No attempt to communicate until the alien is permanently nabbed. The message in both cases is that we humans are savages with a patina of civilization that disappears when the situation seems (to us) to demand capture and sequestration of somebody different enough from us - on apparent grounds that "different enough" can be conflated with "existentially threatening" to us. We (at least in these two movies) have no protocol for diplomacy with non-humans. In the much-later movie "Arrival" we almost didn't again - to our near disaster. Perhaps if enough such movies are made, and watched, somebody will get started developing a protocol of that stripe - before it must be applied to escape our doom at the hands (so to speak...) of a superior (space-faring) race.

WeAreUsReviewed in the United States on September 21, 2020
5.0 out of 5 stars
Great Movie ! Even after all these years.
Verified purchase
I have not watched this in years…still good. Jeff Bridges is absolutely terrific in playing an alien in a brand new, strange body. He’s so mechanical in speech and action. Great stuff. I liked the nerdy science guy (Charles Martin Smith). He comes through in the end. Karen Allen is great, especially in the scene where she watches him bring the deer back to life then shoots the gun to get the bad guys off her man. Decent ending….how else could it end? A sequel would’ve been nice to see, with her new son coming of age. Great movie.
12 people found this helpful

T. SantoReviewed in the United States on January 19, 2021
1.0 out of 5 stars
Strictly by the book kid's movie that insults the intelligence of kids.
Verified purchase
It is simply an ET knock-off with outrageous plot contrivances, too any to list but I will list a few: An alien comes to earth after capturing the Voyager with the golden recordings of greetings. Why he comes who knows? But he wants to leave immediately. (can you fault him for that?) Of course his craft is easily shot down by a couple of missiles yet he survives. So much for advance technology. Ok so now authorities are in pursuit and here is where it gets absurd: Script writers always have to have an antagonist who ignores the common sense of underlings and want to kill the the alien. Now how do they get on the trail? by a truck driver in the heat of a nearly head on collision, in which not once would he have been able to see the rear license plate of the car, but is able to give the exact plate number, a complete description of the make and model of the car the alien was in, a complete description of the alien (who had morphed (cloned?) into the likeness of the dead husband of the hostage?) but the scientists were able to determine from a photograph that that is exactly what the alien had done. All within about a few hours after he had landed. If one thinks that this is good plot development, then one has to suspend all sense of believability. Ed Woods would have been proud of this script. I stopped watching at this point.
3 people found this helpful

joel wingReviewed in the United States on May 27, 2022
3.0 out of 5 stars
A lot of it's predictable but Jeff Bridges & Karen Allen are great
Verified purchase
I thought I knew all of John Carpenter’s films but apparently I didn’t when I found out about Starman. It’s not like any other movie he made. That’s because it’s an alien romance as Jeff Bridges is an alien who takes on the form of Karen Allen’s dead husband. The two have to adapt to each other but then predictably she falls for him. There’s a good bit of comedy thrown in with common tropes about aliens not understanding Earth customs and language. There’s also the theme of the government seeing aliens as a threat. While those are very predictable it was still an enjoyable movie. Bridges and Allen both give strong performances and that’s really the reason to watch the movie.
2 people found this helpful

Valerie LovejoyReviewed in the United States on January 25, 2021
5.0 out of 5 stars
Great Show!
Verified purchase
I love this movie, it's an older show but very powerful, could this actually happen, I'm pretty sure it could and has happened, only you see why anyone that knows anything about Starbeings would never say a word about it! I like the way the show was written, it shows us just how simple minded is a great deal of humans, instead of actually trying to get to know anything more about someone or something that is different in peaceful and humanly way, they want to dissect it and kill it, as if they have the right to destroy any life form in this Universe or any other Universe, but look at the way people in power deal with each other, they can't even deal with all there family in the human race much less a brother from another planet!
4 people found this helpful

Amazon CustomerReviewed in the United States on February 16, 2021
2.0 out of 5 stars
plot makes no sense
Verified purchase
a friendly alien comes to earth to scout it out (or something), but gets stranded due to a mishap. then govt agents come hunting for him, so he needs help to escape and return to his home planet. sound familiar? ET? well, this film shares its basic plot with ET. while ET was basically a kid's movie, the scattered running around for no reason did not bother anyone. but this one pretends it is for adults. but the plot has holes you could fly a space cruiser through. you keep asking yourself: why is he/she doing that? why would they want to dissect someone who has morphed into an earthling? then there are the magic glowing marbles that can do . . . who knows. the two leads are appealing enough but the plot is pretty annoying.

M. BurksReviewed in the United States on April 13, 2013
4.0 out of 5 stars
Great movie, so-so blu ray.
Verified purchase
Starman is probably John Carpenter's most commercially successful film, and it deserves the accolades. Jeff Bridges and Karen Allen give fantastic performances, and really that is the major draw of this film. This is a great film to introduce someone to science fiction, as it's a good story with endearing performances and is very light on "sci-fi" effects and such. The film could be downright silly in the wrong hands, as it's essentially E.T. for adults, the Jeff Bridges perfect performance and John Carpenter's sure direction make for a winner.

The blu-ray on the other hand is a disappointment. The only highlight is that you get the film enhanced for 16x9, as the previously available DVD was a chopped up pan & scan (I REFUSE to use the term "full screen", that term is criminally inaccurate as we are no longer in 1997). The picture is fairly soft and flat, but nothing horrible. I've seen worse, but I've seen better. On the bright side the transfer is fairly clean, and really, you aren't buying Starman as a reference quality disc anyway. Audio is fine, dialog is clear and the score is beautiful. There are no extras of any kind which is both hugely disappointing and mind boggling. Carpenter has commentaries available on most of his releases, and they are always entertaining, so I don't understand why there is not one recorded for his most commercially successful film. Disappointing.

To sum up, if you love the movie then this is an easy purchase, just remember that you are getting the movie and nothing else. Still recommended.


22 people found this helpful
See all reviews
Back to top
Get to Know Us
Make Money with Us
Amazon Payment Products
Let Us Help You
EnglishChoose a language for shopping. United StatesChoose a country/region for shopping.
© 1996-2022, Amazon.com, Inc. or its affiliates