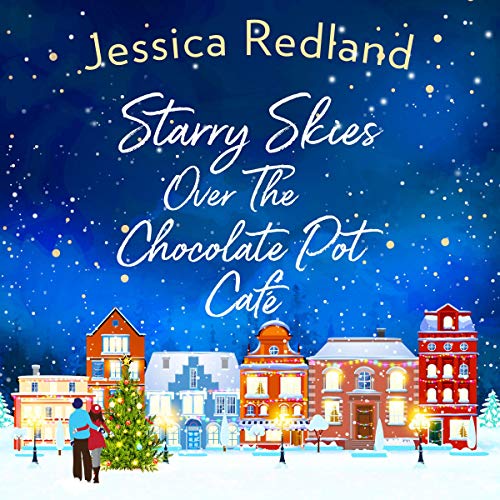 Cosy up with a mug of hot chocolate for some festive sparkle from best seller Jessica Redland.

Everyone is getting into the festive spirit on Castle Street - snow is falling, fairy lights are glistening and Christmas shopping is underway.

But for Tara Porter, owner of thriving cafe The Chocolate Pot, this is the most difficult time of the year. From the outside, Tara is a successful businesswoman and pillar of the community. Behind closed doors, she is lonely.

With a lifetime of secrets weighing on her shoulders, she has retreated from all friends, family and romance, and shut her real self away from the world. After all, if you don't let them in, they can't hurt you. She's learnt that the hard way.

But as the weight of her past becomes heavier and an unexpected new neighbour moves onto the street - threatening the future of her cafe - Tara begins to realise that maybe it's time to finally let people back in and confront her history. It could just change her life forever.

Doris McCrary.
5.0 out of 5 stars Great
Reviewed in the United States 🇺🇸 on June 14, 2022
Verified Purchase
I enjoyed this book very much. The only thing wrong was that it ended too soon. I wanted to know what happened to the boy and his relation with Jed.
Read more
Helpful
Report abuse

Amazon Customer
5.0 out of 5 stars Excellent read!!
Reviewed in the United States 🇺🇸 on May 25, 2022
Verified Purchase
Jessica's book is interesting from the very beginning, and I didn't want to put it down when I started reading it!
Read more
Helpful
Report abuse

Kindle Customer
4.0 out of 5 stars Tara and Jed
Reviewed in the United States 🇺🇸 on June 23, 2021
Verified Purchase
I really enjoyed this book about a young woman who was a foster child, betrayed by her big sister at a foster home. She meets Jed and dislikes him. Then things change in her life.
Read more
One person found this helpful
Helpful
Report abuse

R. M. Harris
5.0 out of 5 stars All we need is love.
Reviewed in the United States 🇺🇸 on December 5, 2021
Verified Purchase
I loved this book because it reminds us that love and positivity can conquer all. A true lesson of love and forgiveness.
Read more
Helpful
Report abuse

Bonnie
5.0 out of 5 stars The chocolate Pot Cafe
Reviewed in the United States 🇺🇸 on August 2, 2021
Verified Purchase
Jessica Redlands writes a beautiful story that will bring laughter, tears, and a little bit of anger for the life her characters endured within her romance. I enjoyed reading about where her inspiration for the characters came from as well. Lovely!
Read more
Helpful
Report abuse

Kathleen Booker
4.0 out of 5 stars Sweet book
Reviewed in the United States 🇺🇸 on December 11, 2020
Verified Purchase
Tara suffers a lot of loss growing up and finally finds her happy ever after with the least likely of men
Read more
One person found this helpful
Helpful
Report abuse

Joycet
5.0 out of 5 stars Nice
Reviewed in the United States 🇺🇸 on July 8, 2021
Verified Purchase
Great story that deals with real life. It is Truly a treat to read one of Jessica’s books. Enjoy it.
Read more
Helpful
Report abuse

Kathleen
5.0 out of 5 stars Fantastic, warm and wonderful story
Reviewed in the United States 🇺🇸 on May 12, 2021
Verified Purchase
Loved this book and didn't want it to end, but so happy for Tara to have a happy path forwards. Thank you for writing this story.
Read more
Helpful
Report abuse
See all reviews

Carys Connelly
5.0 out of 5 stars Tear-jerking, funny and fabulously feel good!
Reviewed in the United Kingdom 🇬🇧 on February 4, 2019
Verified Purchase
I so wish I could visit Castle Street in real life! I read the two books that Jessica Redland set there last Christmas, and really enjoyed them both, but Christmas at the Chocolate Pot Café takes things to a whole new level. Although it’s set at Christmas, I didn’t get a chance to read it until January and so I can confirm it is equally enjoyable at any time of year.

Tara appeared as an ‘extra’ in some of the earlier Castle Street books, as she runs the Chocolate Pot Café that is a hub of the Castle Street community. However, Tara doesn’t put herself at the centre of that hub. Whilst she is friendly towards everyone, she doesn’t let anyone into her heart or her home, except her giant house rabbit, Hercules. Tara has suffered more loss in her life than most people would experience in several lifetimes. She’s been let down by the people she should have been able to trust above all others, too, so why should she let her guard down for anyone?

Carly is another of the shop owners from Castle Street and she runs a cupcake business which is featured in one of Jessica Redland’s previous Christmas novels. Slowly Tara begins to get closer to Carly and, bit-by-bit, she finds herself finally telling someone about the things she has been through and why she is so determined to keep up the metaphorical walls that stop her getting hurt again. Whilst Christmas at the Chocolate Pot Café deals with some heart-wrenching issues, it is typically full of the warmth and humour that makes Jessica Redland’s writing so distinctive.

There are two key people from Tara’s past that arrive back in her life during the course of the story and I don’t want to say too much about either of them in case I give away the plot. One of them she is less than pleased to see, to say the least, and the other she is terrified of letting back into her life, even though she desperately wants to. There were parts of the story that brought tears to my eyes and other bits, including the wonderful feel-good ending, that left me with a big smile on my face. I hope there will be more of Tara’s story to come, and more from Castle Street in general. This is my stand out favourite of all Jessica Redland’s Christmas books. And given that they are all so highly rated, that says a lot. Don’t wait until next Christmas to download this book, though, read it now. You’ll love it!
Read more
6 people found this helpful
Report abuse

Lampshades
5.0 out of 5 stars Heartwarming read
Reviewed in the United Kingdom 🇬🇧 on April 15, 2021
Verified Purchase
Heartwarming story about a young girl who is brought up by foster parents after losing her mum to suicide and her dad to a car accident. She thinks her step sister is looking out for her but how wrong could she be! She ends up leaving home without saying goodbye to her foster parents and tries to start a new life somewhere else running a cafe. But her troubles don’t end there, because of her past, she can’t cope with everyday life and shuts herself away from people who want to befriend her until things start happening when the ex owner of the cafe turns up and buys a shop opposite her.
Read more
2 people found this helpful
Report abuse

anna maria
5.0 out of 5 stars Absorbing read with wonderfully crafted Characterisation.
Reviewed in the United Kingdom 🇬🇧 on October 5, 2020
Verified Purchase
New adventure for me reading one of Jessica Redland’s novels. It stood out from the crowd in a writing group when looking for a Christmassy read. Tara warmed my heart immediately with her adorable Chocolate Pot café as did the beautifully described setting in North Yorkshire, a place I love. And I wasn’t disappointed. It soon became clear I had not only chose a dream get away from my real world to a wonderful place, but I was going to share a journey with the delightful Tara which doesn’t come without emotional obstacles she has to overcome after escaping a broken marriage that seems to eat away at her. My compassion for her grew even more as the story unfolds further. The beautifully described scenes of the shops on Castle Street made me feel like I was there.
Although I hadn’t read any of the other novels in this series it was easy to pick up and learn about the wonderful believable characters without a problem.
I’m not here to tell the story, just to let you know how much I enjoyed it and I’m sure you will too.
Read more
One person found this helpful
Report abuse

Reena
5.0 out of 5 stars "Be brave...A few minutes of courage might change your life"...
Reviewed in the United Kingdom 🇬🇧 on February 2, 2023
Verified Purchase
Absolutely loved the beautifully written Castle Street series of books. We discover Tara's story in 'Starry Skies Over The Chocolate Pot Cafe' and her tale includes themes about blood family, foster family, friendship, betrayal, braveness and courage, learning to trust again, figuring out closeness/intimacy issues, opening up to friends and colleagues about the past, and (of course) love. Such a wonderful book with some amazing quotes. Through reading and listening to this book series, Jessica Redland has become one of my favourite authors and I now look forward to reading her other novels. Emma Swan is also an excellent narrator. I highly recommend that you read or listen to this author's books. They are absolutely amazing and such a pleasure to experience.
Read more
Report abuse

Nikki Mooney
5.0 out of 5 stars Wow Amazing book!
Reviewed in the United Kingdom 🇬🇧 on September 21, 2020
Verified Purchase
Jessica Redland books just seem to get better and better! Another one you won’t want to put down!

Returning to Castle Street in Whitsborough bay we meet another one of its residents. This time it’s Tara. Tara owns The Chocolate Pot Cafe, we also see returning Castle Street Character Carly, who has become a friend to Tara. Tara hasn’t had the easiest of rides and being a long standing resident on the street who has made friends, friends who know nothing about Tara. Can a Sprinkle of Christmas Magic help Tara move forward, help her release some of her past in order to allow her to move forward?

I was hooked from Page one! Gripping yet an easy read. However very emotional! I think I experienced every emotion reading this...... excellent work Jessica!
Read more
One person found this helpful
Report abuse
See all reviews