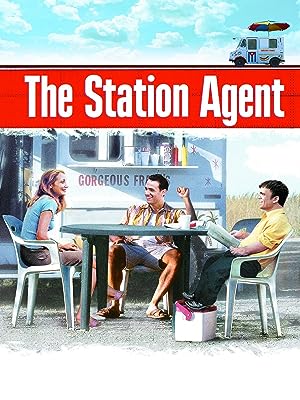 Henry BemisReviewed in the United States on May 4, 2016
5.0 out of 5 stars
One of my favorite films
Verified purchase
Every time I watch this film I love it a little more. Great ensemble acting. I fell in love with these people and wanted oh so bad to be a part of their small circle. The shy and damaged Fin. The sad and grieving Olivia. And the effervescent Joe, that one in a million human being whose able to see past the superficial exterior to the beautiful person living within. Oh, if only the world was full of Joes. I feel sorry for the people who couldn't see what a wonderful motion picture this is. It's as if they've failed some sort of litmus test for humanity.
50 people found this helpful
Report abuse

MoonlightbikerReviewed in the United States on June 30, 2019
2.0 out of 5 stars
Can't understand the good reviews
Verified purchase
If you are looking for a slow movie that will make all previously slow movies look fast, then The Station Agent is the prefect flick for you. At first I thought I had fallen asleep, but then I realized my dreams were way better than this waste of time movie. Do yourself a favor.... go to the store and get a loaf of bread and a jar of peanut butter. Then go home and open the bread and the jar of peanut butter. Now smear peanut butter on one slice of the bread. Put the cover back on the jar of peanut butter, and put the rest of the bread away so it doesn't dry out. Hold the slice of bread in one hand, peanut butter side up, and slap it against the wall. Now walk across the room and take a seat on the couch and wait for the bread to eventually start to slide down the wall. For the first 10 minutes you'll be convinced it will start to slide at any moment. After about an hour you won't be able to look away because it's impossible for it to just sit there stuck to the wall without any movement at all. Every once in a while a fly will enter the room and land on the peanut buttered bread stuck to the wall. You'll be sure the fly will add a new element to this situation, but it won't. It too will just sit there doing nothing. Then right at the one hour and 29 minute mark the piece of bread will suddenly fall off the wall and it will all be over. This is an exact replication of The Station Agent, except I didn't charge you $3.99.
9 people found this helpful
Report abuse

Dr. PaulReviewed in the United States on October 7, 2020
5.0 out of 5 stars
Very good movie, really enjoyed
Verified purchase
Had never heard of The Station Agent until someone mentioned it for its solid characters and dialog. My wife and I grabbed it due to its price in Amazon Prime, and watched for the first time. We came away moved. The characters and dialog are great. And the story is sweet and moving as well.

It is heavy and at times might feel like it’s dragging, but if you’re paying attention it’s developing character and story, which in this case are deep and meaningful. Peter Dinklege is outstanding in the role. I’ve not seen much with him, but he won me over in every way with this film and I hope to see him far more often. The case overall is great individually and together, and each and every one of them deserves to be recognized for their work here.

It’s not “uplifting” or a RomCom, but it is a really great film and one we’ll be looking forward to enjoying again and again.

V KenneyReviewed in the United States on November 6, 2020
4.0 out of 5 stars
Really outstanding
Verified purchase
I loved so much about this movie, the acting was phenomenal and I was immersed from the very beginning. Rather than finding this movie depressing or slow (as some reviewers have said) I found this movie hopeful, and savored the time it took to allow for the growth of these characters. The only real complaint I had was that this story unfolded in a small town setting, and usually people in small towns do not particularly embrace newcomers, dwarf or otherwise; and Joe's dogged persistence to befriend Fin seemed highly unlikely, especially in light of how many times he was rudely rebuffed. Regardless, it was easy to overlook that detail, and enjoy this movie.
4 people found this helpful
Report abuse

I Got PopcornReviewed in the United States on November 30, 2016
4.0 out of 5 stars
ALMOST perfect DVD - for a perfect movie
Verified purchase
The only reason I'm giving this four stars is, it's not the version with the commentary and extras. The commentary features all the lead actors, giggling joyfully and poking fun at themselves, and - believe me - you'll never watch the movie itself without chorusing "STELLA!" again.

Notes on the movie itself - and a SPOILER ALERT. This movie is extremely subtle and riveting. The more times you watch it, the more you'll be surprised.

SPOILER: finally figured out the angry bar scene. The people are NOT making fun of Finn as a dwarf - they're concerned he's socking away too much whisky, too fast. A drinker cheers him as a macho drinker. A couple watches in worry. Even the guys who he had trouble with originally - and are probably feeling ashamed of themselves - note his drinking, and one of them brings him a beer, and pats him on the back. You can almost hear him say, "Slow down on the whisky, man - have a beer."

It's that subtle. One of the great movies. Watchable over and over again.
14 people found this helpful
Report abuse

S. BernardReviewed in the United States on July 7, 2016
5.0 out of 5 stars
COMPLETELY satisfying tale!
Verified purchase
WOW! What a gem! This movie is quiet and unassuming, yet very powerful. ALL of the performances (Dinklage, Canavale, Clarkson) are spot on. This always feels like a slice of like where we are the voyeurs, not like a movie where you are acutely aware of the trappings.

It's a simple story about a man named Finn who happens to be a dwarf, and wants to live out his quiet life without getting too close to anyone.Every day people make fun of him or react in ways that are less than polite.
He meets Joe, a loquacious and bubbly guy who for his faults, at least sees Finn as a man (not just a dwarf). Their paths intersect with Olivia (Clarkson) who is a fragile soul herself having lost her son before the movie starts (hence it's not really a spoiler, lol!) and is in rocky condition.

It's a story of how we need each other. "What are we here for, if not to help each other?" ~ G. Elliot
12 people found this helpful
Report abuse

ElizabethReviewed in the United States on July 23, 2016
4.0 out of 5 stars
Sleep Aid
Verified purchase
A sweet, nonviolent, relatable, non-pretentious film. I actually really enjoyed watching it.

Sleep aid rating: five stars. I fell asleep to this film at least seven times before I got through it. As someone who watches movies to help me fall asleep, this is a good thing.

Although it's praised very heavily for being so much like real life, and in many ways this is accurate, I found that it was a little unrealistic. Finn wants to be left alone, and repeatedly rejects the people who want to befriend him. They are determined to be his friends, though, and they keep on persisting until he finally lets them in. In real life, though, being strongly introverted usually turns other people away. Nobody will force a friendship on another person. That said, it's not a bad idea to be persistent in trying to befriend someone. This film highlights the fact that people need human connections, and that there's no reason to isolate yourself from others.
10 people found this helpful
Report abuse

Joe GingrasReviewed in the United States on October 19, 2019
4.0 out of 5 stars
This movie describes a relationship of three individuals ......
Verified purchase
I have watched this movie before and it shows how different people can get together . It is serious.... at times a bit heart breaking. The communications between the main characters are really comical. The music is perfect. The best part is that they really need each other and become the best of friends. The bad part …..one smokes pot and then its shared ……. we don't need to encourage drug use.....or the smoking of cancer sticks..... People that smoke weed or cigarettes are risking their lives and all to often they die.....
Report abuse
See all reviews
Back to top
Get to Know Us
Make Money with Us
Amazon Payment Products
Let Us Help You
EnglishChoose a language for shopping. United StatesChoose a country/region for shopping.
© 1996-2021, Amazon.com, Inc. or its affiliates