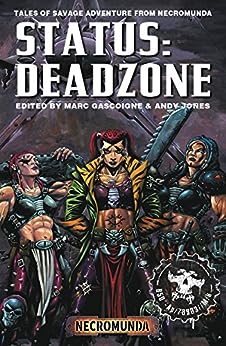 In the nightmare industrial underworld of Necromunda, brutal gangs clash in desperate battles to increase their standing with the rich decadent families who occupy the uppermost spire of the teeming hive city. Every day in the Underhive brings danger, battle and untold horrors, a few of which are covered in this anthology of Necromunda short stories. From Nathan Creed's attempts to hunt buried treasure beneath the sump to desperate clashes between rival gangs, this is a must-read collection of action-packed tales.

CONTENTS
Badland Skelter's Downhive Monster Show by Matthew Farrer
Bad Spirits by Jonathan Green
A World Above, The Daemon Bottle & Rat in the Walls by Alex Hammond
Descent by Simon Jowett
Rites of Passage by Gordon Rennie
Sisters by Neil Rutledge
The Day of Thirst & The Lake by Tully R. Summers
Mark of a Warrior by Richard Williams

Read it Because
It's full of bite-sized chunks of Underhive action, many of which haven't seen the light of day for years, making it the perfect way to celebrate the release of a new edition of Necromunda!

4.0 out of 5 stars
4 out of 5
14 global ratings
How customer reviews and ratings work

There are 0 customer reviews and 14 customer ratings.