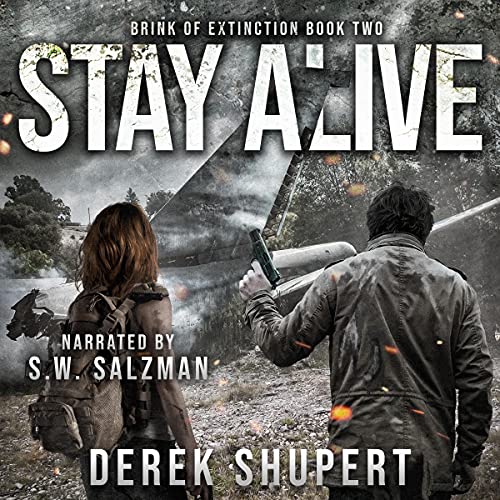 Derek Shupert (Author, Publisher), S.W. Salzman (Narrator)
4.3 out of 5 stars 100 ratings
See all formats and editions
Sorry, there was a problem loading this page. Try again.

In the gray new world...crossing the country is a gauntlet of death.

Can they survive the journey?

Cory’s family was his first concern. He had to get home, but Indiana was more than 2,000 miles away, and he had only one question: What dangers lie ahead?

The warmth of the sun faded.

When the temperature dropped, panic set swept the world. Fears of doom terrified the masses. Gangs roamed the streets. The girl he had helped had proved to be a valuable travel companion. Cory has no idea what Anna isn’t telling him.

Will her past help them or be their downfall?

Someone was on their trail.

You’ll love this second book in the Brink of Extension series, because we find out the changing weather may be more dangerous than Cory and Anna know.

Ali Maloney
5.0 out of 5 stars Can’t Stop Reading!
Reviewed in the United States on May 21, 2021
Verified Purchase
I’m hooked! Great storyline. Love the characters! Lots of action! I’m tearing through the series and can’t wait to read what comes next!
Read more
Helpful
Report abuse

Zippy Inger
4.0 out of 5 stars Tons of action.
Reviewed in the United States on February 27, 2021
Entertaining story. Tons of interesting characters with constant action. Well written with a violent plot. You really should read the first story to understand everything that is going on but it's not totally necessary. No graphic sexual content but as I said, a lot of violence. I recommend for late teens and up. I received an advance review copy for free, and I am leaving this review voluntarily
Read more
Helpful
Report abuse

Lisa Elliott
5.0 out of 5 stars Lots of action
Reviewed in the United States on May 21, 2021
Good book 2 of series, it had everything that we have come to expect from this author. Fast pace action filled storyline. Looking to see how it all ends with book 3. Get the books and leave your reviews.
Read more
Helpful
Report abuse

PJ
4.0 out of 5 stars A Great Series
Reviewed in the United States on February 26, 2021
I'm looking forward to the next book in the series.
Read more
Helpful
Report abuse

Pat
3.0 out of 5 stars A So-So Read
Reviewed in the United States on April 5, 2021
Stay Alive is an okay read.
Read more
Helpful
Report abuse
See all reviews