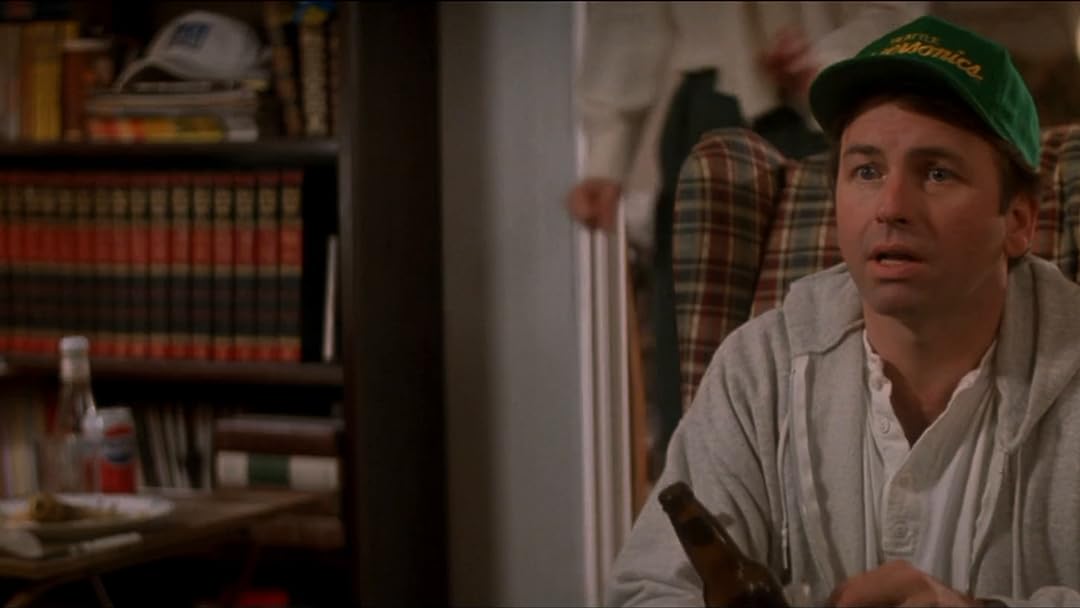 (969)
6.31 h 28 min1992X-RayPG
A husband and wife are sucked into a hellish TV and have to survive a gauntlet of twisted versions of TV shows they find themselves in.

Snake PlisskenReviewed in the United States on February 18, 2019
5.0 out of 5 stars
Jack Tripper
Verified purchase
This movie is the best. The guy that watches TV is the best and was in The Bride of Chucky but was a mean cop but he died I think and he was in Sling Blade. He lived in Sling Blade but was friends with the goofy guy that was in Armageddon and Bad Santa 2. The wife is kind of mean to the TV guy but he watches a lot of TV I guess. The bad guy is the principal from Ferris Bueller's Day Off. He wears makeup in this movie but whatever. He probably wears makeup in real life too from what I've heard but he's cool so I don't really care. This movie is like $23 but you can watch it every day of your life. If you buy a $23 Taco pizza from Godfathers you can not eat it every day. The movie is a good deal if you like Jack Tripper more than pizza. Just buy this movie and get a Jack's pizza for like $3.
41 people found this helpful

Kathryn G. BrookeReviewed in the United States on February 12, 2019
5.0 out of 5 stars
Interdimensional Cable: The Prequel!
Verified purchase
Lets see...how to market this for current kids. Well, watching this many, many years later I found myself thinking of Rick and Morty Interdimensional Cable! Haha. That aside, the film is somewhat dated. I guess replace cable with youtube or the internet and it would still be relevant. But it doesn't really matter. It's a fun movie. The kids in the movie and their acting is a bit cringey. But it doesn't linger. Cool sets. Cool special effects. Cool tv themes. Cool early 90s movie!

I feel this movie should be packed with Mom and Dad Save the World. Just the icing on the cake in my opinion.

Dereck M. PritchardReviewed in the United States on February 8, 2019
4.0 out of 5 stars
Wonderful film! Blu-ray has a drawback.
Verified purchase
Recently bought the bluray for Stay Tuned. I love this movie.

Picture is great, sound is great.

However, I have one gripe. Not about the movie itself or anything regarding my transaction with Amazon.

I watch a lot of my movies with Subtitles. There are no subtitles for the blu-ray copy of this!

Apart from that, I'm so excited I found this on blu-ray and added to my collection!

Lady DayReviewed in the United States on June 20, 2020
5.0 out of 5 stars
Great send-up! "Idiocracy" lifted a bit from this film!
Verified purchase
Not sure how I missed this one in 1992, but it popped up in my Amazon Prime recommendations, so I decided to take a look. Really happy I did! I always loved John Ritter and he is perfectly cast in this whacky send-up of television and movies (but I sure wish someone else had been cast in Pam Dawber's role - someone with more wry comedic chops...). Playing Ritter's devilishly evil nemesis is Jeffrey Jones ("Ferris Bueller's Day Off;""Amadeus"), who knows how to deliver a scene with just the right amount of satire and menace. (Look for an illusion to "Dr. Strangelove" in one of his later scenes!)

The film is so well-written with many of the same crazy off-the wall TV parody elements as "Scrooged."

BUT one of the most interesting bits was the "Napper Crapper 9000"!!! Same "easy chair toilet" concept as we saw in "Idiocracy" FOURTEEN years later!

All in all, a hidden gem of a film, especially if you can relate to every single TV (and movie) parody offered up in "Stay Tuned."
3 people found this helpful

Rob SimmonsReviewed in the United States on June 16, 2020
4.0 out of 5 stars
John Ritter and Pam Dawber = comic brilliance!
Verified purchase
This is a little gem of a comedy. John Ritter, known for his perfectly timed physical comedy, is at his charming, slapstick best. Pam Dawber of 'Mork & Mindy' fame gets to be feistier here and relishes it. Also featuring the perfectly smug Jeffrey Jones and the wonderfully smarmy Eugene Levy. Some of the highlights include the brilliant Chuck Jones (of Warner Bros cartoon fame) supervised animated segment and some spot on parodies of then-popular network TV shows and commercials; the best among these is when Ritter's character ends up in a sendup of 'Three's Company' -- it's deliciously meta when John (Jack?) realizes the latest circle of Hell that he's trapped in. It would have been just as funny to include a 'Mork & Mindy' spoof but that ay have been overindulging. This is far better than a lot of comedies from this era in that there are actual moments of comic brilliance -- who knew? Come for the campiness, stay for the fun performances!
4 people found this helpful

Memento_MoriReviewed in the United States on August 13, 2020
4.0 out of 5 stars
[SPOILERS] Classic Storyline Done Right
Verified purchase
Nowadays, classic storylines tend to be synonymous with lazy writers. We get derivative nonsense that colors their script in by the numbers and it's annoying that you can tell what's going to happen from a mile away. It's just....sad. Disappointing. Outrage that people get paid to be so lazy with their creativity.

You won't get any surprises from this film. You won't get any jokes that are one of a kind, though the witty satanic tv shows are great. But you WILL get a classic "Dumpy husband and neglected wife re-kindle their marriage through tribulation" storyline with some cute touches and outright funny lines. The good guys win, the bad guys lose, and the script is obvious. But the thing is, it's done well, so you WANT Roy and Helen to win. You WANT Spike to lose. And even though you knew it was going to happen, you cheer when it does.

I only rate 4 stars because I reserve 5 stars for perfect movies. A couple lines really show their laziness, and there are a few moments where the movie's age shines through. And the ending is pretty rushed. It's almost like we got to Act 3 and the screenwriter didn't *quite* know how to end the movie, so they did threw some stuff together and hoped it'd figure itself out. But the clever television shows and the conceit continuously carry you through.
2 people found this helpful

Andrew "Big Ugly' HaleReviewed in the United States on July 31, 2020
4.0 out of 5 stars
Entertaining idea.
Verified purchase
I'm reminded of Honey I Shrunk the Kids, except this time the parents are shrunken into a television hell. Or even Bill And Ted's Bogus Journey into hell. The different scenes that the couple are thrown into are interesting in some regards but the cartoon mice and the Salt-n-Pepa video were entertaining.

The narration and parodying of TV shows critiques the amount of time people waste watching TV, ironically being preached from a movie. The hellish atmosphere also appears to be a crack at the Hollywood scene of slimy bad men looking to steal a fresh new soul. It's pretty relatable of the husband that after a long day of exhausting work, lack of successful deals, that coming home to relax and be mindlessly entertained by shows and sports is a type of peace. But you still have a family to engage. Even better, a willing attracted wife.
One person found this helpful

JCReviewed in the United States on May 5, 2019
5.0 out of 5 stars
classic movie finally on Blu-Ray
Verified purchase
so this is a quirky movie that has the late john ritter staring in a quite funny comedy about a slob couch potato that has just bought a new cable (satellite dish lol) service that is actually a sneaky way for the underworld to collect souls, long story short they go from 80s and 90s tv stations as they call them but are parodies of said time frame with shows and what not, plus a fun animated bit in there from chuck jones which has the zaniness of a tom and jerry cartoon from way back when, this is much better priced then that overpriced DVD which for whatever reason they printed in limited numbers or someone grabbed them out of the bargin bin by the cartfulls
One person found this helpful
See all reviews
Back to top
Get to Know Us
Make Money with Us
Amazon Payment Products
Let Us Help You
EnglishChoose a language for shopping. United StatesChoose a country/region for shopping.
© 1996-2022, Amazon.com, Inc. or its affiliates