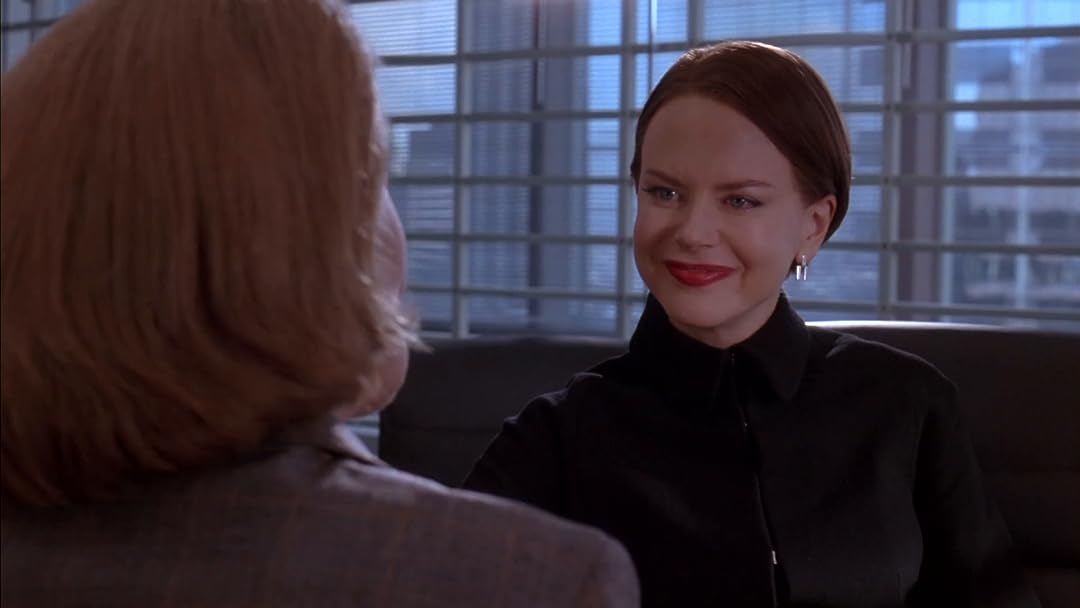 (2,462)
1 h 32 min2004X-RayPG-13
A TV executive relocates her family to the overly manicured suburb of Stepford but soon begins to suspect that something is not quite right.

J.A.GReviewed in the United States on January 20, 2021
5.0 out of 5 stars
Hilarious and probably a sign of the times.
Verified purchase
This is hilarious, Bette Midler gave me a few laugh-out-louds. How can anyone not find this a must see. I feel like this is what many men would like to see in a wife. I can see why men find this movie horrible, because their secret wish is uncovered,haha!
I love the end scene with Glenn Close talking about Connecticut (I live there), and I laughed so hard!
I sense this is what a man would like to do to the world, make us all controlled robots....sign of the end times..!
See this movie and contemplate.

***A few adult scenes, but not too much "leg". Nice to not hear a lot of swearing in a movie, good entertainment.

BryMReviewed in the United States on February 3, 2021
5.0 out of 5 stars
EXCELLENT REMAKE
Verified purchase
Ordinarily I don't like movie or TV show remakes that don't stick to the original premise, but after watching this when it first came out I made an exception.
Anyone who watched the original 'Stepford Wives' will understand [no spoilers, sorry!] when I say that the ending in the Nicole Kidman version is MUCH better than the 1975 release.
On a side note, if anyone ever wants to see the REAL Stepford, complete with robot wives [and children, all of whom are named Kirsten and Jacob] make your way to Cary, North Carolina and stay for a day or so! 😵🤣
6 people found this helpful

MariusReviewed in the United States on August 25, 2020
3.0 out of 5 stars
Pretty entertaining with major plot holes
Verified purchase
The cast is stellar and the movie is funny and entertaining but I have a hard time getting over egregious plot holes that ultimately make the movie feel like cobbled together slapstick.

- It's implied that the men turned their wives into subservient robots because they were overachieving wives (CEOs, business moguls, writers, celebrities, etc.) and the men have an inferiority complex and want subservient wives. However, the gay husband guy is reprogrammed from an effeminate hipster into a masculine guy running for senate. What?? Completely random inversion. Then the implication suddenly switches from "achiever to subservient" to "unhappy and ugly to subservient, happy and hot" which still doesn't apply to the gay guy or those CEO wives. So the motive is all pretty random and confusing.

- Were they robots or not? At one point it shows these definite body clones, so you get the idea that the real persons get hidden somewhere and replaced with robot clones. At one point one of the wives puts her hand in fire without noticing it, and her hand doesn't seem to be getting burnt, which confirms the robot thesis. Also there are several scenes where the wives "glitch out" in hilariously mechanical ways, and there's a button on the remote control that enlarges their breasts. Also, they glow like lightbulbs. Despite all this, it actually turns out that they are NOT robots, but they are the real people with chips implanted in their brains. What?? Oh but wait, Christopher Walken IS a robot.
3 people found this helpful

E. LedaReviewed in the United States on March 8, 2022
1.0 out of 5 stars
Is this the worst move I've ever seen? It might be!
Verified purchase
A completely vacuous movie with absolutely nothing to say about anything, no suspense, and a baffling and pointless “twist” ending that must have been tacked on at the last second.

The bad choices that were made at every level are almost astonishing, especially when they had such rich source material to draw on. Ira Levin’s book is creepy and suspenseful even if you already know the ending, and it has brilliant things to say about power and privilege; progress and the backlash against it; sex and domesticity; media manipulation; and how women’s mental health has been disregarded and weaponized.

Although all of these themes were still fresh and relevant when this trash movie was made, if Frank Oz wanted to “update” or “modernize” the story, there are so many interesting directions it could have gone – what about a deeper exploration of the racial dynamics in this world? What about more subtle forms of mind control, social conditioning, or genetic editing, if robots felt too dated?

The stakes felt very low for this version of Joanna. In the book, the fear builds slowly as Walter isolates and gaslights Joanna, forcing her to question her own sanity. The final betrayal is terrifying. This Joanna? Who even knows what she wants, what she fears; who she trusts? Is Walter a good guy here? What is even happening?

RubyCReviewed in the United States on February 3, 2021
2.0 out of 5 stars
Not nearly as good as the original
Verified purchase
Nor as shocking. When the original was made it was a biting commentary on what was going on in suburbia and how women were literally demeaned on a daily basis, nothing more than domestic servants and baby making machines. Not until 1974 with the Equal Opportunity Credit Act were they even allowed to get a loan without a co-signer. It wasn't until 1972 that Title IX of the civil rights act was passed so that high schools, colleges, and universities were required to provide equal opportunity for women in sports.
THIS version of The Stepford Wives is pretty much no more than a mockery.
4 people found this helpful

Hakuoki_fangirlReviewed in the United States on November 5, 2020
4.0 out of 5 stars
A Comedic Twist on the Original Horror
Verified purchase
Originally a satirical thriller by Ira Levin, this movie turns it into a satirical comedy. Filled with a dazzling cast, it nevertheless does a fantastic job sticking to the core message. It points out the social issues in relationships, many of which are still applicable.

If for whatever reason you don't want to read the original book, I stronly recommend watching the 1975 film along with this one. It took the horror route and has a completely different ending. They're different enough, you won't get bored even if you watch them back-to-back. (I watched them one night after the next.)
2 people found this helpful

nettiegurl16Reviewed in the United States on June 30, 2021
5.0 out of 5 stars
WAY better than the 1975 original
Verified purchase
This updated version far surpasses the original. Its funny, entertaining, insightful. Kidman dead on hits the mark as Joanna, who is fierce, strong, and vibrant for a change. Not a boorish washy housewife, and Bette Midler is a hoot as Bobbie, who made me laugh out loud. The male cast was equally credible, and I've never been a Matthew Broderick fan (who IMO cannot act) but pulled his own here. The ending by far was the true kicker. With the ladies fighting back (Sorry...spoiler) for a change.

Brian CurtisReviewed in the United States on December 9, 2013
2.0 out of 5 stars
Great cast, good editing, good music... all wasted on a terrible story
Verified purchase
As many others have pointed out, the plot holes in this movie are obvious. But they're also indicative of an uncertain theme that underlies the whole effort--what kind of story are they trying to tell here? As reviewers Ben Burgraff and "Free Thinker" (among others) pointed out, it's hard to tell who to root for other than Matthew Broderick's character, Walter.

The first part of the film takes great pains to establish that Kidman's character, the protagonist Joanna, is a -horrible- person. Absolutely awful. After building up a career by ruining lives, she has a breakdown and is removed to a remote suburban community to recover. If the lead were a male, this would be a standard setup for a "heartless executive learns to rediscover his humanity" plot... and to a point, it seems to head that direction. But Joanna soon connects with two likeminded Manhattan exiles--Bette Midler's "Bobbie" and Roger Bart's "Roger"--and they reassure each other that being a heartless, hateful, black-clad cynic really IS best. That is, until one by one they're abducted and modified by the mysterious Mike and Clare Wellington.

OK, so we're in 'careful what you wish for' territory; fine. But no... Joanna (remember, a horrible person and a clear VILLAIN) makes a final appeal to her husband, and he decides that he wants his cold, obsessive, and cruelty-driven wife back the way she was, and collaborates with her to undermine and destroy the Stepford project. And I'm making this sound like a serious thriller, even though it comes across as mediocre camp comedy overall, with especially jarring and ugly 'comedic' turns by Bette Midler, who is really MUCH better than this.

So in the end, Glenn Close (playing a truly bizarre Clare Wellington, and demonstrating a range I never expected of her) is defeated; Christopher Walken (largely wasted potential in his feeble role) is revealed as a robot himself; and the Manhattan Cynics Club is reunited on Larry King, where they've clearly not only learned nothing, but Midler's Bobbie is even praised and rewarded for re-embracing her hatefulness. Clare pretends to worry about her kids at the climax, but they vanished 20 minutes into the show and never appear again, even at the end when she's supposedly "reunited with her family." Walter remains in the shadows offstage, giving a thumb-up to his Type A, hyper-obsessive wife back to her old tricks. So what was accomplished?

These are excellent actors all around, and even newcomer Faith Hill turns in a decent performance. The music and direction work well; the sets are impressive and correctly deliver a just-barely-over-the-top tone to the whole Stepford community: just -slightly- too perfect. But the story is a mess; it's clearly not horror, but as a comedy it utterly fails to be funny. The character of Joanna has learned nothing, Walter decided that standing up for himself was a huge mistake, and Mike's ideal of living the good life turned out to be a dumb hoax by a robot anyway, enabling Bobbie to reiterate her earlier point: men are weak and stupid. Men suck.

Now, what's funny about that?
4 people found this helpful
See all reviews
Back to top
Get to Know Us
Make Money with Us
Amazon Payment Products
Let Us Help You
EnglishChoose a language for shopping. United StatesChoose a country/region for shopping.
© 1996-2022, Amazon.com, Inc. or its affiliates