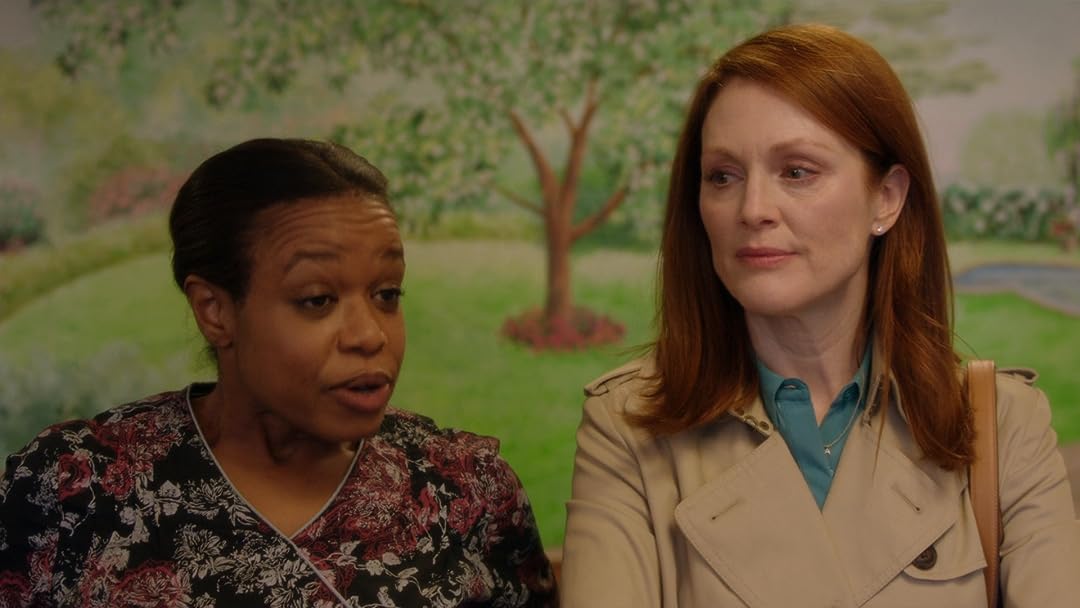 E. B. KoganReviewed in the United States on April 9, 2019
2.0 out of 5 stars
A Cleaned Up Hollywood Version of a Horrific Disease
Verified purchase
I suppose if you never had any first hand experience as a caregiver for an Alzheimer's patient you might find this film sad. However, as a caregiver for the last 10 years, this film was very disappointing in the way in which this disease is portrayed. Alzheimer's progresses in stages from early mild cognitive dysfunction to late stage. The way it is shown in this movie is all over the place. While it is true that it effects people differently, some things remain the same and the stages that a diagnosed patient will enter and leave are not shown accurately at all in this movie. I can cry easily when reliving various moments of my partner's journey through this horrible disease and watching this movie version just made me angry as it is so inaccurate and "whitewashed." If you have never know anyone afflicted, go ahead and watch this film, however, if you have ever personally dealt with caring for a loved one with dementia, please don't waste your time watching this film. This in no way depicts real life with dementia!
35 people found this helpful

♤ Pain ₩arrior ♤Reviewed in the United States on June 23, 2021
4.0 out of 5 stars
Julianne Moore is Outstanding!
Verified purchase
Julianne Moore is impeccable in this film! Her portrayal of a linguistics professor struggling with early onset Alzheimer's is emotional and believable. However, I think there were many missed opportunities due to this being a very Hollywood version of the devastation that the disease truly leaves in its wake. There isn't enough conflict, not enough tension, not enough palpable personal and interpersonal stress to ring true. There is a scene where I teared up but I wish they had chosen to take more risks to show the uglier side of Alzheimer's.

This is a really well made movie with great actors. I am someone who lost much of my short-term memory during the worst of my chronic illness, so I can empathize to a point. But I am fortunate to be generally healing now rather than mentally deteriorating. I can only imagine how horrific things could get with Alzheimer's, and this movie just seems to explore beneath the surface. I wanted to see a full dive, with water up the nose and all. Regardless, I would recommend "Still Alice" to anyone looking to see a dramatic, high quality film about the fleeting nature of life and the fragility of the human mind. I'd give it 4.5 stars.

Sony_XLReviewed in the United States on June 1, 2015
3.0 out of 5 stars
defined by her intellect
Verified purchase
The real depredations of Alzheimer's disease and its toll on the families of the afflicted are not on display in the flawed drama.

"Iris," the 2001 film that starred Judi Dench as British novelist Iris Murdoch, was particularly frank about the effects of the illness, both mental and physical. It also highlighted the special tragedy when someone who has built a career as a communicator falls prey to the affliction.

"Still Alice" should, by contrast, carry the label "Sanitized for your protection." Everyone involved is highly attractive, articulate, compassionate and virtually devoid of any flaws that would mark them as human.

What's left is a sensitive and appealing performance by Moore as Alice's mind fades from early onset Alzheimer's; her character has just turned 50. As for the rest of the story, adapted by directors and co-writers Richard Glatzer and Wash Westmoreland from Lisa Genova's 2007 novel, it has plot holes large enough to accommodate a Mack truck.

Another daughter, seems to be making bad choices both in her romantic life and as a budding stage actress. What happens next? We're not told.

Husband John bears every crisis with a preternatural calm, even when he's planning to pull up stakes from New York and move to a job at Minnesota's Mayo Clinic. Surely he must have strong emotions about his wife's illness. But, if so, they're never shown.

Having always been defined by her intellect and adept use of language, Alice is sometimes reduced to making speeches about her frustration. "Sometimes I can see the words hanging in front of me and I can't reach them, and I don't know what I'm going to lose next."

She learns to get by using her cellphone as a reminder of tasks, and the online game "Words With Friends" to shore up her vocabulary.

Alice has also made a video giving her future self instructions on how to take her own life. Her eventual attempt to do so goes awry. Yet any moral or even dramatic ramifications from this line of conduct are ignored in the movie's final -- and perhaps most glaring -- default.

SheriReviewed in the United States on July 24, 2019
5.0 out of 5 stars
Utterly moving!
Verified purchase
Get your hankies out....this one is so touching and heart wrenching that you will ask yourself why it was not a blockbuster. The theme of living with the devastating reality of early Alzheimer's disease is woven so beautifully into the story about an exceptionally talented family of intellectuals. It would be a wonder if any viewer did not find themselves relating to it in some way, to some family member of friend. This disease is so prevalent in our society and carries such a stigma, that is it high time it was brought to light in such a tender and respectful manner. Touching and beautiful, with outstanding and talented actors portraying the characters, one of the best movies I have seen. Believe it or not, this may be fairly close to being as good as the book. (I do give the edge to the book however. Read it if you like the movie!).
5 people found this helpful

Jourdan CalderonReviewed in the United States on December 19, 2018
5.0 out of 5 stars
Tearjerker...
Verified purchase
I probably shouldn't have watched this since my mother passed away a few years ago from this very disease. It's horrible! I am close to Alice's age now, as well as being a college professor. This movie really hit home! Lately, I have had memory issues and had some tests run to see if I was possibly getting early onset dementia since it can be genetic. My doctors said I was fine, but in the back of my mind...the fear will always be there. Seeing my mother go through that was extremely traumatic. I wouldn't wish that disease on anyone. *Have a box of kleenex with you if you intend on watching this. Julianne Moore is phenomenal! A++++++
6 people found this helpful

QuintinaReviewed in the United States on March 23, 2021
5.0 out of 5 stars
Alzheimer's
Verified purchase
I purchased this movie for a resident i had...his wife had Alzheimer's which he couldn't understand to a degree...working with Alzheimer's patient's is difficult but whrn they get it dr.s dont explain in fully of what will happen from the attitude change the ups and downs the sundowners effect to the full moon effect Everything....after his wife passed i bought this for him so he could actually sit down and watch at his convience of what another family goes thru with it also... He was grateful and understood. But misses her😪😪
3 people found this helpful

errin spellingReviewed in the United States on April 14, 2021
5.0 out of 5 stars
she has a loving family
Verified purchase
alice has 3 normal children and a loving husband. it's a nice story, that they don't make too upsetting. they don't really show what happens, when a person doesn't know their own child or husband and screams at you.here they just say, this is your daughter remember and you politely say yes. but alzheimer's patients are confused and terrified and just saying i am your daughter, doesn't make it so and they often scream at you.families don't always have the strength or knowledge to deal with this at home.
3 people found this helpful

Phillip41Reviewed in the United States on November 12, 2020
5.0 out of 5 stars
For families dealing with dementia in a loved one
Verified purchase
What is it like to develop dementia, or to see it develop in a spouse or family member? Julianne Moore in a powerful performance gives an unapologetic and realistic presentation of the irretrievable descent into dementia. The story is true and will educate its audience into the reality of life with Alzheimer's, Lewy Body (like Robin Williams), Parkinson's, and the other less-known neurodegenerative diseases. Required viewing for families in this most difficult circumstance. Bring a Kleenex. But the ending is not tragic but rather uplifting without become saccharine.
One person found this helpful
See all reviews
Back to top
Get to Know Us
Make Money with Us
Amazon Payment Products
Let Us Help You
EnglishChoose a language for shopping. United StatesChoose a country/region for shopping.
© 1996-2022, Amazon.com, Inc. or its affiliates