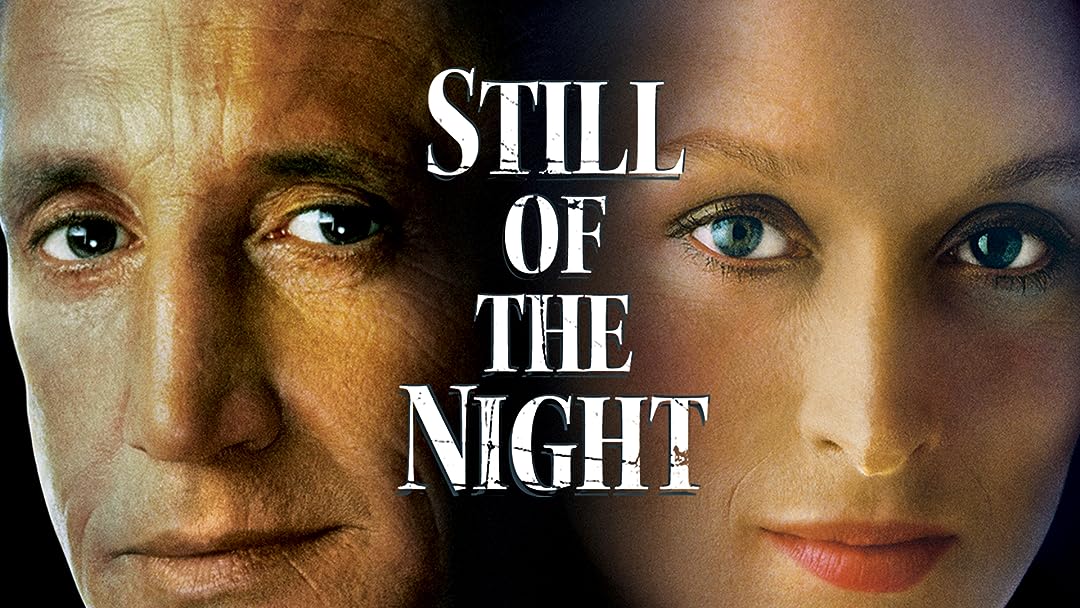 Still of the Night

GabeReviewed in the United States on June 24, 2019
2.0 out of 5 stars
Meh,... I really should like this more than I do,...
Verified purchase
With Meryl Streep and Roy Scheider, you'd think this film was bound to be brilliant, but you'd be wrong. The first half is fine - good set up, nice pacing and plot, effective storytelling. Then the "action" begins late in the third act and you can't even really tell. There's so little intensity that it's hard to tell that we're concerned about a murder here. Not only that, but the reveal isn't very interesting as the "clues" that were dropped along the way never really pointed at anyone (or rather could have pointed at anyone of a number of people that we never spent more than a few moments with, so how were we supposed to know, much less care. To cap it all off, the ending is brutally expected and ho-hum. I won't spoil it, but it feels like the writers spent weeks on the story and about 15 minutes figuring out how to end the film. Just doing the ending some real justice would have made the film worth praising. All in all, if you want a thriller worth watching, try Fatal Attraction. That has a lot of similar style elements but does them so much better.
17 people found this helpful

A. Film LoverReviewed in the United States on November 5, 2021
1.0 out of 5 stars
Hitchcock my butt cheeks
Verified purchase
There is not a single thing in this film worthy of Mr. Hitchcock. Just because you throw in a few references to his film does not make your film Hitchcockian. Robert Benton is just about the last person who should be making a Hitchcockian suspense film. Meryl Streep considers this the worst film she's ever made and she's right and she's not good in it. Roy Scheider is the least Hitchcockian leading man you could have. Mr. Benton has no clue how the subjective tracking shot works, but boy does he try and fail at it. The only way he can get you to jump is by a screechingly loud sound out of nowhere, something Mr. Hitchcock never did because he was, you know, a brilliant filmmaker. The supporting cast is horrible and amateurish save for Jessica Tandy, who's always fun to watch but here is given nothing to work with.

And then there's the score. Of course, when making a Hitchcockian film you hire a person who has no knowledge of film scoring at all, John Kander. He's a brilliant Broadway composer, not a film composer. So, what do we get - a film with almost no music at all, which kills it from the start. Mr. Kander has basically written a song without lyrics that has nothing to do with this film.

In the end, it's laughable. Are we supposed to be surprised at who the villain is? More importantly, since we know nothing about this person, are we supposed to care? Mr. Hitchcock was about suspense, not surprise. The ending is ludicrous. And yet, we have many people here giving this piece of dreck four and five stars. Which shows you just how low audiences and people have sunk. No one should think this is a good film.

johnconningReviewed in the United States on April 5, 2019
1.0 out of 5 stars
great cast wasted
Verified purchase
North by Northwest mixed with Vertigo, stir in a lot of boredom and a story arc worthy of Republic Pictures and you have a total waste of time and talent.
21 people found this helpful

wild oakReviewed in the United States on October 20, 2021
2.0 out of 5 stars
This movie is so disappointing
Verified purchase
With such a strong cast, how could this movie turn out so poorly?? As it turns out, the movie is so mediocre that someone should be paying me to watch it. Albeit a solid cast, performance of both leads are so wooden. Streep did try but Scheider just wouldn't engage. Screenplay is so weak, with non-existent character development through 98% of the screen time, and then it's as if the screenwriter suddenly remembers that he has explained what the big fuss about the great big secret of Brooke, so in the last 15 mins, she was made to do a monologue to SPILL THE BEANS. And the way Scheider's psychiatrist suddenly figured everything (from who the killer is, and the why, how), it's almost comical. The directing seems to have forgotten to add soundtrack to 95% of the movie either. All in all, this is such a big waste of time. I have to force myself to sit through this, just to see how bad it could ever be. All in all, if you're looking for a femme-fatale psychological noir/thriller, SKIP THIS MOVIE and watch Sea Of Love, or Fatal Attraction, or even Basic Instinct.
3 people found this helpful

Maddie's momReviewed in the United States on July 23, 2021
4.0 out of 5 stars
Cinema not a movie
Verified purchase
I've watched this film a couple of times and remembered it while in a conversation with a friend over the abysmal state of entertainment.
This is a gem of a picture I adore Roy Schreider in this sadly his roles tended towards action be it Jaws or other less notable films
I think possibly the industry didn't see him as a leading man in anything but action adventure films yet another example of myopia by Hollywood
This film builds slowly so if you have to have a car chase or someone running from a serial killer every 15 seconds this isn't for you
However if you like a quiet film that asks to wait for the story to unfold then pour yourself a good Cabernet and ENJOY
Yes this has plot issues and pacing in the finale but my gosh they're actually acting not relying on a computer to wow the audience visually as we're asked to digest a story line worthy of a toddler no SUPERHEROES in this film or a romcom so predictable you know the ending in the first 3 minutes
Meryl Streep plays demure and yet dangerous very Vivian Lee
Jessica Tandy is a supporting actress in this so for her to take the part should signal lovers of cinema to give it a look
One person found this helpful

rebekah naphiah alessiReviewed in the United States on January 30, 2020
5.0 out of 5 stars
It's great!
Verified purchase
This is really a fabulous movie​, not in the least disappointing. If the through-line is vaguely predictable, that adds to the ruffle of intrigue, fun and suspense that styles and sustains the film.

It's a pleasure to see Ms Streep so unadorned by status, almost insane and her wave of carnal allure between herself and Mr Scheider is super sexy.

With New York as a background, dare I say: "fabric"?, the whole thing is very satisfying. We get to see lots of imminently successful actors in small and not so small roles: Larry Joshua as an unlucky mugger and Mr Joe Grifasi as a police detective in the vein of illustrious Italian New York City detective Joseph Petrosino. We even get to peer inside Christie's auction house with another name.

Ms Streep's character lives on the upper East side, off of the park and it's lucky for us, if not every character that we get to see all of this beauty.

In the trivia, it says it was considered to have filmed this story in black and white, that'd have been interesting!
2 people found this helpful

lawyeraauReviewed in the United States on June 24, 2019
2.0 out of 5 stars
HITCHCOCK MUST BE TURNING OVER IN HIS GRAVE...
Verified purchase
This film had a good cast but a weak plot. Supposedly, it is a homage to Hitchcock. If so, Hitchcock must have turned over in his grave, when this film was released, as it a poor homage, indeed. The film is utter nonsense.

A psychiatrist (Roy Scheider) loses a patient, when that patient is found murdered. The police then come to the shrink for info but mum's the word, due to doctor/patient confidentiality. Then, a mysterious woman (Meryl Streep), one of the deceased patient's lovers and co-worker, appears in the shrink's office, requesting a favor regarding one of the personal effects of the deceased. Though there is no doctor/patient confidentiality with this woman, the shrink goes out of his way to keep this info from the police.

The shrink finds himself smitten with this woman. Unfortunately, this is a bit perplexing, and that is the true mystery of the film, as there is zero chemistry between them. The shrink also does not seem to have any qualms violating his deceased patient's doctor/patient privileges with this woman, when he recounts that patient's dreams to her towards the end of the film.

This film is a mass of inartful red herrings and hackneyed plot devices. It lacks true suspense and is just silly. Merry Streep is the only one that doesn't phone in her performance., but she alone cannot save this otherwise lackluster film.
6 people found this helpful

Okemos56Reviewed in the United States on May 3, 2019
3.0 out of 5 stars
Kinda meh
Verified purchase
This is an intelligent but ultimately unsatisfying homage to Hitchcock about a recently divorced psychiatrist who investigates the murder of a patient while simultaneously becoming involved with the patient's girlfriend. Unsurprisingly, she is his prime suspect in the murder. Here Meryl Streep is at the beginning of a glorious career, and already one can see the little mannerisms that she would rely on to show certain emotions. Roy S. is dull as the "stiff" psychiatrist, but then he's supposed to be. If there was a on-screen spark between these two, I didn't see it. The main problem is a weak plot that relies on several hackneyed plot devices and silly coincidences from the beginning when a detective shows up while the girlfriend is talking to Roy. It's occasionally witty as the stiff psychiatrist is a stand-in for Hitchcock and the psychiatrist's crime solving buddy is his mom, but it's hard to do a homage to Hitchcock that doesn't fall far short.
5 people found this helpful
See all reviews
Back to top
Get to Know Us
Make Money with Us
Amazon Payment Products
Let Us Help You
EnglishChoose a language for shopping. United StatesChoose a country/region for shopping.
© 1996-2022, Amazon.com, Inc. or its affiliates