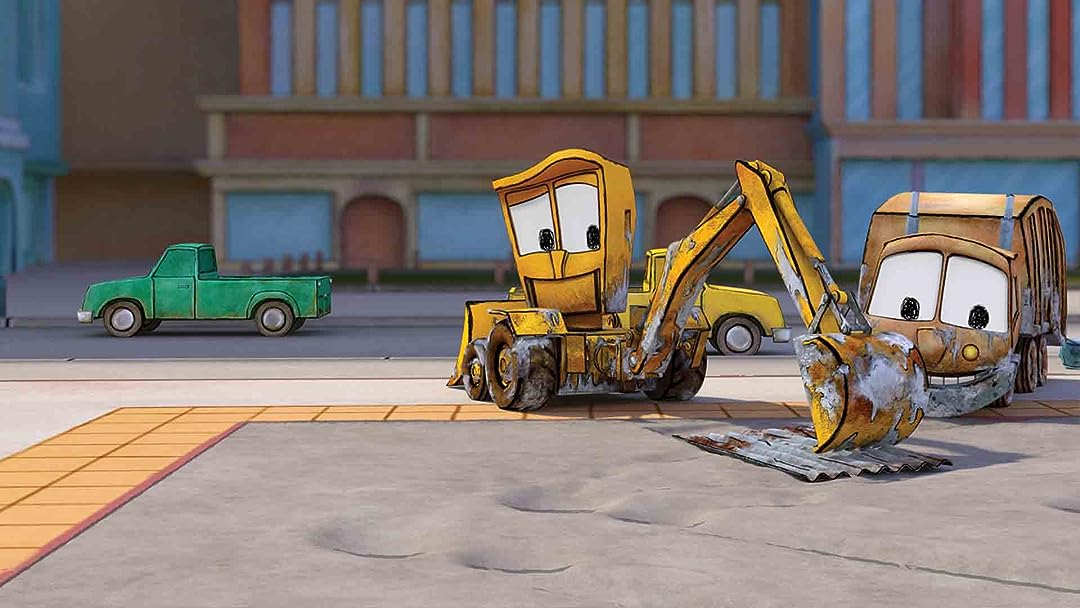 (7,430)7.42016X-RayALL
The adventures of best friends and unlikely heroes, Stinky the garbage truck and Dirty the backhoe loader, a dynamic and hilarious duo of resourcefulness that learn when things don't go as expected, asking "what if" can lead to success. Based on the books by Jim and Kate McMullan. Written and developed by Guy Toubes.

Gary D. CookReviewed in the United States on September 3, 2016
5.0 out of 5 starsso we wouldwatch this first episode about 87 times every day for ...
Verified purchase
So my three year old son has been watching this show since it came out which means we must have watched the first episide, which was all that was available, about a million times for a year. Just back to back to back the same first episode over and over. And if I turned it off, he would scream and cry, so we would watch this first episode about 87 times every day for like a year. Every night I prayed dear lord, please let them put out new episodes of stinky and dirty, please! I was at my wit's end. I felt hopeless. I was ready to end it all. And then this morning we woke up and he said those words I once dreaded to hear.. watch stinky & dirty please?! And when I went to turn on that same first episode of stinky and dirty again for my son, I felt sick. Here we go, another day spent watching the same episode I have seen so much my son & I both can repeat every word. But this morning was different, what did we find?! Any entire season with like ten new episodes!!! I have spent the last couple of hours while he has been entranced by the new episodes doing laundry, cleaning house, cooking breakfast, getting a shower, getting dressed, putting my make up on. Birds are singing, the sun is shining. And it is a beautiful day! Thank you Amazon for finally putting out some new episodes! In all seriousness this show has everything little boys love. Especially if you have a son like my son who is obsessed with machines and anything with wheels. It's got firetrucks! Cement mixers! Cranes! A show about a backhoe & a garbage truck?! That's his dream come true! The voice acting is so sweet, and the art style is unique and refreshing. And if I'm going to be stuck watching kids cartoons all day, I would rather be watching stinky and dirty than anything else.
39 people found this helpful
Report abuse

Piaw NaReviewed in the United States on November 16, 2016
5.0 out of 5 starsA smart show, much smarter than the books!
Verified purchase
I don't usually review TV shows, but The Stinky and Dirty Show has captured Bowen, and I'm not horribly unhappy about that, so I figure I'll talk a bit about why it's special as well as tie it to why Amazon doesn't care about killing Netflix.

The premise of the show is simple: a garbage truck (Stinky) and a bulldozer (Dirty) are friends. Through the course of an episode (about 11 minutes each, with each "streaming episode" being 2 episodes joined together), the two friends encounter problems and solve them. Most of the problem-solving involves brain-storming many "what if" scenarios before settling on the correct approach. Some of them involve calling in friends who can help, and many of the solutions are found through serendipitous observations. I can't watch an episode with Bowen without saying, "Wow, what a smart show for kids!"

What's more, Bowen's been brought up on a steady diet of shows where the protagonists are female (e.g., Nausicaa, Totoro, Frozen), so it was nice to introduce some diversity and have a show that's mostly about boys (sure, the vehicles are gender neutral, but names like Stinky and Dirty typically apply to boys :-).

Incidentally, we went and checked out the books from the library (it's an indication that the show has not yet hit the mainstream yet that the books are still easily available at our local library) and the books are disappointing and much worse than the TV show. No brain-storming or problem solving to be found anywhere in the books, which aren't nearly as smart as the Amazon show. How rare!

So the show's good and recommended. But why is Amazon doing this? The big factor that drives parents to become Amazon Prime customers is diapers. I once did the math and the savings from diapers alone pay for the Amazon Prime membership. But of course, kids do eventually grow out of diapers, and so after that Amazon needs something to hook families on them. While shows like Peppa Pig are easily found on Youtube (and free if you're willing to put up with ads), unique shows like The Stinky and Dirty Show could very well drive me to keep the Amazon subscription even after the littlest one is out of diapers. Here's the thing --- parents don't have time for TV/movies (we've long cancelled our Netflix subscription). As much as I'd love to watch the new Daredevil show, I just don't have time for it. But kids not only have time to watch shows, they keep watching the same show over and over. It doesn't take too many such shows before they become a "must-have" for the parents. This makes Amazon Prime a much better value than if it's just for 2 day shipping.

Shannon RepedeReviewed in the United States on October 29, 2017
5.0 out of 5 starsYour toddler should be watching this
Verified purchase
So excited another season will be out next month. My 3 yo son loves this show....I love this show! It focuses on figuring out challenges as a team with design, trail and error, then repeat; that it's ok to not get something right the first time, but keep trying and don't get frustrated. So important for little ones to grasp this. Also, I'm not a fan of shows that put kids into hyper drive with crazy super hero antics (shooting with shrink rays, jumping off buildings, throwing things to capture someone, and etc.) because my son seems to think he needs to run around and try all of that. Sure, it's fun, but he doesn't get anything productive from it and it drives me bonkers trying to explain why is not ok to walk up to someone and say you are shooting them (with a shrink ray). He finds this show super entertaining and after he watches it, he behaves like a proper human being. Priceless.
15 people found this helpful
Report abuse

Julie KashenReviewed in the United States on December 23, 2017
5.0 out of 5 starsMy Son's Favorite Show - Mom and Dad Approve
Verified purchase
My husband and I are so excited there's a season 2. My 3.5 year old son LOVES this show. It's adult-friendly too. Stinky and Dirty are good friends to each other and great, creative problem solvers. The characters all model kindness and helpfulness. There's a perfect amount of fun and silly in there too. I love the things that this show has inspired in my son - like saying "I have a great idea!" and "What if...?" Nothing in appropriate. And while the 2 main characters are male, there are some pretty badass female characters too. Very grateful for this show! And Season 2 is as good as Season 1!
14 people found this helpful
Report abuse

TyReviewed in the United States on September 19, 2016
5.0 out of 5 starsWhat if .... we made a cool cartoon about engineering
Verified purchase
My kids like it..and frankly I do to! The basic message is to creatively think your way out of a problem and don't be afraid to include space aliens in your solution set....and to be observant and help others. Oh and to throw a melon every so often. I like the use of the "what if" statement and the perpetual reuse of garbage in their solutions. While the show is a bit formulaic, the introduction of new characters keeps it fresh and the characters are endearing. I also like the general focus on real physics, albeit impractical, it does teach a practical problem solving approach. By this i mean the solution doesn't end at get a space laser, it's use this pipe as an axel and cable spool as a wheel. I like the morse code in the background when dirty makes a radio call, nice touch. I hope they do a few more seasons. I would like to see other characters lead the thinking, especially the female voiced ones for my daughter.
9 people found this helpful
Report abuse

John ShoemakerReviewed in the United States on September 28, 2016
5.0 out of 5 starsGood show for kids
Verified purchase
My 18 month old grandson loves trucks. When I saw this show on the Amazon video app, I suspected he would like it. I was actually surprised at his delight while watching the show. Each vignette depicts Dirty and Stinky trying to solve a problem. I know my grandson cannot understand everything that's going on, but he does seem to enjoy the episodes. I don't think a 1.5 year old should watch a lot of TV but these are relatively short, they are colorful and provide action to stimulate the child's attention and they demonstrate how friendship and cooperation can result in solutions. We have now watched all the episodes and look forward to more in the future.
8 people found this helpful
Report abuse

KosetteReviewed in the United States on December 17, 2016
5.0 out of 5 starseven as good as this one is
Verified purchase
My five-year-old son absolutely loves this show. He constantly asks to watch it, even though he's been through the season several times. I've actually had to suggest that he choose another show for variety, even as good as this one is. The pace is gentle but engaging, and the songs are cute improvs that don't become annoying after a few listens. The animation is really adorable, and I find myself watching it with him. Even my husband, who is t big on kids in front of a TV, likes that our child is into a show that teaches innovation and reasoning in such a fun, creative way. This is a great kids show and I wish there were more seasons and episodes.
6 people found this helpful
Report abuse

BekahReviewed in the United States on March 29, 2017
5.0 out of 5 starsFun show with great values
Verified purchase
I am extraordinarily choosy about what my kids are allowed to watch. The Stinky and Dirty Show made the cut. We have watched all 10 episodes 3 times each, and I find myself referencing lessons learned from the show in our day to day life. My 2.5 year old has to work very hard to form words, and he only says a handful. Our speech therapist wants us emphasizing one syllable words that can be used in play. I love the way many of the sound effects in the show include words over top of sounds such as "screet," "vroom," and "beep." As an educator, I appreciate all the alliterations, extensive vocabulary, and descriptive language.

Anyone whose young child ever struggles with learning new skills is familiar with the big emotions than can come as a result of repeated failure. I love the fact that Stinky and Dirty NEVER get it perfectly the first time. They do such a great job modeling calm perseverance and problem solving.
8 people found this helpful
Report abuse
See all reviews
Back to top
Get to Know Us
Make Money with Us
Amazon Payment Products
Let Us Help You
EnglishChoose a language for shopping. United StatesChoose a country/region for shopping.
© 1996-2021, Amazon.com, Inc. or its affiliates