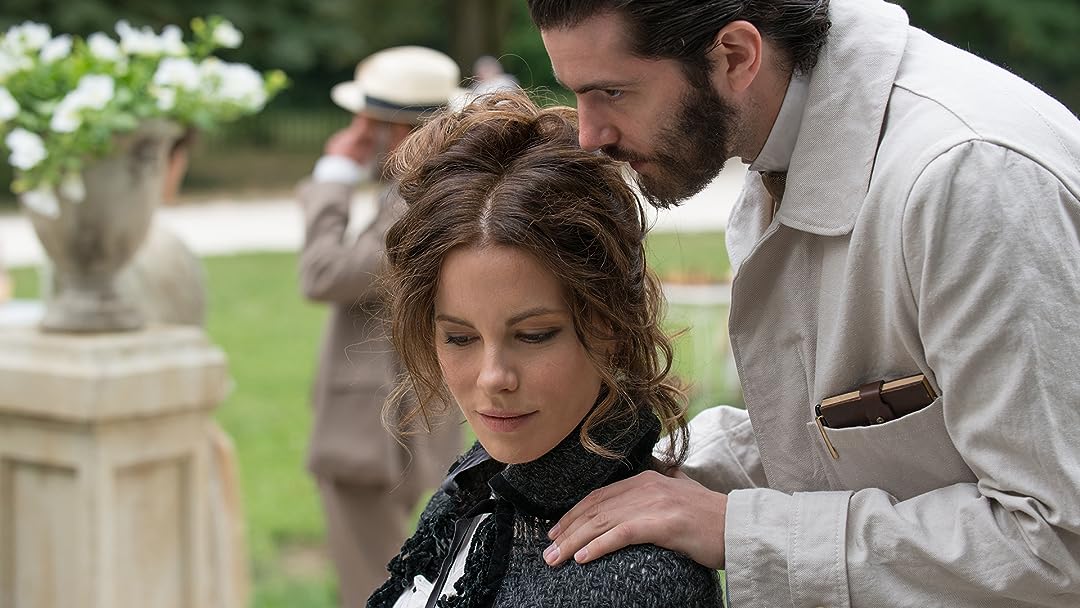 (960)
6.81 h 52 min2014X-RayPG-13
An Oxford grad (Jim Sturgess, "Across the Universe") accepts a job at a mental asylum and soon discovers that its "revolutionary" new treatments are inhumane and horrific. Co-starring Kate Beckinsale ("Underworld").

septimusReviewed in the United States on August 19, 2020
5.0 out of 5 stars
One of Beckinsale's best performance
Verified purchase
This is really an excellent film, almost like science fiction in the way it makes you question your perspectives. It has an all-star cast of British heavy-weights (mentioned by many reviewers but let's not forget Sinead Cusack), and is directed by Brad Anderson, a highly respected independent filmmaker. But the centerpiece is Kate Beckinsale, who as the conscience of the film has seldom been better (outside of Whit Stillman's work perhaps). Her loyalty is divided between the cruel mad men running the asylum and the cruel mad men who used to run the asylum. (A century from now, the verdict on our current psychiatric facilities may be just as harsh.) Her character is well educated but quite unbalanced, hyper-emotion, barely under control; it must have been a very difficult role to play. Becknsale absolutely threads the needle, makes Eliza Graves riveting, and takes the film where it needs to go. The actress is rumored to have a genius 140 IQ and won poetry prizes at Oxford. Sometimes when playing "ordinary" characters she comes off as trying too hard, but she truly excels at portraying extraordinary people.
11 people found this helpful

Missy MReviewed in the United States on December 26, 2017
5.0 out of 5 stars
Who's Really In Charge Here?
Verified purchase
You just don't know who you can trust! This was a great, sometimes disturbing story. The poor young doctor walks into sub-standard treatment of the mentally challenged with hopes of helping to bring healing to at least a few. Such a caring doctor, one would wonder "why here?" As the story develops, things become a little more revealing and you really start to wonder who's crazy and who isn't. The end tells it all.
23 people found this helpful

Mike GishReviewed in the United States on September 24, 2020
5.0 out of 5 stars
An Analogy For Life On Earth
Verified purchase
We live in a world that’s like an asylum for degenerates; degenerates at the top, in the middle, and at the bottom. What distinguishes those at the top from the others is their conscientiousness, intelligence, and willingness to do whatever is required to control all the others, which means being absolutely ruthless, while at the same time buying the others off with material gain using debt and credit to keep them owing you perpetually.

You maintain the facade that the others have a say about what happens to them, holding mock elections, but you maintain control of their puppet leaders, politicians, and high-profile, influential people. Those who won’t be bought off, you knock off: the Kennedy’s, Martin Luther King Jr, Malcolm X, John Lennon, Gandhi, etc.

It’s the perfect means of control, avarice vs fear.

Anthony L.Reviewed in the United States on December 13, 2014
5.0 out of 5 stars
Shutter Island: Origins
Verified purchase
When we first see Stonehearst Asylum it is shrouded in fog, and there is a raven croaking at the gate. A freaking RAVEN. That was the first sign to me, that this movie was not going to be your run-of-the-mill period chiller. And you know what? It delivers on every level. Start with a masterful cast playing vibrant, lurid characters, throw in a fast-paced, surprisingly fun script with enough twists to astound even the most astute viewer, and saturate it with some excellent atmosphere and mood, all shadows, secrets, and flickering candle lights!

Let's talk about the cast first, because what a cast it is. Jim Sturgess leads as Dr. Edward Newgate, who with his wimpy mustache and thick spectacles, seems the most unlikely-looking romantic lead in Hollywood. But its also a brilliant and stunning performance filled with surprising gravitas. Kate Beckinsale shocks everyone with a vulnerable and subtly beautiful performance as a 'chronic hysteric'. But it is Sir Ben Kingsley as Dr. Silas Lamb that electrifies the entire screen and steals all of the scenes. All of them. I haven't seen a good actor have this much fun since Coppola's Dracula. Sir Ben is an acting BEAST in this movie. David Thewlis, Michael Caine, and Brendan Gleeson - all some of the greatest actors all to step in front of a camera, have memorable side roles, all hiding dark secrets and captivating the audience.

The performances are so electrifying, so subtle, so powerful and of so high a calibre, they elevate what could have easily been overblown Gothic camp or a boring chiller, into a thrilling spectacle unlike anything we've seen in a while. There are no black-or-white heroes or villains; the doctors are sometimes cruel, the lunatics are angry but pathetic. This allows for some unexpected real drama and truly interesting characters.

Then there's the plot, which is apparently an elegant and terrifying confection of madness, secrets, and twists and turns on every front. The setting could not be more ripe for horror. I mean, a Victorian lunatic asylum perpetually shrouded in fog and thunder? With RAVENS croaking at the spiked iron gates? But thankfully, STONEHEARST ASYLUM eschews the jump scare for the subtle build-up of dread, and blood and gore for mind games, dark secrets, hidden passages, and classy tension. Until that is, the Asylum and everyone in it goes mad. There's something timelessly macabre about two hundred lunatics madly dancing round a bonfire, or dancing to classical music, some swaying, some twitching, some manic, some merely pathetic.

STONEHEARST ASYLUM ain't perfect. There's some irking plot holes, and everyone's motivation is a bit muddled. There's one character who can apparently survive having a half ton of coal dropped on his head... But this is a really top-notch psychological thriller, which doubles as a moving discourse on madness and sanity, and the cruel practices of Victorian medicine. Not for those who like their films light and snappy, cool and easy. But if you like horror, suspense, Gothic, Edgar Allen Poe, or just a good old-fashioned, scary psychological thriller, I can't recommend this movie ENOUGH.
Five utterly mad, completely bonkers, absolutely insane stars.

P.S. If this review was helpful to you, please give it a like. Cheers!
32 people found this helpful

James C SmithReviewed in the United States on August 30, 2020
4.0 out of 5 stars
Good, But Not Truly Great
Verified purchase
REVIEW FOR AMAZON PRIME VIDEO:

Unlike Brad Anderson's "Session 9", which is a horror masterpiece, this movie was merely good.

With this type of a movie, even the semi-savvy viewer knows it will end with a major twist or two. However, the twist was only very slight, and didn't rewrite everything one just watched for the previous 99%, ala M. Night Shamalamding-dong's poor scripts.

I'm on the fence about the heavy use of big-name actors. They were all excellent in their roles, but I find using skilled, "no-name" actors to give such movies a far greater sense of realism.

Overall, the film was entertaining.

3.5 STARS
One person found this helpful

London FogReviewed in the United States on November 26, 2014
5.0 out of 5 stars
Eerie Historical Thriller Worthy Of Poe
Verified purchase
Based very loosely on Edgar Allan Poe's short story, 'The System of Dr Tarr and Professor Fether', Stonehearst Asylum proved to this skeptical viewer its worth as a darkly humorous gem of cinema, replete with twists and turns that will certainly send shivers down the spine of the most seasoned of horror aficionados. Blood and gore need not apply here, however. The atmosphere which set the stage for the psychological mind-twists that occured throughout, along with a supremely proficient cast of actors who were nothing less than mesmerizing in their believability, are the ingredients that qualify this as the consummate gothic horror film - and whilst it deviated considerably from 'Tarr and Fether', was a fitting tribute to the author and his work.

Aside from providing a taste of the finest acting I have viewed in quite some time, the characters, even seemingly minor players, were every single one of them lively and bold. Extremely well scripted it may have been, but this was nothing if not a character driven story. In a nutshell, we are introduced to the mysterious Dr Newgate, who, shortly before Christmas 1899, makes an appearance at Stonehearst Asylum, whereupon it immediately becomes apparent something is amiss with the idiosyncratic doctors and patients alike, and that there is more to this unorthodox alienist who has turned up on their doorstep in search of hands on experience.

Newgate, we learn early on, seems overeager to pry and rather too interested in the stunning Eliza Graves, a seemingly normal patient with a flair for the piano. His curiosity takes him deeper into an abyss of literal and metaphorical nightmares (for if one follows very, very closely the threads of this movie, and knows precisely what to look for, woven into its fabric is a thought provoking commentary on post-modernistic ideologies), and as each new horror unfolds, yet another mystery is presented. Meanwhile, Newgate, with his nonconformist methods, is stirring the status quo at Stonehearst, and the two main plotlines come to a head with the asylum's New Years celebration, an elaborately rendered example of suspense that was the crowning jewel of the entire movie. That tension lasts quite literally until the very last minutes, when, just as it seems we have everything figured out, we learn absolutely nothing is at it first appeared.

If I have not made mention of this, the actors exuded authenticity, while the lush period costumes were to die for. Jim Sturgess (Dr Newgate) in particular was just incredible; he can give you goosebumps with a whisper. And that he did, on too many occasions to count. With a premise so utterly original on all accounts, I cannot lavish enough praise on this movie, which I believe Poe himself would have been proud of.
70 people found this helpful

T.D.Reviewed in the United States on August 30, 2020
5.0 out of 5 stars
Great movie, great play!
Verified purchase
It is indeed suspense, but I hardly find it "horror" movie. For some people this is a reality.
Since the psychiatry declared, that "all insane claim that they are sane", there is no way for a sane person to prove their sanity and insanity goes on in the world...
Edgar Poe painted a really disturbing picture of what people are!
It could be in the family setting, or city, or country, or the whole world.
And the only one, who thinks they are insane... are those, who are sane...
At the end it is too late to realize, that white IS black and black IS white...

TimReviewed in the United States on August 5, 2020
1.0 out of 5 stars
Couldn't get through the first 20 min of it
Verified purchase
There is so much cringe in the first 20 minutes of the movie that I had to turn it off. It's not the patients, mind you. It is the main character's interactions with everyone else. He is just an arrogant horndog who is fancying himself over a married mental asylum patient.... as a doctor. There is a lot, and I mean a lot of over-the-top forced tension and cringe that I just couldn't sit through this.
3 people found this helpful
See all reviews
Back to top
Get to Know Us
Make Money with Us
Amazon Payment Products
Let Us Help You
EnglishChoose a language for shopping. United StatesChoose a country/region for shopping.
© 1996-2021, Amazon.com, Inc. or its affiliates