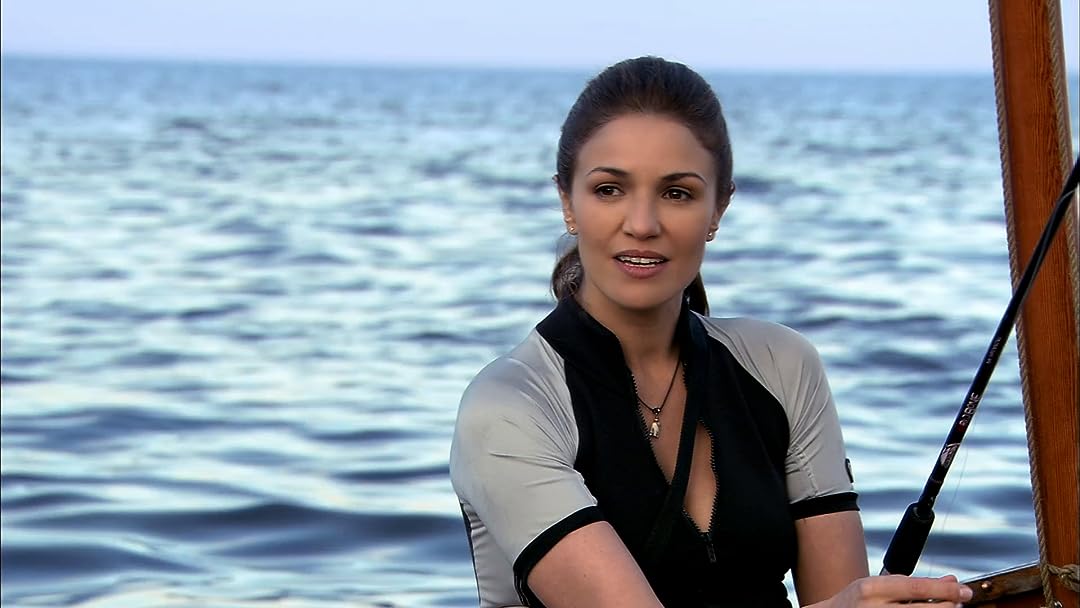 electroaddictReviewed in the United States on August 26, 2018
3.0 out of 5 stars
Lady MacGyver VS The Swamprats
Verified purchase
A couple of city folks go on a romantic fishing trip (in a dingy old swamp). They get lost and wind up on the property of three backwoods maniacs. The couple is quickly taken captive, and threats of rape and violence follow. It's a typical horror movie set-up. The male protagonist is completely inept, but fortunately the female is relatively heroic (otherwise there would be no story). There's a tiny bit of nudity, but an ample amount of gore. The villains are extremely dimwitted and borderline annoying. 50% of their dialog is repeating the names "Poppy" and "Honkey" over and over again. Definitely not a must-see film, but fans of movies like Wrong Turn, Texas Chainsaw Massacre and The Hills Have Eyes may find some enjoyment here.
3 people found this helpful

Green Beret FamilyReviewed in the United States on February 22, 2022
5.0 out of 5 stars
For movie lovers of rare horror classics
Verified purchase
This is the type of film for movie lovers who hunt for horror classics of rarities! It's entertaining, silly, bloody, but very fascinating on great entertainment of acting and gore. Not for children. But do add on the watch list. Starts off slow ends up a feast of a time👍
One person found this helpful

D. WilsonReviewed in the United States on March 3, 2008
4.0 out of 5 stars
Mild exploitation film or agressive Women's liberation picture? You decide!
Verified purchase
Storm Warning has allot going against it before you even put it in the DVD player. First off, it's directed by the man that brought us Urban Legend and Valentine, both forgettable horror dreck to be sure. Next, it was released under Dimension Extreme, the new DVD line that features horror movies deemed too... well, "extreme" for their regular label catalog and has(at least so far) been underwhelming to say the least(although with upcoming releases of Inside and Automaton Tranfusion, things are looking up). Lastly, it features an uninspired title and generic cover that thankfully aren't signs of the quality of the actual film within. The movie itself takes the oft-used(and yet always solid) formula of pitting good civilized people against a group of filthy backwood folk. With the premise set, the question is posed, "just how far will they go to survive?" There really isn't much more to go into as far as the plot is concerned, the movie is incredibly tight and moves along nicely without any drags(a perfect 82 minute runtime). Now what really sets this film apart from most of the other similiarly plotted direct-to-DVD releases(including Dimension Extremes first title Broken) is just how well the movie is put together. This film doesn't feel like a low budget B movie(don't worry though, it is!) with it's surprisingly excellent direction(including some incredibly striking location shots) and musical score. Likewise the entire cast shows up and delivers nicely, especially for this type of picture. No doubt a very polished film, but let's be realistic here... the real star of the film is the gore! It's a case of quality over quantity with only a few deaths delivered on screen, but boy are they gruesome and leave very little to the imagination(including a head bashing via hammer that was down right awe-inspiring!). Who knew the director had this in him!? If he had filled his previous efforts with this type of material he would probably already be a hero amongst the horror community... better late than never I suppose. There is one major flaw that kept this from being an instant classic though(for me at least), and that's the inability to ever deliver any real scares or even a sense of dread throughout. It just feels like the protagonists are going to get the upper hand on their captors from the very start. That probably isn't entirely the movies fault(when you've watched the same plot as many times as I have...), yet the vitims here are rather tamely exploited at best(the guy is insulted for driving a Volvo and gets his knee busted, while the female is forced to kill a baby kangaroo and show her bare butt?) so the threat of their safety never seems that high. The really great revenge films(i.e. Last House On The Left, I Spit On Your Grave, Mother's Day) have always provided a much more sinister give and take between victim and perpetrator before the tables are eventually turned. Still though, an entertaining time that's worth a watch for the finale alone(that delivers the gruesome goods). As an added bonus, if you detest men for any reason at all, you'll be happy to find that all of them here are either spineless worms or complete unmoralistic savages... women on the other hand, are smart, crafty, sexy heroes(sounds about right I guess)!
5 people found this helpful

Adriana NoirReviewed in the United States on February 19, 2013
5.0 out of 5 stars
Excellent movie!
Verified purchase
As warped as this family was, in some ways, you can't help but feel sorry for these brothers. They were definitely a product of their very unfortunate upbringing. The plot was extremely tense and once the couple ends up at the farm house, things move along at a fast and furious pace. You barely have time to catch your breath, and I was squirming in my seat several times with a mixture of anxiety and fear. I wasn't impressed with Robert's character or his portrayal, but it was really refreshing to see such a strong and capable female lead in a horror movie--and David Lyons gave an absolutely stunning performance as the deranged Jimmy. Even the dog was chilling in this movie. Definitely worth watching!
3 people found this helpful

The Straw ManReviewed in the United States on December 2, 2010
3.0 out of 5 stars
Always check the forecast before you go boating.
Verified purchase
I was seduced to watch this movie by two factors. The first was the premise of an edgy revenge flick. The second was some of the critical acclaim here in the Amazon forum. I was able to get my talons on this exploitation flick for a good price. However, after the movie was over I felt mildly let down. This movie was directed by Jamie Blanks, who directed the original "Urban Legend". I thought "Urban Legend" sucked, so in my very, very humble opinion promoting this movie with a conduit to "Urban Legend" did nothing for me. For what it is worth, this movie is leap and bounds better than "Urban Legend".

The premise of the film isn't very original at all, but that is okay. I didn't watch this film for the ground breaking story. Basically a couple rents a boat and ends up taking refugee on an island to avoid a very nasty storm. Once on the island they discover a house and a greenhouse that is growing some "wacky tobaccy", marijuana. The proprietors of this house are a father and his two sons. Needless to say this is an extremely twisted family and they end up torturing this couple. Then the couple must fight back.

My qualms with this movie is the pace, it is dreadfully slow. Going into this film I knew what to expect so the build up really didn't do much for me. I don't mind waiting for things to develop, but I felt the development was incredibly sluggish. As for the acting, it was pretty solid. The good guys were one dimensional but believable. The bad guys were disgusting and one dimensional. For this type of movie, I am totally fine with these types of characters.

The majority of the film the couple is locked up in a barn with myriad tools and what not at their disposal. This wouldn't have been a problem if they were tied up or if one of the villains stayed with them. However, leaving the couple alone with enough time to plan their revenge was lame. It was as cliché as when a villain tells the hero his/her master plan before he/she kills them, but forgets the knot on the rope isn't tight enough. As for how Nadia Farès' character became MacGyver is still a conundrum to me.

Notwithstanding, when the action happens it is gruesome and brutal. I did find this rather gratifying and I think any horror/gore junkie would agree. There is a scene with a kangaroo that is a bit amiss. However, with only five characters and the long-winded pace of the film the action and horror wasn't enough to make this a master piece.

I think that many horror fans should watch this movie, it has some great scenes and it is entertaining. However, for people who are new to this genre I would suggest some other films before seeing this one. "[[ASIN:B0002CHIJW I Spit On Your Grave (Millennium Edition)]]", "[[ASIN:B003ITIRF0 While She Was Out]]" and "[[ASIN:B001G9CNI6 Eden Lake]]" are an excellent place to start. Overall, I am sure I will give this movie a spin again, who knows maybe I will like it more the second time. I will have a blast making my girlfriend watching this.

JensdenReviewed in the United States on February 27, 2013
5.0 out of 5 stars
So much better than you think!
Verified purchase
I must admit I didn't have high expectations for this movie but boy, was I wrong. Finally, a female lead who takes these backwoods rapist wannabees by their balls and shows them who the real victims are. The kills in this movie are so over the top & so extreme that you have to love em. The contraption she builds is so gruesome and terrorizing that I actually cheered for her! Hooray for a new breed of women in the horror genre!
4 people found this helpful

Daniel B. Biggie IIReviewed in the United States on August 10, 2021
1.0 out of 5 stars
Title Misleading
Verified purchase
Storms were only a part of the movie, not the main premise of it.

charles crankReviewed in the United States on March 18, 2022
4.0 out of 5 stars
Good
Verified purchase
Watch
See all reviews
Back to top
Get to Know Us
Make Money with Us
Amazon Payment Products
Let Us Help You
EnglishChoose a language for shopping. United StatesChoose a country/region for shopping.
© 1996-2022, Amazon.com, Inc. or its affiliates