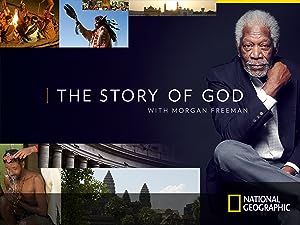 The Story of God with Morgan Freeman

(262)
7.92017TV-14
Story of God with Morgan Freeman continues with brand new episodes exploring and celebrating faith all over the world.

D. NykielReviewed in the United States on January 12, 2018
4.0 out of 5 stars
Recommended
Verified purchase
The National Geographic series, “The Story of God,” hosted by the famous actor Morgan Freeman, is a whirlwind tour of various aspects of the world’s religions. Episode 1 follows the life of a soon-to-be-initiated Tibetan Buddhist lama. Episode 2 follows the life of a brave South Korean Christian missionary who went through hell (so to speak) in his attempt to bring the Gospel to that very isolated country. Episode 3 explores the lives and work of various prophets and other religious leaders, past and present and tackles the question of the religious concept of “chosenness.” Episode 4 tackles the question of the afterlife. Episode 5 discusses how various religions attempt to prove the existence of God.
I must say that while I am no fan of---and, indeed, am extremely suspicious of the real motives behind---a lot of Christian missionary work, I actually admire this particular man. Unlike other missionary groups who, ever since Europeans began to colonize various parts of the world, have used Christianity in order to justify imposing not just their religion, but their entire culture, on a particular group of people, this man’s attempts to Christianize North Korea is an extremely brave move. I also enjoyed that little section on the “Taziya” (the passion play in which Shi’ite Muslims commemorating the Battle of Karbala, which took place in 682 CE between the Sunni forces of the caliph Mu’awiya ibn Abu Sufyan ibn Harb (the founder of the Umayyad Dynasty), and the Shi’ite forces led by Husain ibn Ali, the grandson of the prophet Muhammad and Husain’s subsequent martyrdom), which is commemorated on the Islamic holiday of Ashura (the tenth day of the Islamic month of Muharram). I particularly enjoyed that segment about the Pentecostal service. I am not a Christian, but it was very moving and inspiring nonetheless. Counter to Morgan Freeman’s claims, the Hindu concept of “Moksha” is NOT “a version of Heaven.” While some Hindus do believe in Heaven, the concept of “Moksha” refers to liberation from what is known as “Samsara” (reincarnation). Furthermore, while I, as a spiritual person, refuse to deny the claims of those who have near-death experiences, I am nonetheless very skeptical of them because I suspect that the same thing that happens in our brains when we dream is exactly what happens when people have near-death experiences. At the same time, as a person of faith, I refuse to deny that it was a supernatural experience. It very well may be that their God is trying to tell them something. You never know. Of all of the episodes, I would have to say that my favorite segments were the ones about the Shi’ite Islamic ritual of the Taziya (since I have a Bachelor’s Degree in Islamic World Studies), and the segment on the Sikh religion (since I have relatives who are Sikhs). While I am a deeply spiritual person and will never question whether or not there is a higher power, I am simultaneously fascinated by, and extremely skeptical of, any attempt to either prove OR disprove the existence of a higher power because objectively, faith---or lack thereof---is, for all intents and purposes, a choice. On one level, I reject the notion promoted by many secularists that there supposedly is evidence to disprove the existence of either a higher power or an afterlife, but at the same time, I also am skeptical of the claims of those who claim to be able to prove the existence of God because, regardless of whether one believes in God or not, one’s belief in God (or lack thereof) forever will remain, I suspect, a choice.
All in all, I would highly recommend this documentary series to anyone interested in world religion.

Gabriela MistralReviewed in the United States on January 31, 2018
4.0 out of 5 stars
I love Morgan Freeman
Verified purchase
I love Morgan Freeman, one of my favorite actors. However this "documentary" should not be call The Story of God the way it is going. It should be called the story or religions. Yes, it is about god, in a sense,but for the most part it is about the way different people practice different religions to relate to god. I have only watched the first season and it was very tiresome in my eyes. It moves so incredibly quickly. I supposed who ever is doing/making it wants to cover as much material as they can, but to me it is not about god, it is about religion and it moves too fast.
2 people found this helpful

Amazon CustomerReviewed in the United States on May 17, 2017
5.0 out of 5 stars
Five Stars
Verified purchase
Always like anything that Morgan Freeman is in.
2 people found this helpful

Liza LemonReviewed in the United States on September 10, 2017
5.0 out of 5 stars
Mind expanding...
Verified purchase
These shows are just incredible. I watched the whole 1st season in one night, it's educational and mind expanding. Religion and spirituality are such important factors in our life- we spend our whole lives trying to answer a few questions and come to terms with death and the afterlife, yet pay such little attention to religion throughout our daily lives, at least in my country. These shows reminded me why it's important to keep your faith close to you even showing scientific evidence to support having a soul.. anyways, it's definitely worth the buy. One of the best mini series Ive ever seen.
2 people found this helpful

Chris S.Reviewed in the United States on January 20, 2019
4.0 out of 5 stars
Very well done series
Verified purchase
Not as good as season 1 but still extremely interesting. Definitely recommend if you’re open minded and curious about others belief systems

MichaelReviewed in the United States on August 8, 2020
3.0 out of 5 stars
Ok story
Verified purchase
Morgan freeman is always good. Not enough information on each area he touched on.
See all reviews
Back to top
Get to Know Us
Make Money with Us
Amazon Payment Products
Let Us Help You
EnglishChoose a language for shopping. United StatesChoose a country/region for shopping.
© 1996-2022, Amazon.com, Inc. or its affiliates