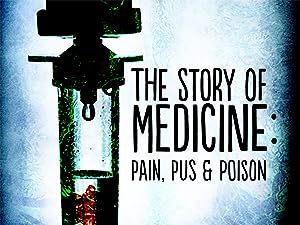 Season 1
(51)
8.520137+
In this "entertaining medical series" (The Sunday Times, U.K.), Dr. Michael Mosley shows how drugs have revolutionized medicine and changed the course of human history. Unfolding over a period of 200 years, it's an extraordinary tale of daring, self-experimentation, revelation, genius, and outright luck.

Included with CuriosityStream on Amazon for $2.99/month after trial

Watch with CuriosityStream
Start your 7-day free trial
Add to
Watchlist
By ordering or viewing, you agree to our Terms. Sold by Amazon.com Services LLC.
Write review

Clay GarnerReviewed in the United States on January 17, 2017
5.0 out of 5 stars
''All poison is medicine - All medicine is poison''
Verified purchase
Interesting and instructive. Includes personal stories and background that adds human interest. Travels to the locations where historical finds occurred. England, Germany, America, to the very houses or laboratories where discoveries were made. Makes story come alive.

Shows the operating theatre where ether first used. Developed by two dentists, who failed in the first attempt (one committed suicide). Interesting.

1) Pain - that is the development of pain treatment, starting with laudanum in the nineteenth century. Later refined into morphine. Explains that aspirin and heroin came from the same research.

2) Pus - penicillin mentioned by Fleming, but only really developed by British as treatment for soldiers during WW2. Thereafter, huge effort to find additional antibiotics. British companies decline to manufacture it. Scientists travel to Brooklyn and penicillin is mass produced just in time for invasion.

Also presents the difference of bacteria and virus. Shows how the recent understanding of human genome will enable individualized medicine.

This is not chemistry class, but closer to history of medicine.

Enjoyable and educational. Plan to watch with my grandson.

MemaReviewed in the United States on May 11, 2016
5.0 out of 5 stars
Educational and entertaining
Verified purchase
A very well constructed educational piece, or 3 pieces. There is enough humor to keep us entertained through all 3 chapters. I work in the industry, pharmaceuticals, this would make a nice addition to any training programs. I learned some nice historical accounts which could be used in my own department's training documentation. Thanks for deeper insight into the many "stumbles" which made medicine what it is today.
2 people found this helpful

LillybettinaReviewed in the United States on September 11, 2016
5.0 out of 5 stars
Loved it!!
Verified purchase
This is an awesome look at the history of medical science and its almost comical origin. Very informative but with a funny take on medicine, early surgery, anesthesia (where it medical science seems to have originated), and lots of interesting medical procedures which are, thankfully, no longer performed.
2 people found this helpful

JoyReviewed in the United States on October 13, 2016
4.0 out of 5 stars
Very Good Overview of Modern Medicine
Verified purchase
Intelligent and informative overview of the history of modern medicine. I especially enjoyed the narrative of the development of early twentieth century drugs which now have become a scourge on modern society, including heroin and the development of opiate drugs.
One person found this helpful

Wyatt and SabrenaReviewed in the United States on May 27, 2017
5.0 out of 5 stars
100% MUST SEE
Verified purchase
100% must see! Learned so much history and gives you a great outlook on what we have in store for our future with medicine and research. Great series! Wish I could find more great stuff to watch like this
2 people found this helpful

J. SingletaryReviewed in the United States on August 18, 2016
5.0 out of 5 stars
Interesting
Verified purchase
This is a truly interesting CD set. It is very honest - to a fault, some say, as it is graphic. I have learned a lot from it and shared it with family members. Informative, it is.
One person found this helpful

TobiGailReviewed in the United States on April 24, 2019
5.0 out of 5 stars
Ohhhh Gross!!!
Verified purchase
But such a fun, interesting, entertaining, and informative short series. Go for it!
See all reviews
Back to top
Get to Know Us
Make Money with Us
Amazon Payment Products
Let Us Help You
EnglishChoose a language for shopping. United StatesChoose a country/region for shopping.
© 1996-2022, Amazon.com, Inc. or its affiliates