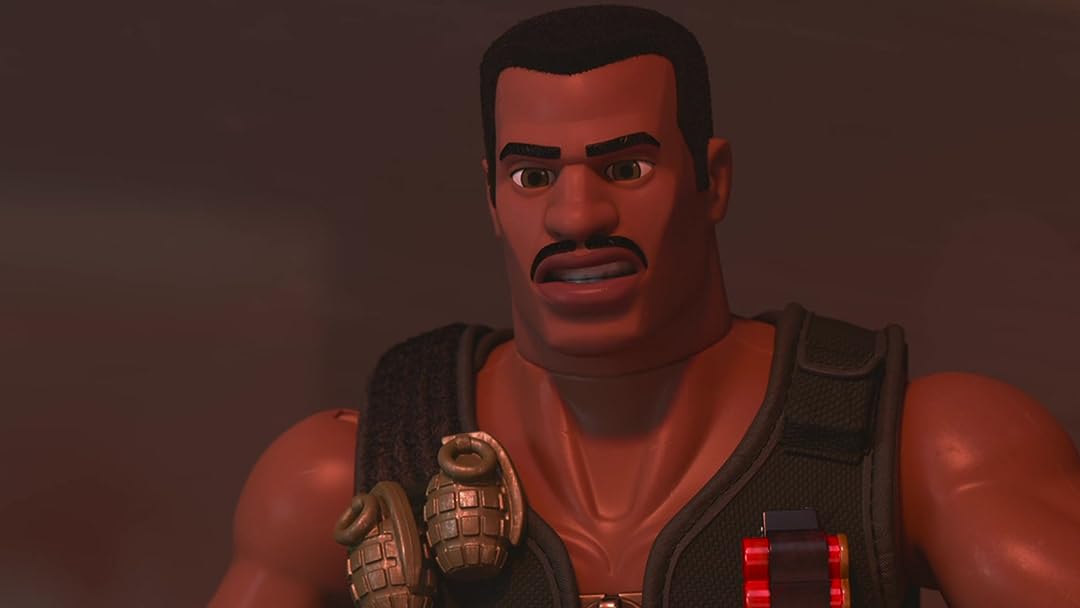 EmilyReviewed in the United States on October 13, 2018
5.0 out of 5 stars
Longer than I was expecting - good value!
Verified purchase
I had previously purchased Toy Story That Time Forgot and was disappointed, and I was afraid that this one would be the same - a 15 minute movie for the price of a full-length feature. But, I was pleasantly surprised! My three year old keeps asking to watch "the scary Toy Story" (we've probably watched it 10 times in 3 days). The "movie" is about 20 minutes long, but if you keep watching, there are other shorts after the "movie."

Also, the movie isn't too scary for little kids. There's a nod to Night of the Living Dead at the beginning - but still not too scary. I think the scariest part is when the unknown thing that's taking each of the toys finds Jessie hiding in the bathtub. That part made Grandma jump, haha!

Sugar4SpiceReviewed in the United States on January 21, 2019
1.0 out of 5 stars
Shorter than a TV show!
Verified purchase
This is 20 minutes or less, the rest is producer commentary. Not worth $12 and he length listed is misrepresented.
17 people found this helpful

Malarky51Reviewed in the United States on July 26, 2019
4.0 out of 5 stars
Great Short Film, not as good as Time Forgot
Verified purchase
This short film is set between Toy Story 3 and 4, and borrows some of the character development and themes of Toy Story 2. My 3 year old called it a "Scary Toy Story" but he was not at all nervous about it. The manequins in Toy Story 4 made him more nervous than this Hitchcock Psycho inspired short film.

It was entertaining, but a lot of the film was lost in the rushed format. After watching a few times, I began to notice that it inserted a lot of horror movie tropes and even some of the scene framing of some classic suspense movies like Psycho.

What redeems this disc is a series of three Toy Story toons, which are 5-11 minute shorts. The Partysaurus short became my 3 year-old's favorite, which included real, original electronica music and a bathtub "rave" that reminded me of the underground dance scene of the early 2000s.

I bought both Toy Story discs after seeing Toy Story 4 and think they were both worth it, though Toy Story That Time Forgot is better.

Kindle CustomerReviewed in the United States on November 13, 2020
1.0 out of 5 stars
DVD never worked - very disappointed
Verified purchase
This was purchased as a "potty prize" for a 3 yr old working on potty training. Sadly, the DVD was damaged and never worked properly. The DVD played for the first 20 minutes or so, much to our kiddo's delight, but then froze entirely and we couldn't get anything past that point to play or even any of the special features. The DVD itself seemed to have a visible defect on the disc, so that might have been the problem. VERY DISAPPOINTED and do not recommend that others purchase this item. Since it was a potty prize, we had to "save" it until our kiddo had "earned" it, which meant that it was outside of the very short return window with Amazon. Basically, wasted money since the disc doesn't work. And...a very very sad kiddo. :(
One person found this helpful

LisaMRReviewed in the United States on April 20, 2018
5.0 out of 5 stars
BUY IT!
Verified purchase
This DVD is absolutely great! Yes the main feature is only 25 minutes long, but the 3 cartoons that are about 10 minutes each make this whole DVD about an hour. Put it on FastPlay and you are set! Each segment is totally entertaining. The whole family loves it!
Definitely buy it if you are tired of watching the same three movies over and over and over again. Hurry up Toy Story 4!
9 people found this helpful

AnnaReviewed in the United States on August 24, 2020
5.0 out of 5 stars
Great episode, just watch which DVD zone you order
Verified purchase
This is a very fun DVD with a “scary” (but not really) Toy Story episode. The only thing I have to note is that I accidentally ordered the PAL DVD (meant for UK and Europe) instead of the NTSC DVD (meant for US) so it won’t play on the regular US zone 1 DVD players but it does work really well in a multi zone DVD player in the US or on a computer. Just be careful which version you order depending what zone you’re in, but definitely worth getting, it’s a great addition to the Toy Story collection!
One person found this helpful

luke's momReviewed in the United States on July 28, 2016
4.0 out of 5 stars
Cute pseudo scary movie for young kids
Verified purchase
My kids are big Toy Story fans so of course they were excited when we came across Toy Story of Terror. It is a pretty cute movie that is "scary" and entertaining enough to keep my 7 year old's interest but not too scary for my 3 year old to watch. This has several episodes and is shorter than a typical movie, my kids liked all of them and were entertained the whole time.
8 people found this helpful

Laura NovackReviewed in the United States on October 16, 2020
1.0 out of 5 stars
Waste of money. Do not purchase.
Verified purchase
This is 20 minutes, not Halloween related and a complete waste of $10 bucks. Don’t waste your money on this short and overrated short film. It’s not worth viewing even if it were free.

We love toy story 1,2,3 &4; but this hyped up short film is falsely advertised as being 1 hour 4 minutes long which is completely incorrect, and the 20 minute film is not a terror. Requested my money back and didn’t get a refund.
See all reviews
Back to top
Get to Know Us
Make Money with Us
Amazon Payment Products
Let Us Help You
EnglishChoose a language for shopping. United StatesChoose a country/region for shopping.
© 1996-2022, Amazon.com, Inc. or its affiliates