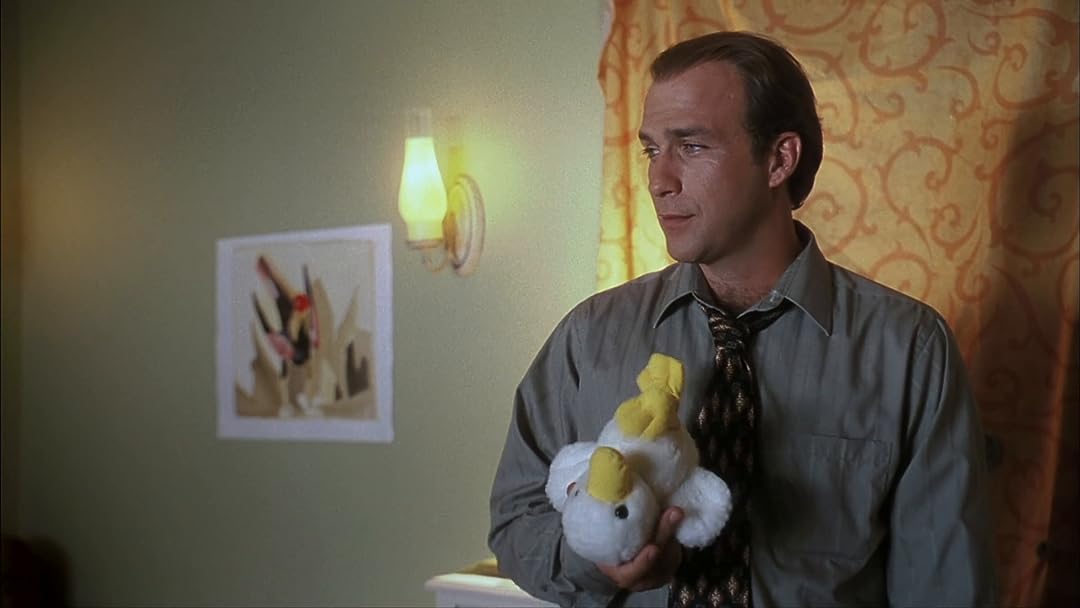 Kimberly Marie WashingtonReviewed in the United States on June 23, 2018
4.0 out of 5 stars
Satonicism taking to a new level
Verified purchase
The movie is really good if you are really into gothic and the sadistic portrayals of this life style and what truly lies behind the meaning of body art, piercings, kidnapping and body torturing. How much pain and disfiguration can you take or others take living in your world. It Is interesting, but a movie that I will never watch again or recommend to any, especially if you are not a part of that Satanism dark world because what he does to his body and those that he tricks into coming to his home and the things he does to them is truly torture, but seen as art to him. He truly wants to die, but at the hands of someone else.
5 people found this helpful

francotirador333Reviewed in the United States on February 1, 2021
5.0 out of 5 stars
cult classic
Verified purchase
this movie predicted internet preditors before they were a thing. thats as genuinely horror as it gets.

timeless movie, internet shots are dated but the ideology is impactful.

DirtyrandYReviewed in the United States on May 11, 2020
5.0 out of 5 stars
I still love it.
Verified purchase
Shot in lovely Colorado Springs,and some in Denver. A must see for any horror fan. Supposedly it was written to show a "parents worst nightmare" (according to dee snider) but i love it. If you're from springs or denver you'll get a kick out of seeing downtown and the old church club. Not to mention the awesome soundtrack,and not terrible plot.
4 people found this helpful

TonReviewed in the United States on August 26, 1999
4.0 out of 5 stars
Surprising film, made for all the right reasons!!
Verified purchase
Never haven I seen a film with so many inconsistencies, illogical and all too coincidental things happening and 'borrowed' scenes that I enjoyed SO ENORMOUSLY!! I bought it not knowing who Dee Snider was, which is a good thing, because I am not much of a hardrock fan --I probably would have missed out on it if I had known he was Twisted Sister's lead singer. I understand it is Mr. Snider's first filmscrip and first major starring role. The things mentioned in the first line of this review may come from the fact that it is his first script, but as an actor, displaying two totally different sides of the Bad Guy, he is wonderfully brilliant, and he adds a third dimension to what might easily have been a flat comic book character if handled differently.
The story and script obviously do NOT come from a twisted mind (as is too easy to say for those who don't like the film) but from the concerns of a father who sees terrifying things happening in the world around him. The film moved me enormously and made an enormous impact, in spite of the things I mentioned earlier. Or could it even be (partly) because of them....... The society today is full of illogical things happening, weird justice and the truth is so often a lot more rediculous than fiction, so in a way what could be seen as flaws could also be seen as wonderful metaphors (although i doubt this was the original idea).
After the film had ended I did what I NEVER did before: i IMMEDIATELY watched it again, now with Mr. Sniders commentary on. And much to my surprise this was so ABSOLUTELY WONDERFUL!! Contrary to earlier reviews, I think Dee adds a lot of extra info and unfolds himself as a very intelligent guy widening his talents into other fields, being able to tell about it with enthousiasm (and a lot of humor I may add) and making me even more positive about the film than I already was. Also, he seems to be very pleased with himself, and that only adds to the fun!! The Rock Videos from the soundtrack album that are added as extras are not much to my taste, but the introductions by Dee Snider are so enjoying I actually had a lot of fun watching them (and carefully changed my mind, no matter how slightly, about this music genre).
Watch it, watch it again and then watch it with the commentary on. And try to keep an open mind. Too many four or five star hollywood films of directors and writers and stars that have 'made it' are full of rediculous flaws and illogicalities as well, but for some unknown reason they are accepted by critics and public alike. Strangeland has the added bonus of the fact that it comes from the heart and is made for all the right reasons instead of being taylored to as large an audience as possible.
I can hardly wait for Dee Snider's next work..

Daniel A. FosterReviewed in the United States on August 21, 2009
5.0 out of 5 stars
Dee Snider's Right On The Money!!!
Verified purchase
Kevin Gage (LAID TO REST), Robert Englund (A NIGHTMARE ON ELM STREET), Dee Snider (WEIRD SISTER), Linda Cardellini (BROKEBACK MOUNTAIN), Brett Harrelson (FROM DUSK TILL DAWN 2: TEXAS BLOOD MONEY) and Elizabeth Pena (JACOB'S LADDER) star in Dee Snider and John Pieplow's feature film; STRANGELAND. This film has torture, titties, pedophiles, hot girls and of course; Dee Snider & Robert Englund. Kevin Gage plays a detective looking for his daughter; Genevieve, played by Linda Cardellini. It turns out, Genevieve was kidnapped by a pedophile known as Captain Howdy, played by Dee Snider. After Howdy caught and arrested by Detective Gage, Howdy gets sent to prison and an asylum for 5 years. After his release, the town believes he is still evil at heart. Instead of Detective Gage trying to kill him, Jackson Roth (played by Robert Englund) tries to kill Captain Howdy. Dee Snider even inherited Freddy Krueger lines from Robert Englund in this movie. I give this movie a 5 out of 5 star rating.
6 people found this helpful

Ashley AnnReviewed in the United States on January 3, 2022
5.0 out of 5 stars
A must to have!
Verified purchase
The first time I watch this movie I had no idea that Dee Snider was the main caretaker. This is a great movie and so happy I found me a copy of it. There was talk about a second movie. But that was canceled. Horror movie definitely!!
One person found this helpful

VengeanceReviewed in the United States on November 20, 2017
5.0 out of 5 stars
Scary!
Verified purchase
I remember this movie years ago and I'm a big fan of Dee Snider. Love the band twisted sister. If you like scary movies this is one to get. A man misunderstood who turns violent because of the way people treat him. I recommend this product and seller to everyone. It came quickly and was packed very well and as advertised. Thanks so much!
4 people found this helpful

JenReviewed in the United States on October 6, 2020
1.0 out of 5 stars
No CC option.
Verified purchase
My low review is not for the movie itself, but for the fact that the box states it has CC. The movie has no CC so my son is not able to watch the movie with us as a family!
One person found this helpful
See all reviews
Back to top
Get to Know Us
Make Money with Us
Amazon Payment Products
Let Us Help You
EnglishChoose a language for shopping. United StatesChoose a country/region for shopping.
© 1996-2022, Amazon.com, Inc. or its affiliates