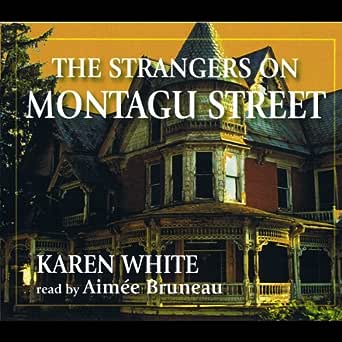 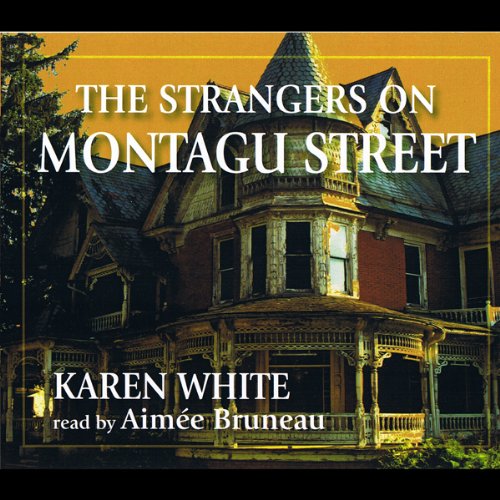 The Strangers On Montagu Street

4.6 out of 5 stars
4.6 out of 5
460 customer ratings
How does Amazon calculate star ratings?
Amazon calculates a product’s star ratings based on a machine learned model instead of a raw data average. The model takes into account factors including the age of a rating, whether the ratings are from verified purchasers, and factors that establish reviewer trustworthiness.
Top Reviews

Constance M.
1.0 out of 5 stars Such a dissappointment
Reviewed in the United States on June 12, 2017
Verified Purchase
Really? I am appalled at the ending...I have loved all the Karen White books I have read. Was excited about this one, but the setting could not make up for the shallow characters. I felt I was robbed after sticking it out and reading the entire , poorly written book ...only to get cheated at the end. Not even a clue as to where I can find the ending....next book...future book? Without an ending, I wish I would never have read it. If this story is continued in another book, I won't buy it as the main character is so unbelievable. There are several Karen White books that I have not read, but I won't take a chance on another. This writer went from the top of my list to the very bottom in one book.
Read more
11 people found this helpful
Helpful
Comment Report abuse

Lynda Moreau
3.0 out of 5 stars I wanted to love these books, but my dislike for the main character keeps getting in the way.
Reviewed in the United States on September 29, 2016
Verified Purchase
I wanted to love these books.....I really did. This is the third one I've read in the series, and I have ordered the next one - but it may be my last. The premise of the series is great for Southern fans of the paranormal - a psychic realtor who specialized in historic homes and "sees dead people." However, I just don't like the main character. I thought she would "grow on me" - but she hasn't. She comes across as a whiny, ungrateful, selfish and even MEAN woman. I realize that some may say it's due to her upbringing, but she has experienced little "growth" in the past three books. She rejects her gift, even though she should be learning to embrace and accept it. In this book, when she seeing the spirit of a woman with a baby come toward her with a pleading look in her eye, she turns her head and starts walking away quickly, humming a stupid ABBA tune. Meh. Come on, Karen, make us root for this woman a little bit. Frankly, I'm beginning to not care whether she is ever happy or not.
Read more
16 people found this helpful
Helpful
Comment Report abuse

FM
4.0 out of 5 stars Enjoyable read
Reviewed in the United States on January 14, 2017
Verified Purchase
I read books 1 and 2 and enjoyed them enough that I bought book 3 quickly thereafter. "Mellie" the realtor who can see and hear ghosts and her mother who has similar gifts in the gracious south...It has a good mix of paranormal, romance, investigatory action that hit the right notes for an easy holiday read. If it wasn't for the fact that the publisher has priced the 4th book a trifle high for my principles (12.99 for the kindle edition), I would have bought book 4 already. For those of you who want to try this series, I would say it's more enjoyable if read in order, but the books can be enjoyed as standalone novels.
Read more
10 people found this helpful
Helpful
Comment Report abuse

cheryl c malandrinos
5.0 out of 5 stars Engrossing & Fascinating ... Stayed Up Late to Finish It
Reviewed in the United States on June 8, 2020
Verified Purchase
The Strangers on Montague Street finds Melanie Middleton continuing to pour money into her historic home on Tradd Street when Jack Treholm appears on her doorstep with his estranged daughter in tow.

Nola has given the ever chipper and stunningly handsome Jack a real run for his money. He begs Mellie to take her for a bit, and who can resist Jack's charm? Other than Nola, of course.

In an effort to bring them closer together, Jack's mother buys Nola an antique dollhouse. It seems like a great idea to draw the young girl into the family she's never known. But, as night falls, unnerving shadows are cast within its miniature rooms and daylight finds things--including the dollhouse family--in different places from where they are left. Melanie soon realizes a new family has moved in with its own secrets and personal demons, and their past is drawing Nola into their own inescapable darkness.

Wow! I didn't realize how much I missed this series until I sat up reading into the wee hours of the morning. The developing relationships between all the characters is just one fabulous aspect of an engrossing story the reader can't put down. Melanie's parents seem to be rekindling their romance, while Melanie and Jack are growing apart. Melanie's best friend Sophie disappoints her. Melanie's mother wants her to embrace her gift, while she is just wishing it all goes away. After the loss of her mother, the only parent she ever knew, Nola is rebuffing attempts to be drawn into Jack's family and circle of friends. Jack is being ignored by his publisher, which makes him unsure of himself--a feeling very foreign to the over-confident charmer.

Then you have this captivating story of the antique dollhouse and its connection to Charleston. As Melanie's maternal instincts toward Nola kick in, she's determined to uncover the history of the house and its occupants in order to keep her safe.

Karen White is a masterful storyteller who draws you in from the opening line. She weaves a fascinating tale steeped in family secrets and complex relationships taking place in one of the most historical areas of the south. I might have to change my planned reading schedule to grab the next book in this series, Return to Tradd Street.

Kindle Customer
5.0 out of 5 stars Living this series
Reviewed in the United States on August 5, 2020
Verified Purchase
The test of a really good story was passed with flying colors once again. Thank you Karen White.

We have an intriguing story, wonderful characters you would root for no matter what happens, malevolent spirits, and a mystery you'll want to help them solve. Loved it.

Mellie and Jack just can't seem to get to together, someone or something always gets in the way. This time they try to help his 13 year old daughter whose mother has died. Mellie discovers her maternal side even in the face of Nola's teen angst and rebellion. All the while the spirit of Nola's mother helps to keep them both safe from two very angry spirits, one of whom could be a murderer. LOVED IT!
Read more
Helpful
Comment Report abuse
See all reviews from the United States

lianne coates
4.0 out of 5 stars a good read from a series that makes me smile
Reviewed in the United Kingdom on April 19, 2015
Verified Purchase
love the ghost whisperer element to these books. the protagonist is a little annoying letting everyone right down to her dog tell her what to do. that being said she doesn't annoy me enough to not read the series. the formula of the books is becoming a little samey and I hope the author recognises this and tweaks it.
positives of the book as the growing relationships between the characters and you are genuinely pleased that everyone is coming together to support each other.
Read more
Helpful
Sending feedback...
Thank you for your feedback.
Sorry, we failed to record your vote. Please try again
Report abuse

Peter Leigh
5.0 out of 5 stars Best of all three
Reviewed in the United Kingdom on July 14, 2013
Verified Purchase
I have now read all three of the Tradd Street books and this is definitely the best! I could not put it down. I now eagerly await book 4.
Read more
One person found this helpful
Helpful
Sending feedback...
Thank you for your feedback.
Sorry, we failed to record your vote. Please try again
Report abuse

ordinaryfolk
5.0 out of 5 stars Very good read
Reviewed in Canada on January 23, 2013
Verified Purchase
I have just found this author and really enjoy her novels. This is the third I have read of her works and have just ordered another two. This book contains a bit of mystery and romance. Be sure to purchase the sequel " the girl on Legare Street" as I was quite disappointed this novel ends with "to be continued"....rats! I didn't want it to end. Enjoy!
Read more
Helpful
Sending feedback...
Thank you for your feedback.
Sorry, we failed to record your vote. Please try again
Report abuse

Angelo Innocente
2.0 out of 5 stars This book read like a harlequin novel
Reviewed in Canada on October 22, 2014
Verified Purchase
This book read like a harlequin novel. I was totally bored with this book and was disappointed as well. I don't think I'll buy another book by this author.
Read more
Helpful
Sending feedback...
Thank you for your feedback.
Sorry, we failed to record your vote. Please try again
Report abuse
Load more international reviews

Jane Mitchell
5.0 out of 5 stars Five Stars
Reviewed in Canada on October 13, 2017
Verified Purchase
Completes the series for me. Waiting for the next book!
Read more
Helpful
Sending feedback...
Thank you for your feedback.
Sorry, we failed to record your vote. Please try again
Report abuse