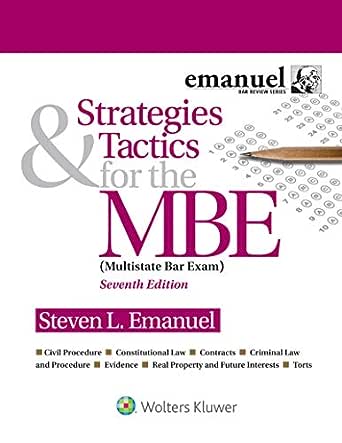 You've subscribed to Emanuel Bar Review Series! We will preorder your items within 24 hours of when they become available. When new books are released, we'll charge your default payment method for the lowest price available during the pre-order period.
Update your device or payment method, cancel individual pre-orders or your subscription at
Your Memberships & Subscriptions
There was an error. We were unable to process your subscription due to an error. Please refresh and try again. 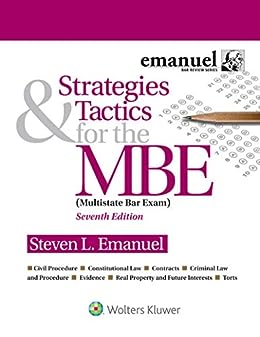 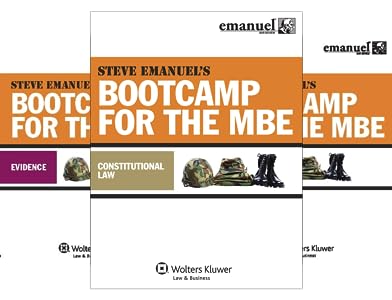 4.6 out of 5 stars
4.6 out of 5
25 customer ratings
How does Amazon calculate star ratings?
Amazon calculates a product’s star ratings based on a machine learned model instead of a raw data average. The model takes into account factors including the age of a rating, whether the ratings are from verified purchasers, and factors that establish reviewer trustworthiness.
Top Reviews

Farmer
4.0 out of 5 stars Emanuel! FINISH THEM!! YOU WIN!!!
Reviewed in the United States on January 29, 2020
Verified Purchase
I'm at the library preparing for the bar exam but decided to take a break to write this review. I'm only on the 2nd chapter and this book is by far better for me than the Critical Pass cards and the Barbri books. Critical Pass so far is just like Barbri's Conviser review but on flashcards: the sentence length and structure is a bit too long for a flashcard. My only wish for this Emanuel book is that it continued with the long-ish substantive law coverage of the remaining subjects . Emanuel clearly states that such coverage is for Consti and Civil only and the other areas will focus soley on exam tactics. He also states that his book is not intended to replace study of the substantive law. Instead, Emanuel refers you to his Law in a flash series but, at least from what I saw on Amazon, that series is a 2007 print. If they had 2019 and I had more time, and had known better, I would not have spent my time and money on Barbri or Critical Pass. They are not helping me the way Emanuel is; just my personal opinion. This author is keeping my interest and helping points stick thanks to his writing style and methods. The others put me to sleep! Oh, I would've loved to go to sleep to the Critical Pass' app but the audio isn't continous. One has to manually turn each page and then click on the audio button. It takes me a few clicks to activate the audio. To be fair to Barbri, however, I won't discount the role it played in terms of laying the foundation, which with any structure is a slow and arduous task.

I wish I had this Emanuel book sooner! Back to study! By the Power of Greyskull!

UPDATE 1. I wasn't happy that, at the start of the contract questions, the author disclosed, 'For ease of study, we've put all questions involving sales at the end of this section, beginning with question 45'. I initially felt it robbed me of the opportunity to effectivly learn how to decipher for myself which system of law applies from question 1 onwards. Nevertheless, the perceived advantage did not really materialize as I got only 14 of the first 25 questions correct. The answer explanations continue to impress me.

Amazon Customer
3.0 out of 5 stars very useful but many errors/typos
Reviewed in the United States on January 27, 2020
Verified Purchase
Too many errors. I’m studying for the BAR, not the LSAT or SAT. The test is made to trick you and doubt yourself, your study materials should do the opposite. This is unacceptable. It’s like they pieced together parts of real MBE questions to make their own so the answers don’t quite match up (ex: question talks about an agreement of $200 a month from Jan-May. The answer explanation states the agreement doesn’t raise a s/f problem bc $100 every month is not w/I s/f. Huh? The problem said $200 though which would’ve made the answer I chose correct.) It also gives you conflicting information on default rules for torts. Those are just the errors I remember. It’s a useful tool in your studies but you can’t 100% trust it.
Read more
5 people found this helpful
Helpful
Comment Report abuse

Reviewer 9
1.0 out of 5 stars Time waster
Reviewed in the United States on February 29, 2020
Verified Purchase
The 2016 version was a complete waste of time. Emanuel tried hard to cover topics on the MBE and to teach them through mock MBE problems. This does not work. You need to learn from actual MBE problems. I read the entire book and feel like I might have to take the Bar Exam again because I wasted so much time. Skip this time water and find actual MBE questions (with explaintions).
Read more
2 people found this helpful
Helpful
Comment Report abuse

Benjamin West
5.0 out of 5 stars Tips and tricks are essential
Reviewed in the United States on May 4, 2020
Verified Purchase
This product helped me pass the bar with flying colors.
Read more
3 people found this helpful
Helpful
Comment Report abuse

Zviad Kukava
5.0 out of 5 stars The best MBE material!
Reviewed in the United States on May 28, 2020
Verified Purchase
I found this book extremely useful. Being a foreign lawyer without getting US education, this book helps me to learn and understand American law.
Please, don’t make mess: I mean it helps as a supplemental material. I don’t suggest the book can replace substantive law materials.

Sean
5.0 out of 5 stars An Essential Book When Preparing for the MBE
Reviewed in the United States on December 19, 2019
I've taught the MBE for nearly a decade and throughout that time I've used the 5th and 6th editions of this excellent book. This is just an essential component of your preparation for the MBE. The new edition is the first to include released Civil Procedure questions that have shown up on a prior MBE and so even for students who have a previous edition, I'd recommend purchasing this one. If you're not taking a bar-review course you need this book, and if you are I highly recommend supplementing the questions provided by that course with the official MBE questions in this book.