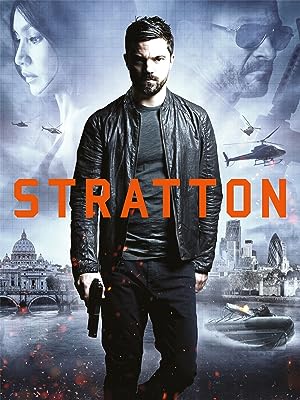 Stefan TeodorescuReviewed in the United States on August 14, 2020
5.0 out of 5 stars
Not a heavy movie but still fun to watch
Verified purchase
Just read some of the "more critical reviews"... Are you guys serious ? This is not real life, it is fiction. Not a serious flick, just something to fill your empty time with. And yes, this is not a major actor movie, it is a British take on the American "spread the virus - rid some bad guys" kinda stuff but still a good movie without the "political correctness" we see in the American movies today. Just because there is No Stallone, no Statham or Schwarzenegger in this movie, this does not mean that it is bad...
For those guys who criticize the Seal's snafu, clearly you never had a brother in arms... Get a life !!! It is a movie...
13 people found this helpful

IvritReviewed in the United States on September 4, 2018
2.0 out of 5 stars
What is it, a Pilot or Stand-alone Movie?
Verified purchase
This movie feels more like a pilot for a series than a stand-alone movie. If a pilot, 2.75 stars. A movie, 2 stars.

Pace was quick but the acting was uncompelling and there was nothing to draw the audience in to sympathize with any of the characters.

Two things happened that dropped any redemption this show had at keeping my interest: the British SOF soldier remarked that the new American SEAL turned down a promotion to stay in the field; that makes absolutely no sense given that the SEAL's current rank (Petty Officer 2nd Class) is equal to a Sergeant (E-5) in the Army or Marines. Then the SEAL put his entire team at risk by jumping out and firing his weapon at the enemy across the street. More incredulously, the British SOF soldier blew it off and minimized the SEAL's actions as nothing to be concerned about. At the point, the "movie/pilot" dropped from a 3 to a 2.5. And no, I would not recommend this movie to anyone.

will crowReviewed in the United States on August 22, 2021
2.0 out of 5 stars
what who?
Verified purchase
When does any SF group include a hot asian chick in some kind of squad tactical role? When have they ever put a girl in this kind of position? Silly banter, the casual attitudes and ''another day at the office'' type introduction is way off. And who would trust the other guys from not wanting to jump the hottie instead of following mission protocol? It's all off before it's on.
AND,,everyone is young-ish, good looking, there is ALWAYS an old codger who's lovable and understanding, there's an office building that's all glass and modern architecture, big screen TV's.
Oh, and if you're going to be in this tight knit SF unit, feeling sorry for yourself is a MUST.
3 people found this helpful

D. GlennReviewed in the United States on February 13, 2022
4.0 out of 5 stars
It's not as bad as some reviewer's remarks.
Verified purchase
I liked it. B grade level only in the sense the script bombed from the start.

It's obvious whomever wrote the script for the movie had never made it further than the borderto France. These limitations and more littered throughout the movie point out the missing experience and interaction with any military environment as badly as others here display. Here in the US, less than 5% of our population have ever served. That 5% includes all active, reserve, former marines and ex whomever along with any spouse and dependents.
2 people found this helpful

Russell SReviewed in the United States on April 14, 2018
3.0 out of 5 stars
Pretty Good
Verified purchase
When a high-stakes M16 mission to intercept deadly biochemical weapons goes spectacularly wrong, special operative Stratton must face the threat of a former Soviet operative who resurfaces after being presumed dead for two decades. It is believed that the rogue operative plans to take revenge on his former paymasters with stolen chemical weapons, and Stratton and his agents must race against time to stop the unimaginable from happening. Having given this description, it was an okay spy/action/thriller. Dominic Cooper was very good and so was tyler hoechlin, if even for a brief time. There was suspense and there was action and it was all very well done, I just saw that it lagged a few times. This is a movie I will recommend but no need to run out and watch it now.
7 people found this helpful

Adam SewellReviewed in the United States on December 18, 2019
2.0 out of 5 stars
B-movie acting is only the beginning...
Verified purchase
Decent enough story. Badly written script. Awful B-movie level acting. Anyone in the military will look at this and laugh. Terrible fights. Lousy action overall. Actors have look like a bunch of fresh faced soft millennial types with no killer instinct look about them who have never shot a weapon or been shot at in their lives. Sad, because the books are great and written by a guy who's been there and done that.
8 people found this helpful

Larry MoranReviewed in the United States on September 25, 2018
3.0 out of 5 stars
Worthy as a made for TV movie.
Verified purchase
I wish the whole movie was as interesting, as the first mission, the main character goes on. Slowly but surely, the film starts to turn into a made for TV action movie. The production company could have copied and pasted, the last twenty minutes of any other action film, into this movie. Then used CGI to put in their own actors. They could have saved themselves time and money. It might just be me, but Dominic Cooper, doesn’t seem like a good choice as the star in this project. It could just be, that no one in the cast, is required to do any real acting. Gemma Chan, was about as animated as she was in the TV series, where she played an android. Derek Jacobi, must just have been in the neighborhood, and the producers said something like, “Hey Mate, if you’re not busy. Want to be in a scene or two in our movie”? Of course, they probably just called his agent, to see if he had a little time to kill. Lastly, I would have much preferred the actor, that played the first American serviceman. To the one that played his former team member. I can’t say more, because of “spoilers”.
2 people found this helpful

JoeReviewed in the United States on January 14, 2021
1.0 out of 5 stars
Starts with bs
Verified purchase
The British SBS was the precursor to a precursor to the SEALS. By the movie maker's logic then Joshua was the basis for the SEALS. I have liked Connie since her role in "Soldier" with Kurt Russell. And she does a good job here. But the movie is still weak. The movie is a tad too melodramatic, a tad too arrogant, a tad too quaint and simple minded. Maybe it is suitable for bored British teenagers but I suspect they would not be satisfied with the story either. This movie has good actors. It is not their fault the movie was poorly written.
2 people found this helpful
See all reviews
Back to top
Get to Know Us
Make Money with Us
Amazon Payment Products
Let Us Help You
EnglishChoose a language for shopping. United StatesChoose a country/region for shopping.
© 1996-2022, Amazon.com, Inc. or its affiliates