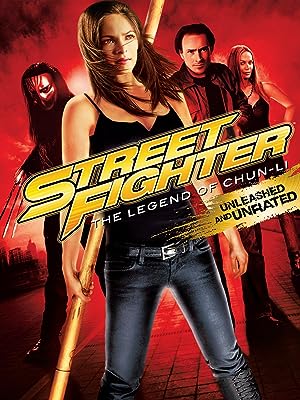 (807)
3.71 h 37 min2009PG-13
Brace yourself for more hard-hitting action and high-flying excitement in this special unrated cut of Street Fighter: The Legend of Chun-Li! Based on the wildly popular Street Fighter video game series, this powerful martial arts adventure explores the origins of the Street Fighter universe through Chun-Li (Kristen Kreuk), who avenges her father's death at the hands of Bison (Neil McDonough) and his evil Shadaloo Empire.

RBHCHOPPERReviewed in the United States on April 13, 2022
5.0 out of 5 stars
Kristen Kreuk and Moon Bloodgood so how can you go wrong.
Verified purchase
I love fight movies especially martial arts and love Kristen Kreuk. When the movie starter and I saw Moon Bloodgood it took me over the top as I love her as well. The movie was great. I bought it and will be watching it over and over. I have never been a Chris Klein fan but he was very good in this movie and not so annoyingly dorky as he was in the American Pie series ha ha.
One person found this helpful

Kevin TipaReviewed in the United States on December 3, 2009
3.0 out of 5 stars
Pretty terrible writing
Verified purchase
I can't speak to the additional disks, but I did see the blu ray unrated edition of the movie. The most important thing I can convey to you is that the writing for this movie is terrible. Absolutely terrible. Some movies pull off bad writing with a "cheese" factor where you can watch with friends and laugh at the goofy nature of the lines. But this movie seems to be trying really hard to be serious. So I guess the director of the movie thought they could manage to make the awful script work that way. I feel bad for the actors. They tried. And in some cases you can see how professional they were being, but the writing defeated them.

To further clarify my assertion of bad writing, the story introduces all sorts of potentially interesting tidbits that could be stories of their own, and then rushes through them. Predictably though, these tidbits end up being used later in the story without any real reason to use them. For example, Chun Li goes through intense training (meditation) in order to be able to gather chi/ki energy into a visible cloud that she can then throw at an opponent. They make a big deal about how she has to let go of her anger to accomplish it. And then in the big climactic fight, she's beating the tar out of the bad guy (Bison). Then comes a point where's staggered, and Chun Li's trainer yells out "you know what you have to do!" Of course she hits Bison with the chi/ki blast and he goes tumbling off a building. But this big special attack she spent so much time working on doesn't finish the job. Instead, she jumps off the building to use some other "Street Fighter" attack to snap Bison's neck. So that powerful chi blast thta you spent half the movie setting up was really pretty crappy?

Don't get me started on the lines. The worst lines come from the police officers that they focus on in parts of the movie. I'll leave it at that, and let you decide for yourself when you watch it.

Which implies I think you might want to watch it. I did give the movie 3 stars. There's some fun stuff to watch in there, and the special effects are decent. Also, Kristin Kreuk is beautiful... so I had to bump up the rating some for that.

Paul RiesebeckReviewed in the United States on October 25, 2010
4.0 out of 5 stars
Fun Movie At A Great Price
Verified purchase
I bought Street Fighter: The Legend of Chun-Li for a couple of reasons. First, I had only seen the last half of the movie on cable and wanted to see what I had missed. Second, I like Kristin Kreuk and enjoyed the part of the film that I had seen. Finally, when I saw that this was a three-disc set for a terrific price, I knew I had to get it.

The blu-ray doesn't disappoint. Like other reviewers have stated, the quality is excellent, crisp sharp transfer and astounding sound. The discs are loaded with extras and the behind the scenes footage is informative and entertaining. For die-hard fans there is even a full length animated movie (and believe me, the animation is very limited) that looks at the origins of Street Fighter. Personally, I skipped that disc after the first five minutes and stuck with the other extras and the film, which, incidentally, comes in both the theatrical version and the unrated version.

I know this movie for the most part was savaged by the critics, but watch it and enjoy it as a guilty pleasure.
You can see more of Kristin in this episode of Smallville at Amazon Unbox. [[ASIN:B001UGAU12 Bride [HD]]]
4 people found this helpful

BeastNYCReviewed in the United States on March 1, 2010
4.0 out of 5 stars
Kristin Kreuk + Moon Bloodgood !!!
Verified purchase
Streetfighter the Legend of Chun-Li was a decent effort. The people who say that it is bad should go and watch the Streetfighter with Jean Claude Van Damme!!!

The Blu-ray quality is excellent. I don't know how any straight man can say that this was a bad movie. HELLO!!! Kristin Kreuk + Moon Bloodgood !!! They are some nice eye candy!!

The fights scenes were alright. The first fight when Chun-Li's dad fights Bison's men was very cool. Also, the street fight in the alley when Chun-Li beat up the thugs.

BOTTOM LINE is that Kristin Kreuk worked extremely hard to train for this film !!! She did a ton of martial arts and gymnastics.

For the people who complain about Chris Klein ... guess what I'm going to tell you?

Don't pay attention to him and just look at Moon Bloodgood like I do!!!

I would recommend this film to Kristin Kreuk fans.
4 people found this helpful

Bernie GaydosikReviewed in the United States on October 17, 2022
1.0 out of 5 stars
DVD wont play in USA
Verified purchase
Please see my comments to email from y'all that told me Amazon had removed my review of another DVD because it was not validated by seller
" - Really...?
- We have 6 DVD players in our home.
- When this video and two others (Doctor Strange and Street Fighter - The Legend of Chun Li) we tried in each one - the screen showed this statement - 'The DVD is not authorized for use in this country/region' "

Savanna SmtihReviewed in the United States on June 17, 2020
1.0 out of 5 stars
This is a European movie that you need a European DVD player or multi language DVD player.
Verified purchase
Went to play the movie in my DVD/VCR play and it wouldn't play and said a code problem. Told the company this and they then told me they are a region 2 / b and can not do a refund if the item was open. They also said that this is in the comments section. Didn't see it when I looked at said area the first time. Think they should put it in the description or title factor of selling.
2 people found this helpful

MMReviewed in the United States on January 4, 2012
3.0 out of 5 stars
The DVD disc is NOT the same film as the BluRay!
Verified purchase
[The three stars is for the somewhat misleading listing.]

I just felt it was important to stress to potential purchasers that the DVD included in this 3-disc set is NOT the film that is on the Blu-ray. It is what they call a 'full-length animated origins comic-movie' called 'Street Fighter Round 1: Fight!'

So if you wanted a separate DVD of the film to watch when your BluRay player is otherwise occupied (or to watch in an SUV with a built-in DVD player), this is NOT the place where you would get it.
One person found this helpful
See all reviews
Back to top
Get to Know Us
Make Money with Us
Amazon Payment Products
Let Us Help You
EnglishChoose a language for shopping. United StatesChoose a country/region for shopping.
© 1996-2022, Amazon.com, Inc. or its affiliates