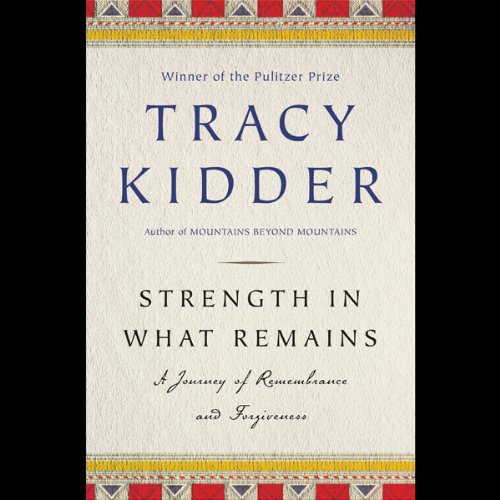 Strength in What Remains: A Journey of Remembrance and Forgetting

List Price: $27.95
You Save: $3.49 (12%)
By completing your purchase, you agree to Audible’s Conditions Of Use
Sold and delivered by Audible, an Amazon company
Share

4.4 out of 5 stars
4.4 out of 5
328 global ratings
How are ratings calculated?
To calculate the overall star rating and percentage breakdown by star, we don’t use a simple average. Instead, our system considers things like how recent a review is and if the reviewer bought the item on Amazon. It also analyzes reviews to verify trustworthiness.

Ilene A.
5.0 out of 5 stars A magnificent, indelible book
Reviewed in the United States on April 28, 2019
Verified Purchase
The beauty and power of this book is enormous; words cannot describe its stunning power, nor can I recommend it highly enough. One feels changed having read it. It is a true, harrowing story of one young man's against-all-odds escape and survival from unspeakable violence and atrocities. The book reads like a novel from which one cannot tear oneself away. It is chilling, yet uplifting. and reaffirms one's belief in generosity, kindness, and the resilience of the human spirit and heart. It is even more timely now than when it was written. A must-read.
Read more
4 people found this helpful
Helpful
Report abuse

Dottie Parish
4.0 out of 5 stars An Amazing and Distrubing Book
Reviewed in the United States on January 2, 2017
Verified Purchase
Strength in What Remains by Tracy Kidder

This is an amazing though disturbing book. It tells the true story of a medical student, Deo, who escaped from the devastating civil war and genocide in Burundi and came to the United States. The author details the traumas he encounters both in his home country and as an immigrant who doesn’t speak English. The story is told with a number of flashbacks and flash forwards which give almost agonizing detail about his trials and his pain through all this. Deo is amazingly persistent and determined to complete his medical training and to help his people heal. Deo should inspire all of us to overcome our troubles and pursue difficult goals in life.
Read more
12 people found this helpful
Helpful
Report abuse

Babs
5.0 out of 5 stars We don't know the depths of another's suffering or tenacity to overcome.
Reviewed in the United States on December 16, 2018
Verified Purchase
Although I've read a number of books regarding immigration, war, and tremendous obstacles various people have had to face before and after arriving to the US, this book really went into such detail that it was difficult to read at times. Deo's brutally honest story made me glimpse at the civil wars and genocides in Burundi and Rwanda, giving me some understanding of what happened, though I'm sure I can never truly understand fully. I will admit, I was completely ignorant about the issues in Burundi or that it also dealt with similar issues that Rwanda did. In the process of returning to Burundi and not only facing what had happened to Deogratis, but the tenacity to build his clinic to help his family and neighbors, and the healing that it gave him was very poignant, heartbreaking, yet promising. Thank you for bringing this memoir forward so that I could share in these experiences.
Read more
4 people found this helpful
Helpful
Report abuse

Anita C. Dudek
5.0 out of 5 stars A First Hand Account of Triumph Over Genocide
Reviewed in the United States on June 18, 2014
Verified Purchase
It is sobering to those of us in "the West" when we realize how little we actually know of the suffering so many thousands/millions are enduring in places of civil unrest all over the world. This book is told by another about Deaogratias a third year medical student who was of the Tutsi tribe in Burundi who managed to escape a massacre. The tale of his wandering 6 month journey through the forest hiding from everyone, not knowing who is friend or foe, eating roots and drinking unsafe water, then languishing in a refugee camp is riveting. He landed in NYC, and was helped by other African immigrants to get an under the table cash only subsistence job delivering groceries, to live as a squatter with them because it was "free" lodging, This brilliant man learned what American racial prejudice felt like, choosing to live in Central Park for 6 months until he was ultimately helped by a former nun who found him a family who invested in his education and helped him to ultimately thrive in the US, finishing medical school at Columbia University and Harvard then returning to Burundi to help his people recover and build themselves an d their communities back up. I think of him as the Mandela of Burundi. I highly recommend this book in both the audible and kindle formats. It is one that makes you think and tell other people about it.
Read more
10 people found this helpful
Helpful
Report abuse

Martha E. Pollack
3.0 out of 5 stars Powerful, but would have been better if Kidder hadn't inserted his own story
Reviewed in the United States on October 23, 2011
Verified Purchase
Burundi is one of the poorest countries in the world, but the misery suffered by its population goes well beyond profound poverty. As is well known, both Burundi and the neighboring country of Rwanda had gruesome civil wars in the late 1990s. Hundreds of thousands of people were killed in fighting between the two main ethnic groups in these countries, the Hutu and the Tutsi.

"Strength in What Remains" is the story of Deogratias--or "Deo"--a young Burundi medical student and a Tutsi. When the Burundi war breaks out in 1994, Deo escapes to New York with $200 in his pocket and finds work as a grocery store delivery clerk. Living on the street, he almost gives up in despair, but he befriends a politically active nun who finds him a home in Lower Manhattan with an older, childless couple, who later pay his way through Columbia. Deo subsequently finds work with the global health organization founded by Paul Farmer, the subject of one of Kidder's earlier books, "Mountains Beyond Mountains." With the experience he gains at PIH, Deo eventually returns to Burundi to build a health clinic there.

Tracy Kidder's true story of Deo's life has two parts. The first part tells Deo's story from the time he is a small child to the time he graduates from Columbia and starts to work at PIH. It's powerful, indeed frequently overwhelming. But the second half of the problem is problematic. Here Kidder describes the trip he took with Deo back to Burundi, to retrace the path Deo's took while escaping the violence and to make plans for the health clinic. Reading this section recalls watching a Michael Moore movie: you just wish that Moore would get back behind the camera and make his movie, without inserting himself into it, and the same seems true of Kidder. His reactions to the killing fields of Burundi aren't what should matter, and yet there he is telling you about his inability to feel the appropriate feelings.

There's also another problem with the second half of the book: sometimes it seems that Kidder has forgotten what he already wrote. For example, one of the most memorable moments in Deo's experience occurs when he's been on the run for weeks, and, exhausted, is about to give up just short of the Rwandan border. A Hutu woman sees him, coaxes to keep moving, and lies the border police saying that he is her son, in order to save him. Kidder tells this story in detail, in the first half of the book, writing: "'I'm too tired,' [Deo] told the woman. `I'm just going to stay here.' `No, no,' she said. `The border, it's nearby.'". In the second half, when they revisit the scene, Kidder describes a conversation he has with Deo: "'What was it you told her?' I asked over the noise of the plane. Gazing out, Deo replied `I'm too tired. I'm just going to stay here.' And she said `No, no. It's not too far to the border.'"

I happened to read this book shortly after reading Chimamanda Ngozi's "Half the Yellow Sun," a fictional account of a different African civil war: the Nigerian war that predated Burundi's by about 30 years. Both books pack an emotional wallop, but somehow Ngozi's fiction had an immediacy for me that Kidder was approaching in the first part of his book, but upset in the second.
Read more
12 people found this helpful
Helpful
Report abuse

Sylvia Cooke
5.0 out of 5 stars Incredible life
Reviewed in the United States on November 5, 2018
Verified Purchase
I loved this book. It is the true story of a young man from Burundi who physically survived the genocide in his country and surrounding countries. But the real story is the mental anguish he suffered and the mental and physical struggles he overcame to make a worthy life for himself and for his home country. Deo is a remarkable person. This is a book you can’t forget. I chose it because of the title...lines from a Wordsworth poem that is a favorite of mine. Deo is the epitome of that line.
Read more
Helpful
Report abuse
See all reviews

Gerrit Bilkes
5.0 out of 5 stars Book: Strength in what remains
Reviewed in Canada on December 2, 2020
Verified Purchase
I bought this book as a Christmas gift; the recipient having asked for it.
Read more
Report abuse

Noelle
4.0 out of 5 stars Four Stars
Reviewed in Canada on May 30, 2016
Verified Purchase
Great story of hardships and victories.
Read more
Report abuse
See all reviews
Back to top
Get to Know Us
Make Money with Us
Amazon Payment Products
Let Us Help You
EnglishChoose a language for shopping. United StatesChoose a country/region for shopping.
© 1996-2021, Amazon.com, Inc. or its affiliates