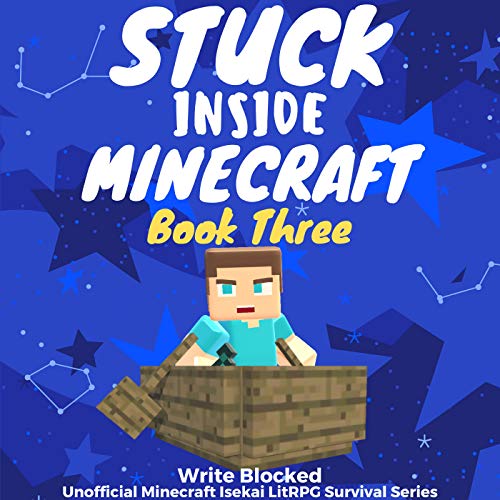 Michael continues to increase his Twitch popularity as he goes in and out of the world of Minecraft. He has been training hard since his last adventure, as he prepares for his final fight against Herobrine. That’s not the only thing he is preparing for, because Michael is also planning his revenge against Dionysus.

Who will win in the rematch you have all been waiting for? Dionysus or Michael? Who is Herobrine’s chosen one, so far only known as The Other? What monsters lie beneath the deadly waters that our heroes must brave through?

The answers to all your questions and more in:

Rage of the Sea: Stuck Inside Minecraft, Book 3

Disclaimer: This book is an unofficial Minecraft fanfiction. It is not endorsed, authorized, sponsored, licensed, or supported by Mojang AB, Microsoft Corp., or any other entity owning or controlling rights to the Minecraft name, trademarks, or copyrights.

Sarah in Boston
5.0 out of 5 stars lol
Reviewed in the United States 🇺🇸 on December 14, 2021
Verified Purchase
I though this was a good book. Why can’t Dionysus leave the dojo? Plz tell. Also I knew it was Liam
Read more
Helpful
Report abuse

ThisBliss
2.0 out of 5 stars pretty good
Reviewed in the United States 🇺🇸 on August 20, 2021
Verified Purchase
This is a pretty good book series. It has a good story but I do not like how it is written out. If the author went over it again he/she would probably find lots of grammatical errors. One I found especially annoying was that comas were frequently replaced by periods. I do like how the characters interact with one another . I also read the Mob Hunter series and like it too.
Read more
Helpful
Report abuse

Kevin
4.0 out of 5 stars good, needs improvement
Reviewed in the United States 🇺🇸 on July 22, 2020
This book was incredible and ended in a huge cliffhanger.
due to the fact that al of my questions have been answered I have no other questions for this book.
<ratings>
action 7/10 some short action scenes.
laughs 2/10 not many
speed 10/10 great!
emotion 3/10 can't give much here.
length 7/10 short
quality 7/10 work on that
overall 6/10 can't give five stars here :(.
<character>
name: Thorn
hair: silver
eyes green
race villager (male)
job warrior
preferrs bow
weapons: enchanted bow. power V, unbreaking III, infinity I.
iron sword. fire aspect I, unbreaking II, smite III.
armor: chain full set all enchanted with protection II, unbreaking II.
I'm sure not what else to do can you include a section on what a character idea needs to have in the next book?
(I'm gonna do a description)
sometimes a little impulsive, strong and good with bow. Thorn fights from the wall with his bow and sometimes sword. wears chain for it's lightness and mobility. Sometimes he does before he thinks resulting in a good or bad situation depending on what happening. Speaks as little as possible and keeps to himself usually.
<answers to his questions>
no i did not think liam was the other but i wanted him to get inside of the game.

I would choose to be a warrior.

can't remember the other two.

<ideas> warning spoiler content
hmmmm...
they bring emma back intoinecraft when their plan to make emma the other so they have a spy on the inside.

liam(the other) and michael get into a fight on the island and they are evenly matched but then jack blows him up. :) (love tnt).

P.P.P.S. I told you so.
Read more
Helpful
Report abuse

inbal Sivan
5.0 out of 5 stars Stuck Inside Minecraft Review 3
Reviewed in the United States 🇺🇸 on May 13, 2021
(Warning: This review contains spoilers.) Okay, There's no dought about it. This book is crazy awesome. I loved the giant squids and the island where hundreds of mobs spawned. That is minecraftally impossible, unless you used spawn eggs. But if you did that, your game would have serious lag. So if too many mobs spawned in one place your game would lag. This is a LITrpg adventure, there should have been lag in the book. And that's what I like about it-I WILL DESTROY THIS WORLD AND YOU ALONG WITH IT!!!! BUT WAIT. I WOULD DIE TOO, WOULDN'T I-arggh, he's done. I'm getting really sick of it. So any way this book was great and like last time, if you do not read this book and leave a review, I will ask Notch to ban you from playing minecraft forever. And again, just kidding. ~Ben, age 10
Read more
Helpful
Report abuse

D. Simmons
5.0 out of 5 stars Wow, I have nothing to say
Reviewed in the United States 🇺🇸 on July 23, 2020
Well that is a lie. I am taalking right now so… ok nevermind that lets get into the review. But before that lets talk about our sponcer… discord(I dont have a sponcer :( so I made my own hopefully discord or amazon blocks this review), if you are under 13 years old you can not do discord. THEY WILL BAN YOU. Now that the sponcer is out of the way lets get into the review.

Well I did find out that liam was the other but I was not expecting the cliffhanger. Also I think the new builder is my favorite chacter. And I like both Stuck in minecraft and Monster hunter equally. And I would like to be a crafter to sit back and relax. Also it is an honnor to review with tesla geek. He is a good reviewer. But why did everyone review early. I mean I did it but it is night. Anyways the book is god and epic cliffhangers await. It is nice that youhave a discord server but like I sad before you got to be 13. Oof. Lets get into the Wonderful Ideas.

Wonderful Ideas ( I told you they were wonderful)

3. Let jack make a strenth 3 potion so steve can bully Herobrine, liam ,and Leo out of the way.

Why did Liam choose to go agaist micheal/?

What is Herobrine backround?

Is Dionyos lieing and planning with herobrine?

Well that is it for today and have a nice day.

Kindle Customer
5.0 out of 5 stars Yay
Reviewed in the United States 🇺🇸 on February 2, 2021
I love this seirs! I on hope the next book in the series that's coming out is just as great! My favorite character.is Michael and I would like to see him make his own city! That would be sooooooo cool! ALso, I wanna make a character.

Bio:
Name: Lily
Age: 15
Looks: Brown hair with blue eyes, and a cute cat shirt.
Other: she is from the real world and herobrine had summoned her from e real world, but had refused to work for him, so she is an explorer
Read more
Helpful
Report abuse
See all reviews