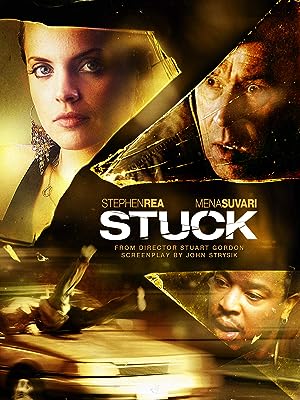 (183)6.41 h 25 min2008R
Brandi accidentally steers her car into a homeless man, movingly played by Stephen Rea (The Crying Game), sending him flying through the windshield.

In recent years, director Stuart Gordon has branched out from the H.P. Lovecraft adaptions he was famous for and started to creep towards more realistic scenarios, and although ‘Stuck’ is pretty far removed from the gorefest that is ‘Re-Animator’, it still has its fair share of gruesome moments and black humor. Based on real events, Gordon and writer John Strysik have injected the basic story with a venomous satirical slant that echoes classic George A.Romero and makes what could have been an already bizarre story into a rather more interesting tale.

The story centers around the tragic figure of Thomas Bardo (Stephen Rea), an unemployed man who gets thrown out of his lodgings for not paying his rent. After an unsuccessful visit to the employment office, where he is made to feel even more insignificant by his advisor by being told he isn’t on their system, even though he’s filled out all the correct forms already. Now jobless, homeless and with no cash at all, Thomas is forced to find a park bench to sleep on, where he befriends another homeless man who gives him a shopping cart. Meanwhile, elder care assistant Brandi (Mena Suvari, surprisingly quite good) is up for a promotion, and to celebrate she has gone out on the town with her friend and colleague Tanya, and her drug-dealing boyfriend Rashid (Russell Hornsby), who gives the girls ecstasy tablets. Brandi and Rashid leave the club and decide to meet up at Brandi’s house later on. Unwisely choosing to drive, Brandi makes her way home, but driving whilst on drugs and using a cell phone isn’t sensible as Brandi loses concentration for a second and hits Bardo, who had been moved on by the police and was on his way to a homeless shelter. Rather than bounce off the hood, though, Bardo goes headfirst into the windshield and manages to get stuck (do you see what they did there?) half in and half out of the car. Brandi panics and drives home, where she realizes that Bardo is still alive. She parks in her garage and goes in the house where Rashid turns up a few minutes later. Brandi tells him what happened but misses out the part about Bardo still being stuck in the windshield. Believing that Brandi hit a street bum and drove off, Rashid convinces her that no-one will come looking for a homeless guy and that she’s in the clear.

The next day, Brandi goes to work, and after a tense scene involving a taxi driver almost discovering Bardo in the garage, Brandi realises that she has left her cell phone in her car. Meanwhile, Bardo has also discovered it and tries to phone the police, although not knowing where he is could prove to be a problem. Also, the undocumented family who live next door have discovered Bardo but, due to their own predicament, don’t tell the authorities. Brandi also goes to see Rashid, who she finds in bed with another woman, and tells him the full story and asks for his help, as he has boasted about getting rid of bodies before. As Brandi soon discovers, though, his boasts turn out to be just that, as when Rashid goes to finish Bardo off, he gets more than he bargained for.

Overall, ‘Stuck’ is a gem of a movie. The cast are all pretty top notch in their roles, especially Stephen Rea as the hapless (though not for long) Bardo and Russell Hornsby as the cowardly Rashid, and given the incredible circumstances of the story, it’s all done pretty convincingly. Gordon’s direction is, as usual, tight and shows that he can handle more serious, dramatic subject matter with the same inventiveness he has displayed previously without resorting to dumbing down his style. There are moments of humor amongst the never gratuitous gore, and when combined with Gordon’s intelligent story telling, it all comes together to make a wonderfully entertaining movie. It isn’t perfect, but what movie is? The few editorial gaffes (like a windscreen shattering into shards in one shot, and being laminated in the next) are so minor that it doesn’t distract from the compelling story unfolding on the screen. As mentioned previously, there is also a satirical slant to the story, especially the scenes with Bardo at the employment office, and it can be said that the movie is a perfect "Bush administration film." As with all things, it’s there if you want to see it but it never overshadows the narrative.

There are those that say the events of this movie aren’t what really happened, but in the context of a movie, is that so important? The point is to entertain and maybe make you think a little, and on both of those points ‘Stuck’ can be called a success.

RobNHoodReviewed in the United States on October 25, 2021
4.0 out of 5 stars
Worth Watching
Verified purchase
Wow. This was a good movie with the right amount of cringe.

I could have done without the opening poop scene though but you can't have everything.

Many reviewers found humor in this movie so that would explain why a woman such as this would do nothing to help someone she hit and left him to suffer; too many sick minded people in this world.

The actual events as compared to movie:
The victim was a homeless mentally retarded man. It is quite apparent the driver had severe mental issues herself if not more so just because of what she did.

The driver was a black woman. Why they chose to change that fact I don't know. Maybe they were afraid in starting another racial war. Which is wrong because the driver (black woman) had less respect for him because he was white than if he had been black. No need to hide that, media certainly doesn't when it's in reverse.

Mallard (the actual driver) became a suspect after she was reported talking and laughing about the incident at a party some four months after the events. "I hit this white man", Mallard allegedly told acquaintance Maranda Daniel, while laughing.

The victim's son filed for wrongful death and settled out of court which was also wrong because the son obviously didn't care about his father when he was alive or he wouldn't have been homeless in the first place.

Coroner stated that if she had taken him to a hospital he would have survived the injuries and more than likely made a full recovery.

Driver was under the influence of pot, ecstasy and alcohol.

The driver along with a friend and her friends cousin did in fact ditch the body and car in a park and set fire to it as her boyfriend in the movie suggested to do.

Watching this movie gave me many emotions and laughter was not one of them. You have to be the wrong kind of sick to think it was funny. Mostly though, I was angry that anyone would or could do something like that. Even if I knew what was on the line and it was to save my own butt I could never allow anyone to suffer like that.

NalishaReviewed in the United States on November 28, 2018
3.0 out of 5 stars
Ending was nothing like the true story ending
Verified purchase
3 stars.
Beginning and middle great, however for it to be based on a true story .. the ending thumbs down. In real life, the lady told on herself, the boyfriend didn't die and the victim died causing the lady 50 years in prison (boyfriend and his cousin serving time also). NOW, if it wasn't based on a true story ... the ending was a cool with a karma will hit you ending! O I felt bad laughing at some scenes but the light humor was funny.
4 people found this helpful

Enduring LipSticks and BeautyReviewed in the United States on August 15, 2018
4.0 out of 5 stars
Totally Worth it for the Humor
Verified purchase
I liked how fast paced the movie was. Rashid's character, especially, was fun to watch. Overall, it was an entertaining 85 minutes. I had no idea it was based on a true story! The woman who actually killed the homeless man went to prison for 50 years. She was also black. So, it's odd that they used a white actress. But, then again...with all the racism happening at the time the movie came out, it's no wonder they didn't want to portray a black woman in a negative light.
4 people found this helpful

ProsperoReviewed in the United States on February 17, 2019
3.0 out of 5 stars
Suvari is why it is good
Verified purchase
It was OK, it seemed ridiculously drawn out to me although the whole thing takes place in 24 hours or so. Mena Suvari did an absolutely magnificent job on her part and really that's why this film is as good as it is. A different title might have helped get it more attention too

Barry L.Reviewed in the United States on October 1, 2019
5.0 out of 5 stars
It's a wow movie and based on facts, wow!
Verified purchase
Based on a true story and you wonder how depraved a person has to be for this movie plot to actually be true. Great movie.