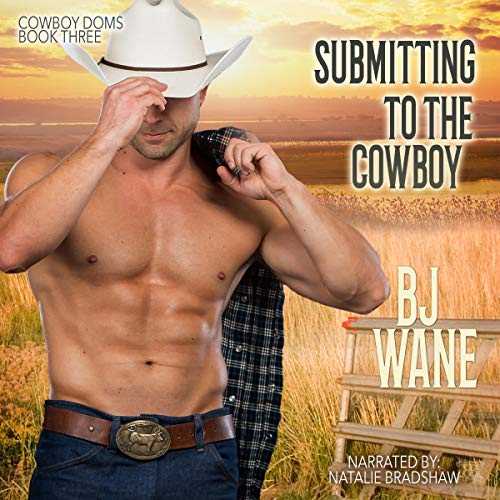 Submitting to the Cowboy: The Cowboy Doms Series, Book 3

Tamara Barton has lusted after Connor Dunbar ever since she was old enough to know what those stirrings meant whenever he was near. Connor’s refusal to see her as anything but the young girl he’s befriended and protected for years soon drives them apart, but not before she catches an up-close, personal glimpse of him exerting the dominant control she’s heard rumors about.

Connor regrets the harsh words he spoke to Tamara when he caught her spying on him - as much as his lustful response to the look of need reflected on her face. He’s been looking after the neighbor girl since the moment he saw her falling off her first horse at the age of 10, and doesn’t plan on stopping now that she’s a grown woman who thinks she wants their relationship to go in a different direction. He knows his sexual proclivities are not for the young, sweet kid he’s so fond of, and wouldn’t jeopardize their special bond by giving in to her desires.

But Tamara always did have a way of getting what she wanted, and when he sees she is serious about becoming a member of the private lifestyle club he owns with his brother and best friend, Connor discovers he doesn’t want her submitting to anyone but him. When he learns she’s kept things from him that could have impacted her welfare, will he allow his failure to protect her to drive another wedge between them, or finally embrace a life with her at his side as more than just a cherished friend?

This is book three in the Cowboy Doms series but reads as a standalone.

Special invitation from Audible!
Learn more about Membership
List Price: $14.95
You Save: $1.87 (13%)
By completing your purchase, you agree to Audible’s Conditions Of Use
Sold and delivered by Audible, an Amazon company
Share

Shweet Sandi
4.0 out of 5 stars Neighbor Girl to real love
Reviewed in the United States on May 5, 2021
Verified Purchase
This is the third book in the Cowboy Doms series and while each is a book on each on itself, believe me, you want to read each one, as the books are a family of friends in the BDSM Community. In this book, we are getting to know brother Conner better and the neighbor girl Tam (Tamara) who is finally back after being gone from her father's Ranch for 5 long years. She's quite a bit younger than Conner and had a thing for him as a kid and walked in on him as he was with a sub in the barn and well let's say Conner let her know she should not show up without being invited. After that, she moved away and stayed away from his ranch for 5 long years. Yes, that had him realizing something that we all knew he knew deep down and it shows up at her daddy's passing.
Now Tam is back at her Ranch minus on ex and so she is free to discover if she is into kink. Conner insists she is not and Tam thinks she is. Battle of the Dom/Sub.
I really love how our author includes the characters from past & future books in each book, It not that this community of Willow Ridge is a small town but the BDSM THE BARN is more of a Family in itself.
I am looking forward to the next book in this series.
Read more
One person found this helpful
Helpful
Report abuse

Redrabbitt
5.0 out of 5 stars BE A BAD GIRL FOR A CHANGE
Reviewed in the United States on April 14, 2019
Verified Purchase
What a great addition to a new series, Cowboy Doms. There are several authors that as soon as I see a new book by them, I can’t wait to read, and Ms. BJ Wane is one of those authors. She has a way of spinning a tale, with a great cast of characters, and wonderful dialog and interaction. Her women are strong, feisty, and her men are dominant alphas, making for a perfect combination.

The story is a bittersweet tale of friends that go their separate ways and many years later have a second chance at happiness. But, one is more than stubborn and doesn’t allow a relationship to grow—wanting to remain a friend and protector. Words said in anger, hurt feelings, will keep her away—but it also robs her of time with her father and stepmother. Now, Tamara is back, her father has passed away, and she is running the ranch, dealing with issues, and trying to cope with the distance still between her and Conner. What are best girlfriends for but encouragement and to prod Tamara into exploring into BDSM at The Barn, a club owned by the Dunbar brothers and the Sheriff?

The story is the journey into the BDSM lifestyle and for Conner and Tamara to explore their feelings. While she has been in love with Conner for more years than she can count, he still treats her like a child that he protects. When he sees her as a woman, one who is openly exploring the club, he freaks out, this isn’t supposed to happen, and he is determined to scare her off. The push and pull in their relationship keeps the pages turning and the chemistry between them sizzles off the pages, even if he doesn’t want to accept it. Will they be able to make things work now that they are both older? Or will he want to keep things as they used to be? What will open up Conner’s eyes to the truth?

“Thus began a friendship he never imagined would grow into an obsession to see to this girl’s every need, including ensuring her safety and happiness.
Read more
4 people found this helpful
Helpful
Report abuse

RatherBeReading
2.0 out of 5 stars Dreaded having to read this! Painful!
Reviewed in the United States on April 10, 2020
Verified Purchase
After reading most of Chapter One, I tossed this down and didn't pick it up for quite a few days. Dreading the whole having to get through the nasty 'after reunion' when Connor previously ran Tamera off and she left town for YEARS, after his careless, embarrassed ranting, only to her just having returned, had me gritting my teeth! Very, very, reluctantly, I decided to finish it. The author seemed to add in previously unknown scenes throughout, that made the whole thing barely tolerable, until I had finally forgiven him, and warmed up to them as a couple- then SMACK! The author abruptly ends the book with no epilogue! Very disappointed. 1.5 stars. Grammar was good, and liked Nan and her friends and stepmother, Amy. Hopefully, the rest will go on sale or this will be the end for me.
Read more
2 people found this helpful
Helpful
Report abuse

DCR
3.0 out of 5 stars Talk About Beating a Dead Horse
Reviewed in the United States on January 2, 2020
Verified Purchase
Minor spoilers, maybe. Genre: Western/B*SM/Frenemies to Lovers. I love a good B*SM novel; this was a fair attempt. The H, Conner, is maddeningly frustrating in his stubborn refusal to consider a relationship with h, Tamara "Tam" because of his misplaced sense of guardianship of her. That's the entire plot - H runs as fast as he can, and tries his best to discourage h's feelings for him and interest in the lifestyle. There was a bit of mystery/action that felt like an afterthought, especially with an ex-fiance thrown in for good measure. I would have enjoyed an abbreviated "discovery" period, and more emphasis on relationship building. The steamy scenes fell short for me, and they were few and far between. I've read Wane before, and I will consider her work again.
Read more
One person found this helpful
Helpful
Report abuse

Marybeth
5.0 out of 5 stars From friends to lovers
Reviewed in the United States on April 14, 2019
Verified Purchase
This is the third book in the series. You do not need to read the first two books to enjoy this book.

Tamara and Connor have been friends since she was 10 and he was 18. He taught her to ride, to compete, helped her with algebra and protected her from boys. When she was 25, she saw Connor in action with another woman and he saw the lust on her face. He didn't want their relationship to change, so he pushed her away. Unfortunately, he pushed her way for 5 years. Now she is back and she wants him.

I enjoyed Connor's story immensely. The push and shove were very entertaining. There was a satisfying HEA. I'm looking forward to Nan and Dan and Greg and Devin's stories!
Read more
One person found this helpful
Helpful
Report abuse
See all reviews

sue cridge
5.0 out of 5 stars Bonanza will was never like this.😂😂😂
Reviewed in the United Kingdom on April 25, 2019
Verified Purchase
I have read all three books, well so good romance, excitement big strong dominant protective men. What more can any woman ask for.
I had so much fun reading these books, would recommend them very highly. Escapism at its best. Thank you.💜💜💜💜
Read more
Report abuse

Sue xo
5.0 out of 5 stars Cannt put this series down
Reviewed in the United Kingdom on April 19, 2019
Verified Purchase
Book 3 and its a one click series for me. Love the way BJ writes. Love the characters and the way they all interact. Love this series. Cannt wait to read more x
Read more
Report abuse

Kindle Customer evelyn lawrence
5.0 out of 5 stars Review
Reviewed in the United Kingdom on January 26, 2020
Verified Purchase
That was ani interesting book could happen with any couple but I must I would ha e kicked his. Behind lo g ago
Read more
Report abuse