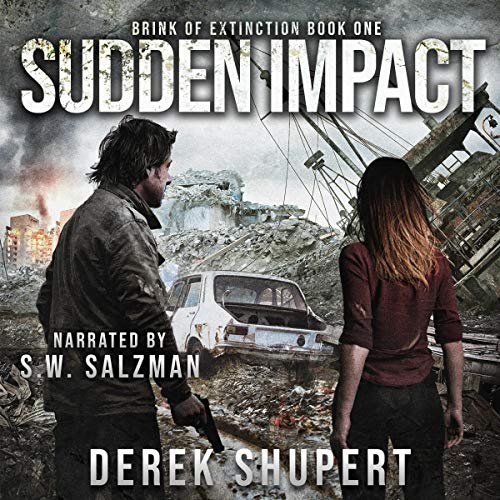 Derek Shupert (Author, Publisher), S.W. Salzman (Narrator)
4.3 out of 5 stars 99 ratings
See all formats and editions
Sorry, there was a problem loading this page. Try again.

The Sudden Impact started it all....

...and soon the skies would fill with ash.

How would they survive the apocalypse?

Cory’s life was hard. A horrific childhood, bad marriage, and a stint in prison set him on the path. His time in organized crime was miserable, but he had no choice. He did pick up a few skills along the way, though, and just in time for the end-of-the-world.

On a yacht off the California coast....

...he crossed the mob. The tsunami saved his life.

Would he survive the hitmen?

As Cory prepared to make his escape, fate put him in her path. Anna seemed helpless. He had to help, even if she slowed him down. Through all the looting, street gangs, and hysteria, he must find a way to get to his family in Indiana. No power, phones, or communication made things worse. Are they okay?

What is the state of the country?

What’s his next move?

You’ll love this brilliant start to the Brink of Extension series, because the stage is set for an epic adventure of survival.

4.3 out of 5 stars
4.3 out of 5
99 global ratings
How are ratings calculated?
To calculate the overall star rating and percentage breakdown by star, we don’t use a simple average. Instead, our system considers things like how recent a review is and if the reviewer bought the item on Amazon. It also analyzes reviews to verify trustworthiness.
Top reviews

Tina Langford
5.0 out of 5 stars Hit Man
Reviewed in the United States on June 16, 2021
Verified Purchase
This post apocalyptic book series is totally different than what was expected. However, it is a very well written and enjoyable
book series. There's just so much going on in this book it's a total suspense jammed. Full of characters that in their own little piece of this story of surviving. You will enjoy book one of "Sudden Impact".
Read more
Helpful
Report abuse

Kindle Customer
1.0 out of 5 stars Not so good
Reviewed in the United States on June 11, 2021
Verified Purchase
The title is misleading. The apocalypse is minor background. The story is basically a mob enforcer chased by hit men and gangbangers.
Read more
One person found this helpful
Helpful
Report abuse

Kindle Customer
2.0 out of 5 stars Repetitive
Reviewed in the United States on January 31, 2021
Great book to read while playing a drinking game. Take a shot every time you read "9MM or red mist" and you would be hammered by the 3 chapter and dead by alcohol poisoning by the end of the book. I think the story had so much to offer but there is more guns than Glocks, Uzi and AKs. The author used the same lines over and over. I read the brand of the bad guys knife like 6 times. Really the story wasn't bad but change up the dialogue a bit.
Read more
10 people found this helpful
Helpful
Report abuse

Pam Shelton-Anderson
2.0 out of 5 stars Very unpleasant characters
Reviewed in the United States on June 11, 2021
I always need someone to cheer for and a character with whom I can engage. Absolutely no one in this book falls into this category. Everyone is a criminal and brutal killer. Anna had possibility as the sole good person, but shade was thrown on her chance encounter with Cory and made her very sus as well. It is not even clear what caused the tsunami and subsequent earthquake, but it only seems to have been a vehicle for chaos and complete lack of law enforcement. The only Brink of Extinction is at the hands of vicious hitmen and gang members. I did manage to finish this (and the editing was actually decent), but I won't continue since I don't care if any of these characters survive and hope most won't.
Read more
2 people found this helpful
Helpful
Report abuse

Laura Enns
2.0 out of 5 stars Not a post apocalyptic novel
Reviewed in the United States on June 18, 2021
It was hard for me to get past the first chapter and I love the genre. Knowing the difference between John Henry and John Hancock needs to be known if you are talking about signatures. I couldn't even finish this book because its more of a mob hit man novel as opposed to post apocalypti. The only reason I'm giving it 2 stars is because maybe it gets better but I am just not willing to wade through the muck to find out.
Read more
2 people found this helpful
Helpful
Report abuse

Zippy Inger
5.0 out of 5 stars I enjoyed it very much.
Reviewed in the United States on February 2, 2021
I enjoyed this story. Kept me on my toes so to speak. I expected more disaster than manhunt because of the title. But it was very entertaining. Great characters and well written. No sexual content but does have a lot of violence. Recommend for late teens and up. I received an advance review copy for free, and I am leaving this review voluntarily.
Read more
One person found this helpful
Helpful
Report abuse

Pat
3.0 out of 5 stars A So-So Read
Reviewed in the United States on April 5, 2021
Sudden Impact is an okay read.
Read more
2 people found this helpful
Helpful
Report abuse

Rob Bartley, Author of "One More Silver Dollar"
5.0 out of 5 stars Rapid paced action thrillier!
Reviewed in the United States on February 26, 2021
The chase is on as a former mobster struggles to escape a hitman and a city during the aftermath of a disaster. The action is relentlessly paced and well written. A great series starter to check out!
Read more
2 people found this helpful
Helpful
Report abuse
See all reviews

Tonkagurl
5.0 out of 5 stars I am really liking this authors books
Reviewed in Canada on May 8, 2021
Verified Purchase
Book 1 is a great book to start. This is a great book and great story.
Read more
Report abuse
See all reviews
Back to top
Get to Know Us
Make Money with Us
Amazon Payment Products
Let Us Help You
EnglishChoose a language for shopping. United StatesChoose a country/region for shopping.
© 1996-2021, Amazon.com, Inc. or its affiliates