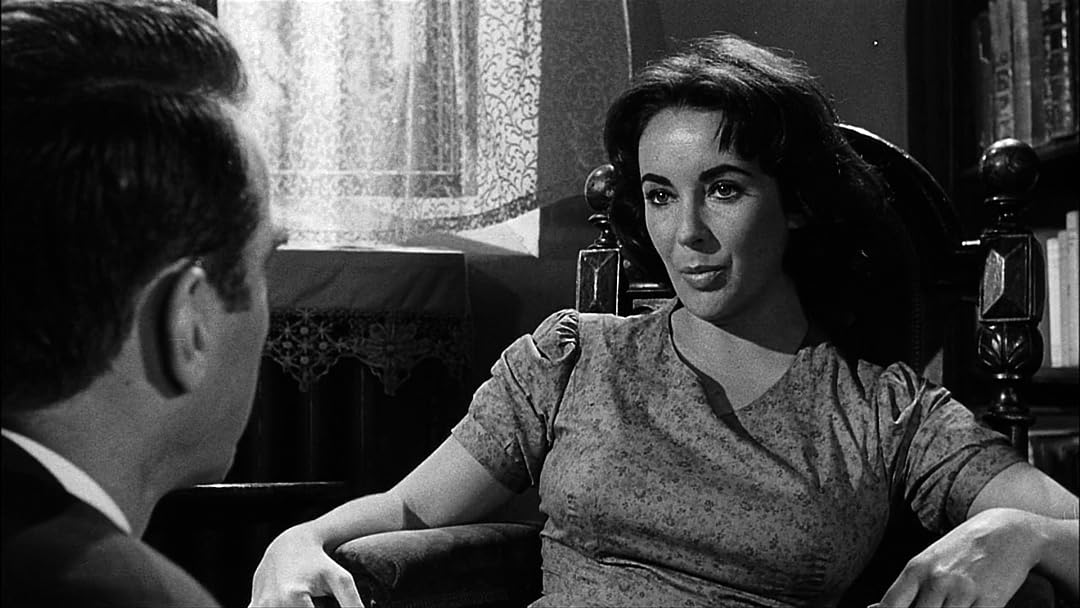 (959)
7.61 h 54 min195913+
A beautiful girl is committed to a mental institution after witnessing the violent death of her cousin. The doctor uses a truth serum on her and confirms his suspicions that her "hallucinations" areindeed fact. The shock causes her wealthy aunt to relapse into unreality.

Nick ZegaracReviewed in the United States on January 10, 2017
5.0 out of 5 stars
Bone-chilling drama with plenty of punch and some truly haunted inspiration
Verified purchase
Joseph Mankiewicz's bizarre drama about lobotomizing a young woman who has witnessed her cousin being eaten alive by homoerotic cannibals is as perversely gripping and bone-chilling as ever. Elizabeth Taylor and Katherine Hepburn give outstanding performances. Another region free Blu from Madman Entertainment that is sure to please - light years ahead of the now defunct Columbia Classics DVD put out by Sony. This new remaster is, of course, from Sony, and licensed by Madman and it looks utterly fabulous. Solid grain, exquisite B&W tonality and pitch perfect contrast. You are going to LOVE this disc. Buy today. Treasure forever. A truly underrated classic and a movie that could never be made today!
29 people found this helpful

Raymond (Rex) JacobsenReviewed in the United States on March 9, 2021
5.0 out of 5 stars
Great movie, impeccable transfer.
Verified purchase
So, unless you're not familiar with the movie's content, you know it's not the "feel-good movie of the year" --- but, it is something to behold. Great, gothic storytelling with amazing performances from all involved, even down to the smallest roles. But Katherine Hepburn, who has never been more evil and captivating, and Elizabeth Taylor, who has never been more vulnerable or beautiful, make this movie what it is --- a sublimely decadent indulgence into weirdness. Loved every moment, have seen it quite a few times over my 58 years, but this Twilight Time limited edition disc makes it look and sound brand new, like I was watching it for the very first time. Totally worth the price!
3 people found this helpful

Suzanne M. WheatReviewed in the United States on April 24, 2020
5.0 out of 5 stars
Tennessee Williams was a Genius
Verified purchase
I've seen this film in the past. I wanted to get a better understanding of its themes. Beautifully done and deep. Themes of homosexuality, wealth and entitlement, sad state of mental health treatment at the time. Montgomery Clift and Elizabeth Taylor were close friends until he passed away and Liz became a strong advocate for the gay community. Cat on a Hot Tin Roof and Sweet Bird of Youth are others. Also Nelson Algren's Walk on the Wild Side and Man with the Golden Arm are in this genre. So much to re-explore if you are over 70 like me. Classics.
3 people found this helpful

FrankReviewed in the United States on July 30, 2017
5.0 out of 5 stars
Elizabeth Taylor in her prime. Great movie
Verified purchase
Never get tired of watching this. This was made after Montgomery Cliff's car accident. Supposedly, by the time this was shot he was addicted to both alcohol and pain killers and it took a great deal of effort on everyone's part to get him through the movie. There are some great stories about Hepburn, Mankowitz, Cliff and Taylor having a difficult time getting along. Regardless, Cliff shines, as do the other cast members.
13 people found this helpful

Jon A. Stone Jr.Reviewed in the United States on July 30, 2021
5.0 out of 5 stars
Amazing Movie and Great DVD release
Verified purchase
"Suddenly, Last Summer" is one of my absolute favorite movies...won't go into the storyline or stellar performances, because other fans out there will already know what I'm talking about, and the fact that this is such a CLASSIC movie and an absolute MUST-HAVE in the video library. I had a DVD that was just the full-screen version, but decided to purchase the Columbia Classics widescreen DVD release...oh dear God, what a difference! I'm not into the whole Blu-Ray thing, but this DVD is more than sufficient. A beautiful print, so crisp and clear and in its widescreen glory...why did I wait so long?! Not a lot of special features to speak of, but I sat and watched it (laughing, balling my eyes out and reveling in the insanity) wondering why I'd waited so long to add this DVD release to the collection. Buy it before it goes out-of-print and you have to pay $100 for a copy...

JeffReviewed in the United States on February 19, 2019
4.0 out of 5 stars
The ending is the movie, great movie.
Verified purchase
Summer is an excellent movie with great actors great story etc. Elizabeth Taylor is in a mental institute but why? She tells a tale that auntie does not like and denies about her cousin son of Hepburn. It's an unpleasant story, hard to believe. Her aunt (Katherine Hepburn) keeps insisting on a lobotomy for some reason. We will learn what really went on with Elizabeth (sorry I cant recall her film name) and auntie's son. For it's day this movie is ahead of it's time. They don't make many like this one even today.
2 people found this helpful

CMCReviewed in the United States on August 25, 2013
5.0 out of 5 stars
Extraordinary!
Verified purchase
I loved everything about this movie. To start with, there is incredible acting from Katherine Hepburn, Mercedes McCambridge, Elizabeth Taylor and Montgomery Clift. The movie opens with Montgomery Clift, as a psychiatrist and neurosurgeon, performing a lobotomy in a state hospital. A lot of the movie takes place inside the walls of a state psychiatric hospital, and that theme was titillating during that time in history. The movie was supposed to take place in 1937, but the movie was made in 1959. It was just 3 years later, in 1962, that Kennedy was in office, and that the U.S. closed all the state run psychiatric facilities in the real world. There was a lot of interest within the public about what went on behind the walls of "mental hospitals". There was a lot of interest in Elizabeth Taylor and Montgomery Clift romantically, and rumors about Clift's homosexuality. Put all this together with the plot of the movie, and you have a huge audience. It was unbelievably easy to rent through Amazon. The movie was on my computer in less than 30 seconds.

I remember being a child when the movie came out and hearing adults whispering about the movie. Of course, my curiosity was peaked. I would ask my mom over and over to tell me what the movie was about - what everyone was talking about. I never really found out all the angles. When I rented this movie, I watched it three times back to back, absorbing every sentence, every nuance by the cast.

I still can't believe that the movie made it through censorship. I read that the cast was not allowed to say "homosexuality" and not refer to it during the filming. The first time I saw the movie, in my twenties, I really didn't understand it. I couldn't figure out what all the fuss was about. This is a great movie for today's audiences. It was ahead of it's time. Watching it recently, I was at the edge of my seat. It won't appeal to everyone. I was a nursing student when I got part of my psychiatric clinical experience in a similar institution in Canada. I know those places existed. There were patients there who had lobotomies. For me,the movie has everything, wrapped up in one production. It's still controversial....and it's an extraordinary piece of film.

Allen SmallingReviewed in the United States on October 11, 2017
5.0 out of 5 stars
"We have to put an end to that girl's obscene babbling!" ~~
Verified purchase
This may not be the best movie from director Joseph Mankiewicz, or stars Elizabeth Taylor, Montgomery Clift or Katharine Hepburn, but it's a wonderful frightfest in a non-occult way. Set in New Orleans in the 1930s, lovely Catherine Holly (Taylor), terrorized into near-dementia by the murder of her poet cousin Sebastian on a Spanish trip, must contend with her wealthy aunt Violet (Hepburn), who wants the girl institutionalized and lobotomized. The promising new surgeon from Chicago, played by Clift, is caught in the middle.

This 1959 B&W feature, based on a play by Tennessee Williams and expanded by Gore Vidal, was intended to shock, but much of that shock depends on (spoiler) the then-taboo nature of Sebastian's homosexuality. Still, it's scary and at times profound. Might be worth seeing during Hallowe'en season as a literate and bloodless alternative to the buckets-of-gore horror movie more typical this time of year. A wonderful supporting cast includes Albert Dekker and Mercedes McCambridge. Recommended, and currently a good deal.