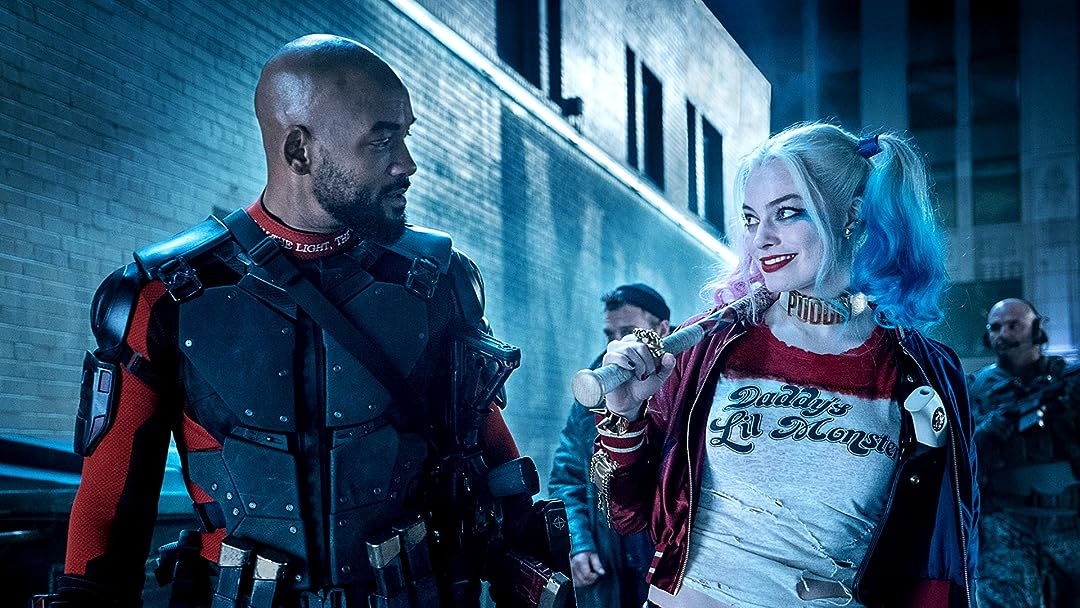 excusethebloodReviewed in the United States on October 13, 2020
2.0 out of 5 stars
Have low expectations
Verified purchase
Although fun(ish) to watch at times, and visually dazzling at others, this is one of the most poorly written and thought out movies I've ever seen. It tries hard to be edgy when the final result is just cringe, the character introductions play out like a toddler trying to tell a story, and their solution to the problem in the movie, as well as the reason they need the solution in the first place, is not convincing at all.

Margot Robbie does a good job playing Harley, and the visual design of Enchantress was excellent.

This extended edition adds some content to the Joker scenes. It doesn't add anything essential or anything that adds to the story, but if you're going to watch the movie you might as well do it right and get all the Joker scenes.

craig justiceReviewed in the United States on November 14, 2021
1.0 out of 5 stars
Unwatchable
Verified purchase
Compared to the first this is absolute garbage.It is patently unwatchable.Some of the characters in the first were obviously a stretch but a walking talking shark ? This is bad Saturday morning children's cartoon stuff.We gave it 15 minutes and shut it.Clumsy awful "where is this going " mind numbingly bad.
10 people found this helpful

Fryzilla: King of the MonstersReviewed in the United States on October 14, 2021
4.0 out of 5 stars
Suicide Squad 2: James Gunn's Boogaloo
Verified purchase
What can I say, this is a HUGE improvement over the first Suicide Squad movie. It kind of feels like an R-rated Guardians of the Galaxy movie since its directed by James Gunn, and King Shark is this movie's Groot. Its weird, action packed, funny, and touching in some parts, hell they even made C-list Batman villain Polka Dot Man a compelling character. I did feel that Peter Capaldi was wasted in this movie, and I didn't think that Jai Courtney's Captain Boomerang had to be killed off so unceremoniously. Also I would have lived a happy life without seeing John Cena in his underwear. Despite all that this was a surprisingly good movie, and it was cool seeing Starro on the big screen. If this is the directing that future Suicide Squad movies are going towards, then I am all for it. Also we need more King Shark, he is too precious!
7 people found this helpful

joel wingReviewed in the United States on December 15, 2021
4.0 out of 5 stars
It's twisted funny and bloody!
Verified purchase
Suicide Squad was hands down the best of the current run of DC films. Then this sequel came up and there were some big questions hanging over it. First, almost the entire cast changed with only Margo Robbie as Harley Quinn, Joel Kinnaman as Rick Flag and Viola Davis as Amanda Waller returning. James Gunn also took over directorial duties and wrote the screenplay. Could it stand up to the original? I thought it did even though it had a different sensibility to it.

The beginning is great because it’s a spoof of the original movie. You get a mostly new cast of characters being put together by Davis. There’s a big American flag in the background. You think they’re going to kick butt but they are a bunch of total screw ups. It’s hilarious and an example of Gunn’s sense of humor.

Out of the new characters John Cena as Peacemaker has to walk away with the best of the best. He’s an American patriot and a complete idiot. Gunn did some great writing on his dialogue making it completely ridiculous.

This is what I meant by a different sensibility. There’s a lot more comedy and it really works. It makes for a real worthwhile viewing experience. It’s twisted. It’s funny. It’s bloody!

P.S. – There’s a special ending after the credits.
4 people found this helpful

HolyJIEbusReviewed in the United States on November 16, 2016
4.0 out of 5 stars
Better than the Theatrical Version but won't Change Your Mind about the Movie if You didn't Like it in the First Place
Movie Review (8.5/10) “Great!”
Suicide Squad Extended Cut
Director: David Ayer
If you didn’t like the theatrical edition of this movie, then this version won’t persuade you that this is a good movie. But if you were a fan of the theatrical edition and you watch this version, the you won’t be able to go back to the theatrical edition because this edition fleshes out the characters a bit more and explains a few more things.
Things that were added or changed:
-extended intros (David Ayer has a cameo!)
-extended torture scene of Joker torturing Dr. Harleen Quinzel.
-new chase scene with Quinzel and the Joker.
-more dialogue and interaction between the Squad members: my favorite scene was probably the one between Harley Quinn and Katana.
-the movie extends the scenes of how the weird looking putty creatures that served Enchantress came to be and explains what they are more in detail (I don’t know why this was left on the cutting floor).
-extended action scenes as the fight on the street, fight in the building, and the last fight scenes get more material. This actually helped the underwater Killer Croc scene since and you could see more clearer what was going on during that time.
If you loved the theatrical edition then I recommend you get this version of the movie as it will only add to your enjoyment of this movie, and you get more character development from the Squad members. However, if you thought the extra 15 minutes of footage could somehow save the movie you did not like, I would say that you should pass on it because the story is pretty much still the same, and this version of the movie doesn’t fix all of the problems of the theatrical version of the film.
238 people found this helpful

Marcia BlackwoodReviewed in the United States on November 27, 2021
2.0 out of 5 stars
A few great moments in a huge mess of a movie
Verified purchase
I don't even usually write reviews but had to say something about this movie since I just feel bad for it. It never gets its legs under it, largely because it keeps tripping on itself, if not shooting itself in both feet and at least one major organ. I don't understand why it's so awful most of the time, since Guardians got everything right that this movie gets so wrong.

2021's go at Suicide Squad is probably worth a watch once the price goes down or it's free, just to see the sometimes amazing graphics (the horror scenes are indeed horrifying) and occasional brilliant sequences (like Robbie breaking out of confinement). But check your brain and your heart at the door. Even the talented cast and top-shelf CGI staff couldn't save themselves from this bare-bones plot with bizarrely poor writing, pacing and character development.

The most painful part is it keeps trying to be a good, multi-dimensional movie, then takes what it's building and abandons it for a usually cheap and unfunny joke. It just keeps gutting itself.

If you watch it and love it, I'm super happy for you: I am. I just felt angry for the characters most of the time. Like, all the characters, including the extras. Horror and humor are natural partners since comedy saves us from going bonkers from tragedy. But here, the horror is just horrible, and the humor doesn't so much alleviate the horror as it deflates it of meaning. Guardians gets the mix of pathos and hilarity absolutely perfect. This movie has all the right ingredients but can't figure out what it wants the recipe to be.

The heroes get short enough shrift, but the big-boss menace really gets the worst treatment, which is just plain sad. Suicide Squad tries to show us who the real villains are (which is hackneyed but nonetheless relevant) but then devolves into villain-of-the-week nonsense we saw too much in the X-Men comics at times (and I love the X-Men).

It could have been a great movie showing how the underdog "bad guys" are often much more human than our supposed "good guys." This movie totally gets that surface humor can mask appalling heartlessness, and it portrays that without apology. Which maybe is one of my biggest disappointments with it, because if it had managed to walk that challenging tightrope, it would easily have been a 5-star film.
2 people found this helpful

Jessica WeissenburgerReviewed in the United States on November 9, 2021
5.0 out of 5 stars
One of My Favorite DC Movies
Verified purchase
Definitely one of my favorite DC movies. I'm probably in the minority that actually enjoyed the first movie (there were some issues with it, but overall I was entertained). This movie was definitely entertaining and there was some solid character development. I enjoyed everything about this movie - the gradual friendship formed between the team and their gradual improvement as a team. There were a lot of humorous moments in this movie and you could definitely see the humor of James Gunn in a lot of it.

I was surprised that I came away from this movie really liking Rick Flag -- Joel Kinnaman did a great job. I liked him alright in the first movie, but this one he came across as more of a badass and more capable. I think it helped that this film had a solid direction throughout the whole thing and didn't get hurt by the Joker being shoved into the film randomly or the studio doing a sloppy editing job.

I'd say this is probably one of my favorite DC movies next to the Dark Knight, The Joker, and Wonder Woman. If you were a fan of the Guardians of the Galaxy I think that this movie is probably right up your alley as far as humor goes. I really am looking forward to seeing the Peacemaker TV series. A sentence I never thought I'd utter.
One person found this helpful

Matthew R ThompsonReviewed in the United States on October 13, 2019
5.0 out of 5 stars
Better than theatrical, but it likely won't change your mind
Verified purchase
I liked Suicide Squad in theaters. I never understood the hate that the movie got to begin with - but I absolutely love the extended scenes. They added a lot more to the movie that I felt it was lacking. Especially because I love the development of Joker and Harley. It's a well debated thing between myself and my friends whether or not Leto played a "good" Joker, but I absolutely love this take on Joker. It's unique, it's definitely Leto, and it's not trying to redo and replay any of the others. I appreciate it for that - and I honestly wanted more of them.

Honestly, the movie needed to be longer. Or have more parts. I thought all of the characters were really interesting and probably deserved more time than they were given. It likely would've fleshed out a lot. All in all, though, I just really like this movie and think it gets more digs on it then it should.
6 people found this helpful
See all reviews
Back to top
Get to Know Us
Make Money with Us
Amazon Payment Products
Let Us Help You
EnglishChoose a language for shopping. United StatesChoose a country/region for shopping.
© 1996-2022, Amazon.com, Inc. or its affiliates