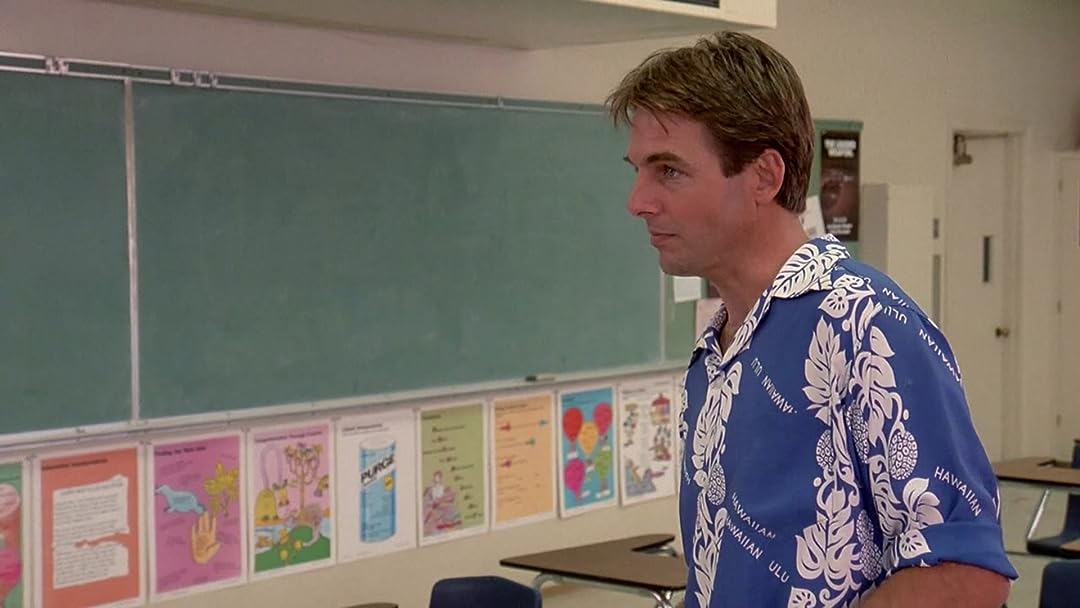 Leaves Cinemax in 6 daysRentals include 30 days to start watching this video and 48 hours to finish once started.

Mark D. BurghReviewed in the United States on September 19, 2015
4.0 out of 5 stars
A Comedy With Surprising Depth
Verified purchase
As some one who has spent his life teaching, I find summer school to be one of the better films about the profession. Who has never been forced to teach a class they never wanted to teach? Who has never taught students who are not interested and undereducated, and hostile? Who hasn't been in over their heads in a classroom? Well, maybe not all who teach have had these experiences, but I have. This a movie that doesn't take itself too seriously, and the insouciance of Mark Harmon's Mr. Shoop is a portrait of a teacher who doesn't care, a rara avis in the world of film teachers. Usually the reverse is true; the kids don't care and teacher converts them. But here we have a growing mutuality that gives this seeming nothing of a film a real depth of understanding of the synergistic relationship between students and teachers. Shoop is set up to fail with this class, and nearly does, but by extending himself to his students through bribery (a common and effective tactic) he manages to overcome their indifference, and his own lassitude.
14 people found this helpful

Dr. PaulReviewed in the United States on August 4, 2021
5.0 out of 5 stars
Still fun in the summer with this group!
Verified purchase
Mark Harmon leads the way in this totally fun and highly inappropriate summer fun film. Don’t worry if you’ve been sentenced to this Summer School, it’s a great way to spend time with your friends. An 80s standard, learn all the things not to do if you’re a teacher, but want to do if you’re a student! Harmon gets himself wrangled into teaching summer school, only to find he’s given the worst students in the classroom next to the pretty teacher (Kirsti Ally), and having to bring the kids up to standards while having no idea what he’s doing. What could go wrong? Add in they hold him to bribing them into working and you have the pretty girl who needs a home, the guys who love horror films, and do forth... it’s topped off with a dog. Nice way to spend summer. Being a teen in the 80s, this was how many of us wish we’d spent our summers - I was still glad I never had to actually go to summer school, but if it had been like this... Now it’s a look back and still fun under the sun. And a great date night movie.

RootinTootinReviewed in the United States on July 18, 2020
4.0 out of 5 stars
Flimsy case, otherwise disc works and movie resolution ok
Verified purchase
The movie is great and you really can't beat the price. The video quality looks ok. It is grainy / doesn't look remastered, looks like it did on VHS in the 90s. The menu is basic, not a lot of bells and whistles if you care about that type of thing. The only real bummer that the case is super flimsy. Very thin plastic and when you open it you'll find that it's not even solid plastic on either side. There are flower petal shaped cutouts on either side where the disc sits. This DVD, along with two others I ordered at the same time, all came in a padded envelope together, not a box, and had been shoved into my mailbox by the postman. When I took the DVDs out of the envelope, I was a little concerned because the cases all looked crumpled and bent. Luckily the discs were fine.

movienutReviewed in the United States on May 28, 2019
5.0 out of 5 stars
Never give up!
Verified purchase
I had seen this movie when I was younger and was so happy to see it again. It's a good clean movie that teaches a younger generation that you should never give up. And that as long as you try that's all that matters. Plus it also teaches you to never give up on love and to always be yourself. Never change to please someone else.
Plus I love Mark Harmon and he is so cute in this movie.
2 people found this helpful

MovieFannReviewed in the United States on December 4, 2013
3.0 out of 5 stars
How I Spent My Summer Vacation
Verified purchase
This is one of the delightful, sophomoric humor flicks the 80's were notable for. Mark Harmon, cast as a beach bum/Gym Teacher seemed a questionable choice however as the movie unfolds he displays an evolving character whose sense of humor covers the true reason he became a teacher. Having to teach remedial subjects to a variety of academic (and social) misfits prove a challenge he is unprepared to meet......in particular, the teen duo whose preoccupation with slasher films and his romantic attraction to another teacher (Kirstie Alley) whose no-nonsense approach to education, becomes the focal points of his endeavors. Rampant hormones, colorful dialogue and a cast of handsome actors more than temper a weak script. This film is reminiscent of a successful TV Sitcom-Welcome Back Kotter only this is the West Coast update with more depth of characters. There are ample laughs here if you suspend belief and simply enjoy the actors that Carl Reiner guides through their adolescent issues of acceptance, sexuality, self realization and individuality.............
6 people found this helpful

Onegoodguy1980sReviewed in the United States on August 28, 2018
5.0 out of 5 stars
bring good ol 80s memories back
Verified purchase
The relaxing atmosphere of California is one of its kind in USA. The Californians laid back lives are filled with fun , happiness and joy. This movie highlights just same aspect of their lives that if everyone is kind to other there will be peace and happiness. I like this movie a lot and would always put it on when i want to get some strange and nostalgic.
2 people found this helpful

I find it to be hilarious but then again I am a product of the 80's ;)

M.W.Reviewed in the United States on March 14, 2015
5.0 out of 5 stars
good 80's movie :)
Verified purchase
i really love this one. he's a gym teacher in high school who is so laid back he plays with his dog during the classes lol.. so when he's forced to teach summer school english to some of the worst performing students who all have interesting quirks lol, he's got his work cut out for him. but thankfully he manages to get a more serious teacher, kirstie alley, to help him get the students to hopefully pass the test they failed before. simple and fun to watch movie, and a fave of mine from the 80's.
One person found this helpful
See all reviews
Back to top
Get to Know Us
Make Money with Us
Amazon Payment Products
Let Us Help You
EnglishChoose a language for shopping. United StatesChoose a country/region for shopping.
© 1996-2021, Amazon.com, Inc. or its affiliates