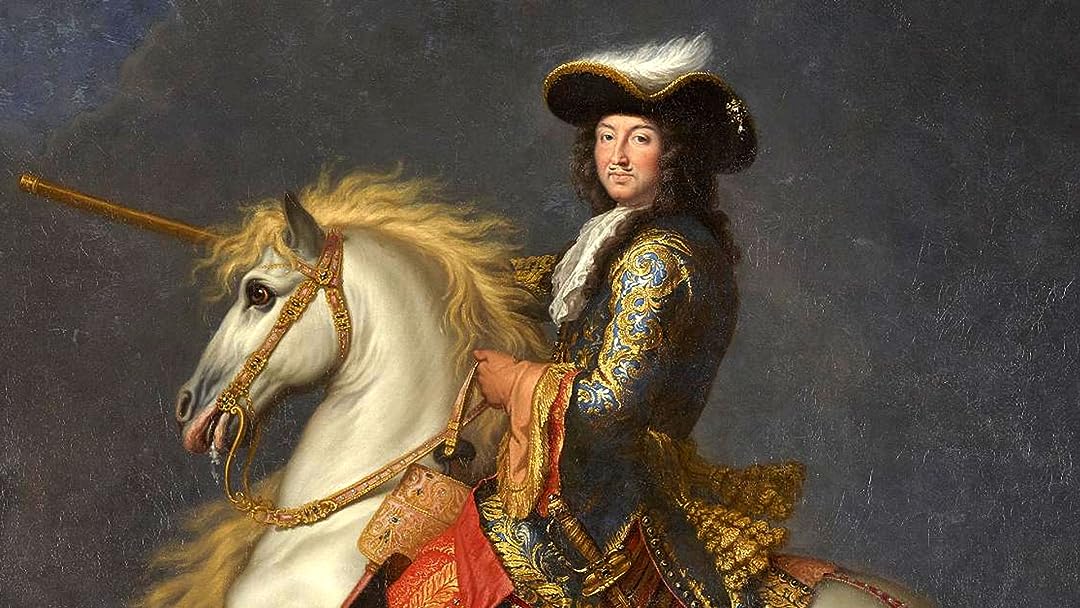 The Sun King Is Dead

(46)
52min201513+
What happens after the death of an immortal? Following the longest reign in world history, King Louis XIV - the Sun King - passed at 76 in the Chateau of Versailles. Long rumored to be blessed with eternal life, Louis' death caused controversy that would change Europe forever. This is the story of the Sun King's death, and its aftermath.

KayteCanDoReviewed in the United States on November 26, 2018
5.0 out of 5 stars
So You Thought You Knew Everything About the Sun King of France?
Verified purchase
I was amazed to discover how much I did not know about the funerary customs for the royals in France during this period in history. The information is presented in a fresh and interesting manner with plenty of artifacts and critical historical documents to keep the viewer mesmerized. As a student of anthropology, the cultural habits of humans from all epochs never fail to surprise. I am certain it all seems rather macabre to us in the 21st century but ritual is still of upmost importance to many cultures in our world today. It is not surprising the royals' tombs were disturbed during the riots and revolutions in such a disrespectful manner. Society has done the same through out history by disturbing the burial places of many civilizations in the name of science, religion and political upheaval. This film was a real eye-opener! A must-see for anyone interested in French history. Bravo!
12 people found this helpful

John P. Jones IIIReviewed in the United States on December 22, 2019
5.0 out of 5 stars
The downside of longevity…
Verified purchase
… you outlive all your friends; perhaps more satisfyingly, you even outlive all your enemies, but you may at least now wonder what the conflict was all about.

Sylvie Faiveley is the director of this documentary which focused on the last days of “the Sun King,” Louis XIV, the European monarch who reigned the longest of any monarch. He was on the throne for 72 years, plus. Queen Elizabeth II, by contrast, still has a ways to go to catch him. On February 06, 2020, she will have been on the throne 68 years.

The documentary commences more than three quarters of a century after Louis XIV’s death, which was in 1715. In 1793, during the height of the French revolution, the royal tombs of all the monarchs of France, which were at the basilica of St. Denis (outside Paris), were desecrated. The remains were removed and tossed in a common grave. When this occurred, the blackened corpse of Louis XIV was found. It was the revolutionaries’ way of saying there is no going back, which would ultimately prove to be not true. Louis XVIII would rule from 1814 to 1824, and would lie in the necropolis which was restored 25 years after its desecration.

The focus of the documentary, as the title implies, was on the last days of the King, and a bit beyond. The background to those days was provided. He would become king, in 1643, at the age of five, under a regency. During his reign, there would be famine and disease, a million deaths, 5% of the entire population, due to a mini-Ice Age. His reign was also marked by seemingly endless wars; the War of the Spanish Succession lasted 15 years. Of course, there was the building of his palace at Versailles. Very small privileges would establish rank among the many courtiers at the Court; Louis XIV would use these privileges to divide and rule. His heirs would die before him, his son in 1711, his grandson, the year thereafter.

Louis XIV would die of gangrene. His doctor, Fagon, misdiagnosed the problem for too long. Eventually, amputation was considered a possibility, but it was too late. Louis XIV was determined to demonstrate a “good death,” with sang-froid, as the French would say. He had previously demonstrated his composure in 1685, during an operation for an anal fistula, which was conducted, naturally for the times, without anesthetic or antibiotics for infection. Ouch! His entire life had been conducted in public. The King literally stank of death from the gangrene before he finally died. After his death, his body would be separated into three parts, for burial in various parts of France. It would be his great-grandson who would assume the throne, ironically at the same age Louis XIV had, at the age of five.

There was some good historical reenactment. The documentary informed me of much that I had been previously unaware, always a good measure for providing a 5-star rating.

Jonathan BaronReviewed in the United States on December 14, 2020
3.0 out of 5 stars
A Strange But Understandable Form of Pride
Verified purchase
First, no he was not the longest-serving monarch in world history as both the description and the documentary itself assert. That alleged honor belongs to Pepi II, the last Old Kingdom Pharoah of Egypt who ruled for 94 years. Yet both cases illustrate a similar problem with kings who rule too long. In Pepi's case, a dark age followed. In the case of France, a continuation of conservative rule resulting, albeit 74 years later, in a violent revolution followed by the even more violent rule of a dictator.

Louis XIV led his nation to ruin. Yet the tone of this documentary is pride. Pride in Louis himself, pride in the lavishness of his court, pride of the French in their history. Yet this is a common, understandable phenomenon as nations decline on the world stage. An astonishing number of Russians today view Joseph Stalin with both favor and nostalgia for example. Nonetheless, this is not a bad documentary at all. The sheer level of detail is quite fascinating.
4 people found this helpful

Mike SchonsReviewed in the United States on November 16, 2020
1.0 out of 5 stars
Not much of importance to see here
Verified purchase
While there are some interesting, very short, asides to give this piece some historical context, and plenty of eye-candy pictures of Versailles (and other opulent venues) to distract you, this is a boring, slightly macabre and overwhelming detailed, day-by-day description of the lingering illness and death of Louis XlV.
If you like this sort of thing, have at it
This man had one of the longest and most significant monarchies of European history and has been well covered in many fine books and films, all of which had the decency to relegate these final months to a few paragraphs or scenes. See those instead.
5 people found this helpful

Lochlan LongstriderReviewed in the United States on January 4, 2021
3.0 out of 5 stars
The king is dying
Verified purchase
This is not a documentary of the aftermath and legacy of Louis XIV. No, this is a nearly day-by-day recounting of his death and subsequent funeral. Brief mention is given to his little five-year-old heir and the regent, the Duke of Orlean who annulled the king's will in Parliament. Mention is made of the desecration of the tomb during the revolution and that his corpse was black. Probably colored by the gangrenous bacteria that had killed him. No mention of how his former mistress and then second wife, Madame de Maintenon became headmistress of a girl's school. Sort of like a high priced prostitute becoming the head of a finishing school. Just another form of statecraft I guess.
One person found this helpful

Charles PhillipsReviewed in the United States on February 5, 2021
4.0 out of 5 stars
A little oversold, but interesting
Verified purchase
I think they oversell it a bit in the description, the 'controversy' that they claim that changed Europe forever is not clear in the actual video. If they were referring to the coming French Revolution, it's not stated anywhere. Otherwise, I missed whatever controversy they were attempting to describe.

On the other side, however, this is a wonderful description of the daily court life and intrigues of early 18th Century France, an examination of the fatigue of an extremely long and unchanging reign, and a political moment in early modern European history. On that alone, I enjoyed it and I think it stands on its own merits without needing to inject overdramatic promises in the description.
One person found this helpful

GZPReviewed in the United States on November 3, 2018
4.0 out of 5 stars
VERY UNUSUAL
Verified purchase
The film is entirely devoted to the details of the king's last illness, death and burial. Very well done with art work and location shots, documents, and various remaining artifacts. INot an endorsement of monarchy or revolution, the film is just an interesting look at the occurrance.
7 people found this helpful

Mary B.Reviewed in the United States on January 15, 2019
4.0 out of 5 stars
LEARNED THINGS I DIDN't KNOW
Verified purchase
Dry, but interesting & educational. I never knew or realized why or how The Sun King died. Since I like to continue to learn things, this fit the bill. Was amazed to learn how much written information survived after the destruction that took place during the French Revolution. Would love to know how this was accomplished. A daily record of the king's health, the massive correspondence written by his sister-in-law. Between revolutions & wars I would have thought most of this would have been lost. Just wish it had been a bit less dry in its presentation.
2 people found this helpful
See all reviews
Back to top
Get to Know Us
Make Money with Us
Amazon Payment Products
Let Us Help You
EnglishChoose a language for shopping. United StatesChoose a country/region for shopping.
© 1996-2022, Amazon.com, Inc. or its affiliates