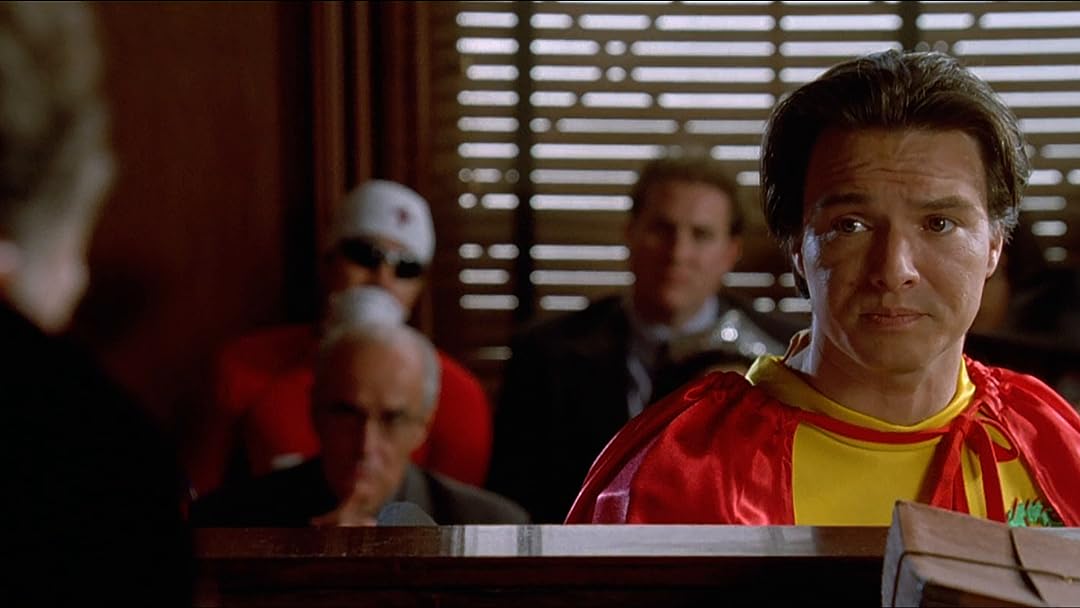 (52)
3.21 h 33 min2009PG
HD. A would-be superhero (with no known powers) leads a group of equally dysfunctional super beings on a mission to stop an evil plot.

Steven DwyerReviewed in the United States on July 1, 2017
5.0 out of 5 stars
Danielle Harris Super heroine in a cape and tights
Verified purchase
I decided to get this because I'm a huge Danielle Harris fan and I liked her ever since she appeared on Rosanne and Halloween 4 and 5 and Don't Tell Mom the Babysitters Dead. I wanted to add it to my Scream Queen collection. It's a funny comical movie and fun. It also shows her comical laughter side. I'm used to seeing her horror and thrillers. If you like to see the pretty Danielle Harris in a cape and tight tights as a hot superheroine this movie is for you.

M. J. ThysellReviewed in the United States on June 1, 2015
1.0 out of 5 stars
Bad, but not so bad it's good. Just bad.
Verified purchase
This movie is bad, and don't just take my word for it: 0% critics score and 13% audience score on Rotten Tomatoes. Super Capers missed the mark for what it was trying to achieve. Ray Griggs wanted to make a campy superhero movie a la 1960s Batman, but with '80s style as an homage to the films he grew up loving, Star Wars, Star Trek, Raiders of the Lost Ark, and Back to the Future. Instead, it feels like a modern lampoon parody movie with homages to classic movies that are so blatant they feel like knock-offs. I wanted and was expecting a cheesy movie, but the cheesy dialogue was cooked too fast on a burner that was too hot. The movie stops way too often to admire it's own work or explain the bad jokes. Delivering good cheese should be done the same as a cool guy with a huge block-buster explosion. Never. Look. Back. Drop the bomb; keep moving forward. Imagine how bad 'Airplane' would have been if after every subtle joke Leslie Nielsen would turn to the camera with a look that says, "How about that one, folks?"

Yeah, this is a safe-for-kids movie, but I can't call it a kids movie. Who is the hero that the kids are supposed to look up to? It's not the main protagonist, Ed Gruberman. He's a schmuck who becomes an accidental con-artist that manages to weasel his way out of bad situations with dumb luck when he realizes he's about to get caught. That's not exactly someone I would want kids aspiring to be. Granted, if Justin Whalin could have delivered this character, then I would have really liked this movie, but remember, I'm a jaded adult. Plus, none of the other cast members truly redeem themselves either. Incompetence prevails is the main theme of the movie, which is not typically the lesson parents want to see in children's entertainment.

Super Capers is an example of "a polished turd is still a turd." This film looks great and it's put together well, but it doesn't cover up the stench of the awful dialogue and acting. The concept and plot are interesting and compelling enough for me to watch. The staging and set designs are very nice. The costumes -- while not so great -- were perfect for the tone of this movie (seriously, I liked them because it was one of the few jokes that worked). The choice of camera angles and scene transitions look professional. The sound effects and music are great. Tom Richmond's art was a great compliment to the story telling and opening credits. The special effects and props are great. It looks and feels like a big Hollywood studio movie. All of this is an impressive feat for a first-time director of an independent film.

Even though Ray Grigg's heart was in the right place, his chops just weren't ready to deliver camp. Aspiring filmmakers of campy movies should watch this as an example of what not to do. AND be sure to watch it with the director's commentary to understand what Ray was trying to do because it was too many conflicting ideas at once. The final joke is that there's not going to be a sequel.

S. TollesonReviewed in the United States on November 21, 2009
5.0 out of 5 stars
This is a kids movie, and the kids loved it!
Verified purchase
This movie we saw for free in the movie theatre with passes given to us at a convention. My wife and I took our two sons (age 6 and 4) at the time, and they absolutely loved it. Guess what, so did the other kids. As a parent it was silly, though not as stupid as say Sponge-Bob, but it was appropriate. There really wasn't anything in the movie that a young child shouldn't see. And no, I don't let my kids watch Transformers or Lord of the Rings at this age. They threw in a little religion in there, but in a non-forceful way, and with no real denomination. It is a movie I can properly say I felt good that my kids watched it.
8 people found this helpful

Glen HubbardReviewed in the United States on December 29, 2010
1.0 out of 5 stars
So bad that its' really bad!
Verified purchase
I saw this movie advertised on another DVD I recently ordered. I am a huge superhero fan, and thought if I could get this cheap; I'd give it a shot. I thought I was lucky when I did get it cheap at Amazon. I wasn't. This movie is HORRIBLE! Though I have wasted enough time merely watching this movie, in the interest of the public good, I decided to spend a little more time here critiquing it with the hope of possibly sparing someone else some viewing agony.

This movie aspires to be like the recent parody movies "Epic Movie" or "Date Movie", only for kids. Those movies stink, but this movie is far far worse a film.

Looking at other reviews, I cannot believe that some people gave this garbage 5 stars. They must be related to someone in the film or have a stake in the profits. Simply saying "It's for kids!" does not excuse the poor writing and direction of this nightmarish catastrophe of a film. There are many low budget kids' films written intelligently that are entertaining. This is not one of them.

What makes me so angry is that the film has a good premise. Someone in a costume stops a mugging and is arrested for using overwhelming force. They assume he is a superhero, so they sentence him to become a member of a super team in training to better learn to use his "powers". So much possibility is there. But every single scene is sluggish, awkward and dull. The mediocre special effects of this film (which are actually not that bad) could have easily been overcome by better writing and direction, but they are NOT. The director should be banned from Hollywood.

The writers' idea of comedy/parody seems to be lifting entire scenes WORD FOR WORD from well known movies, and then re-creating them in this film, only adding the main characters' voice over "Hey, this is familiar! It's from `Return of the Jedi', isn't that funny?" Umm... sorry, no it's not.

I feel sorry for the lead actor of this film. The director apparently told him, "Just say the line with a smile and them mug to the camera, trust me it's funny." and he believed it. It never works, and it is tried over and over and over..... It's like they are constantly letting us in on a joke, THAT IS NOT THERE! ARGH! No matter how many times ne smiles and mugs, delivering a line from a much better film, it's not a joke, and it's never ever EVER funny.

I watched this movie alone to make sure that my 7 year old daughter could watch it. Now I refuse to let her see it because she will think I am a moron for buying this piece of garbage. And yes, I watched the whole film through the credits and was never rewarded by any sign of entertainment. To quote a famous doctor "It's dead, Jim."

PLEASE NOTE: OF ALL THE REVIEWS OF THIS MOVIE ON AMAZON, I AM THE ONLY VERiFIED AMAZON PURCHASE! I doubt some of the others (five stars) even own the movie.
THIS MOVIE IS NOT GOOD FOR KIDS OR ANYONE. AVOID!
3 people found this helpful

Amazon CustomerReviewed in the United States on July 18, 2016
5.0 out of 5 stars
Excellent value
Verified purchase
Excellent service and an excellent value.

Francis BoringReviewed in the United States on September 8, 2012
4.0 out of 5 stars
4.5 out of 5 stars
Verified purchase
4.5 out of 5 stars. Fun Fun Fun Fun Fun. Clean & for the whole family. Play find the homage to your favorite movies & tv series. Also, stick around thru the end of the credits for an additional scene. Thanks, from me, to all the people who allowed them to use your stuff or parody them. Helped make it great. Honestly, I bought the movie because of Danielle, whom I met back in March @ Horror Hound Weekend. She was really sweet so I am slowly buying her stuff. I was expecting a kids movie. However, it turned into more of a movie like FANBOYS for me. Enjoy.

Kindle CustomerReviewed in the United States on May 3, 2015
2.0 out of 5 stars
Two Stars
Verified purchase
Perfect for young children, over the age of ten please leave your brain at the door.
One person found this helpful
See all reviews
Back to top
Get to Know Us
Make Money with Us
Amazon Payment Products
Let Us Help You
EnglishChoose a language for shopping. United StatesChoose a country/region for shopping.
© 1996-2022, Amazon.com, Inc. or its affiliates