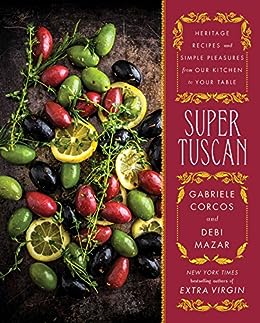 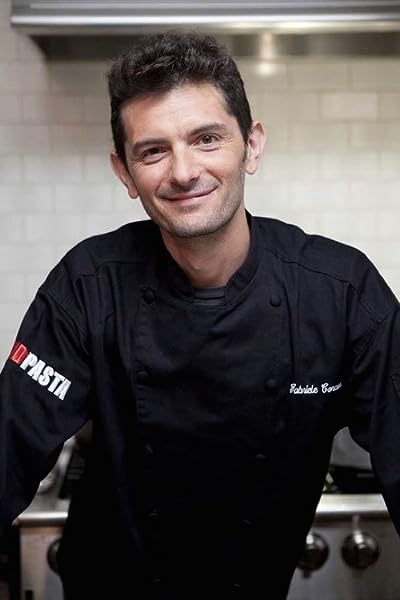 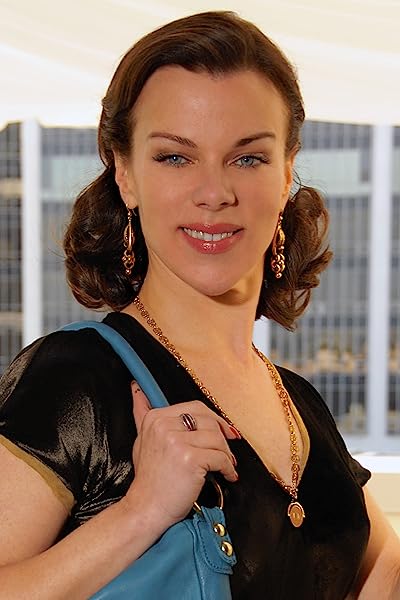 Super Tuscan: Heritage Recipes and Simple Pleasures from Our Kitchen to Your Table Kindle Edition

Enjoy a great reading experience when you buy the Kindle edition of this book. Learn more about Great on Kindle, available in select categories.
From the celebrity/chef husband-wife team and authors of the bestselling Extra Virgin comes a brand-new cookbook with over 100 delicious recipes that incorporate Tuscan flair with classic American dishes.

With five seasons of their Cooking Channel show, Extra Virgin, still repeating regularly and their neighborhood Brooklyn Italian café-slash-supper-club, The Tuscan Gun, thriving in its second year, Debi Mazar and Gabriele Corcos have invited us again into their kitchen to share delicious recipes for the whole family to enjoy.

Good Italian cooking is family cooking. From potato gnocchi with a buttery red sauce just like how Gabriele’s grandmother used to make it, to the Tuscan fried chicken marinated in classic Italian flavors to put a whole new spin on a traditional American recipe, Super Tuscan showcases the best of both cultures, and introduces unique recipes that can only come from a multicultural kitchen.

Along with over 100 tasty recipes, Debi and Gabriele share entertaining anecdotes, useful tips, and day-to-day life in their household with over 125 stunning photographs. Super Tuscan will inspire you to make cooking a daily experience in your family life and live la dolce vita wherever you are.
Read more
Previous page
Next page
Due to its large file size, this book may take longer to download

Gabriele Corcos was raised in a Tuscan olive orchard, on the hills right above Florence. He started cooking at the age of six and has not stopped since. Together they produced and co-hosted Cooking Channel’s Extra Virgin. They live in Brooklyn with their two daughters where they own the restaurant The Tuscan Gun.

Debi Mazar, native New Yorker, made her film debut in Martin Scorsese’s Goodfellas and has since appeared in more than seventy feature films, as well as HBO’s hit series Entourage and TV Land’s new series Younger.

4.7 out of 5 stars
4.7 out of 5
344 global ratings
How are ratings calculated?
To calculate the overall star rating and percentage breakdown by star, we don’t use a simple average. Instead, our system considers things like how recent a review is and if the reviewer bought the item on Amazon. It also analyzes reviews to verify trustworthiness.

Belinda
5.0 out of 5 stars Great, Fun Cookbook
Reviewed in the United States on October 29, 2017
Verified Purchase
Well, it’s just as much fun to cook from this book as it was from their previous cookbook! I managed to cook every single recipe from their previous cookbook and I aim to do so from this cookbook, also. I find the recipes I enjoy prepared so far from this cookbook to be extremely family- friendly (i.e., kids love the food!) and very generous portions that almost always provide leftovers for lunch the next day. This beautifully illustrated book provides a glimpse into their lives, which is accented by their love for good, wholesome food. It’s a pleasure to read as well as cook from these recipes they have shared. Kudos, Gabriele and Debi!
Read more

5.0 out of 5 stars Great, Fun Cookbook
By Belinda on October 29, 2017
Well, it’s just as much fun to cook from this book as it was from their previous cookbook! I managed to cook every single recipe from their previous cookbook and I aim to do so from this cookbook, also. I find the recipes I enjoy prepared so far from this cookbook to be extremely family- friendly (i.e., kids love the food!) and very generous portions that almost always provide leftovers for lunch the next day. This beautifully illustrated book provides a glimpse into their lives, which is accented by their love for good, wholesome food. It’s a pleasure to read as well as cook from these recipes they have shared. Kudos, Gabriele and Debi!
Images in this review

the computer geek
5.0 out of 5 stars Tuscan it is.
Reviewed in the United States on June 25, 2018
Verified Purchase
My first introduction to Debi and Gabriele was a Sunday morning show that I turned to while drinking coffee. I liked their cooking and interactions with the food and started watching the show every week. I finally got on Amazon to look for their books and decided on Super Tuscan as my first choice. The stories are what you would expect if you have listened to their show and I like their way of cooking Italian. I don't have any Italians in my family and I admit I am not a big pasta eater, so this book was great to me because it had other things to cook that were very good to eat that weren't all pasta. The book starts by going over the ingredients that they use on a regular basis and why they recommend them for the recipes in the book as the pair like to buy fresh at the farmer's market. It follows the usual standard cookbook plan by dividing everything by courses and the recipes in each add a comment on what wine they would choose for the dish. There are a lot of color photographs and more personal ones of the couple out buying things from the farmer's market or cooking at home. This is one cookbook that has stayed on the table to be reread again for more recipes.
Read more
15 people found this helpful
Helpful
Report abuse

Gayla Allen
5.0 out of 5 stars Super Tuscan cookbook
Reviewed in the United States on July 23, 2020
Verified Purchase
I love this book. I love every book Gabriele and Debi have published.
Also loved their show Extra Virgin.
The photos in this book are wonderful, recipes easy to read and the ingredients are all easy enough to get.
They just moved back to Florence. I'm looking forward to their new adventures and new book(s)/show(s).
You won't be disappointed if you buy this wonderful cookbook.

Jason
5.0 out of 5 stars Delicious Recipes,stories, friends and family!!
Reviewed in the United States on June 3, 2020
Verified Purchase
I love this cookbook!! Gabriele and Debi Tell a little about their lives and their experiences in Italy and with different foods. His book explains what foods and ingredients are and how they are used. They tell a little about the recipe and where and when they prepare it. Great Italian dishes! I’ve tried many of them. I also have their Extra Virgin cookbook, it’s amazing too! I just miss their show so much😪. Gabriele...It’s time for a new cookbook to come out! Buy it. You’ll love it!
Read more
8 people found this helpful
Helpful
Report abuse

Debora Herman
5.0 out of 5 stars Tuscan Cooking At It’s Best
Reviewed in the United States on October 28, 2017
Verified Purchase
Debi and Gabriele’s Second cookbook is a tribute to their love of family and sharing their simple Tuscan food with the world. My husband and I have been to one of their pop up suppers in Brooklyn, NY and it was outstanding. I love this cookbook for its simple recipes and fantastic flavors. Each recipe is accompanied by a beautiful plated photo. So far I have made the zucchini with wagon wheel pasta, Brie cheese, fantastic and the lentils with buretta. The flavors are outstanding. Happy to add their second cookbook to my collection.
Read more
10 people found this helpful
Helpful
Report abuse

Deborah J. Bovee
5.0 out of 5 stars More, more, more!
Reviewed in the United States on December 9, 2017
Verified Purchase
My grandparents came to America as young adults. That was the early twentieth century. Until Gabriele's book, I haven't known how to create those wonderful dishes. It brings back all the delicious memories. Good Job GC! More, more and more.
Read more
14 people found this helpful
Helpful
Report abuse

jaytarq
3.0 out of 5 stars Mussel .chowder
Reviewed in the United States on January 11, 2018
Verified Purchase
This is visually lovely...simple directions, encouraging.......however, be careful.....I’m not convinced this was proof read. I just made the Mussel Chowder, which calls for 3 Tablespoonfuls of flour. No way!....one is sufficient, or you’ll end up with thick Stodgy. It also needs something more....I’m not quite sure what.....maybe fresh lemon juice. It is good, but needs something else, so it can leap to superb
Read more
17 people found this helpful
Helpful
Report abuse

Amazon Customer
5.0 out of 5 stars Excellent cookbook
Reviewed in the United States on July 4, 2020
Verified Purchase
Live how this book is written. First of all, I am a huge fan of Deb & Gabriele. I find their unpretentious personalities carry over into their recipes. I’ve made several of the recipes - ingredients are easy to find and recipes easy to follow.
Read more
One person found this helpful
Helpful
Report abuse
See all reviews

Ruth S.
5.0 out of 5 stars A beautiful and also practical cookbook! No regrets.
Reviewed in Canada on November 14, 2020
Verified Purchase
I rarely buy cookbooks these days but splurged recently when this went on sale. It is a beautiful book, well-laid out and easy to follow. I love that the recipes are intertwined with Gabriele & Debi’s love story & family. So far I’ve only made the oven-barbecued chicken wings and the carrot & chick pea soup. Both were delicious and my family asked me to make again, and again & again! I highly recommend.
Read more
Report abuse

CSinc
5.0 out of 5 stars Great Recipes
Reviewed in Canada on July 20, 2020
Verified Purchase
Everything I've made from the book has been tasty and easy to prepare. Super value
Read more
Report abuse

Pleasure Cooker
5.0 out of 5 stars Great recipes
Reviewed in the United Kingdom on December 29, 2017
Verified Purchase
Lovely book. I am delighted to have it.
Read more
Report abuse
See all reviews