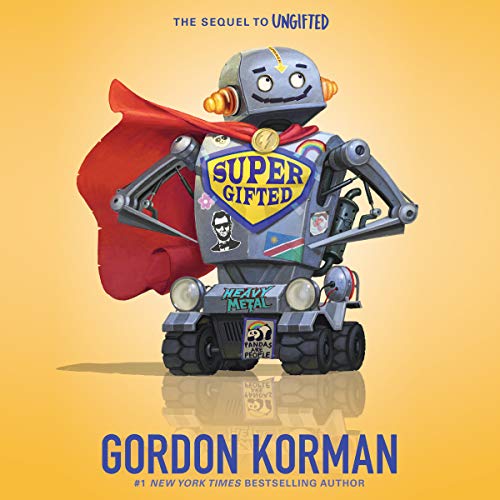 Donovan Curtis has never been what anyone would call "gifted". But his genius friend Noah Youkilis is actually supergifted, with one of the highest IQs around. After years at the Academy for Scholastic Distinction, all Noah dreams of is the opportunity to fail if he wants to. And he's landed in the perfect place to do it - Donovan's school.

Almost immediately, Noah finds himself on the wrong side of cheerleading captain Megan Mercury and alpha jock Hash "Hashtag" Taggart. Sticking up for Noah lands Donovan in the middle of a huge feud with Hashtag. He's told to stay away from the sports star - or else.

That should be the end of it, but when a freak incident suddenly makes Donovan a hero, he can't tell anyone about it since Hashtag is involved. So Noah steps in and becomes "Superkid". Now he's gone from nerd to titan at school. And it may have gone more than a little bit to his head.

This funny and heartwarming sequel to Ungifted, which has become a word-of-mouth hit, cleverly sends up our ideas about intelligence, heroism, and popularity.

Amazon Customer
5.0 out of 5 stars Holds my kids attention!
Reviewed in the United States on February 18, 2021
It's the book we were looking for, no complaints! My son is very "gamer" and it's difficult to get him into books, I read him ungifted first and So this was was an obvious next pick.
Images in this review

Diane in CA
5.0 out of 5 stars Love this book!!!
Reviewed in the United States 🇺🇸 on May 23, 2022
Verified Purchase
Super gifted and ungifted are both amazing books but super gifted is by far the best one of the two I very highly recommend you read the first one first, or else it doesn’t make sense but reading both is defiantly worth it. Over all I believe that everyone should read this book it is funny, serious, and addictive at the same time. So you should most certainly read this book. It was a very fun book!
Read more
One person found this helpful
Helpful
Report abuse

hnash
5.0 out of 5 stars Very Good!
Reviewed in the United States 🇺🇸 on April 24, 2022
Verified Purchase
I would recommend this book to anyone! It's a amazing book and the original is all so very good! I don't regret buying it!
Read more
One person found this helpful
Helpful
Report abuse

Amazon Customer
2.0 out of 5 stars Not great
Reviewed in the United States 🇺🇸 on April 1, 2021
Verified Purchase
It pains me to say this, but this book was pretty bad. Normally Korman's books are great. Ungifted, the Slacker series, and Unplugged are some examples. But this one was just annoying. Reading Korman's book Restart was like this for me, in the sense that it made me straight up hate some of the characters. In this one I really hated Noah Youkillis for taking credit for Donovan's act of heroisim, and that's a bad thing because Noah is an interesting and funny character and you can end up ignoring that when you think about his faults. Also, Donovan's family were very unlikable in this book. I mean how would you feel if your sister told your newborn neice that your friend (who stole credit from you) was her favorite uncle and then been told by your father that he couldn't belive that you (I can't put italics in kindle reviews but the "you" should be italicized as in "you of all people" or "I can't belive someone as good as the Superkid would hang out with someone as bad as you) were friends with the Superkid? I would feel pretty darn bad. And yes, I understand that Noah's intentions were good, but by the end, he started to get a swelled head and became friends with a bunch of people that he wouldn't have been friends with otherwise. And then, when Donovan was finally recognized as the Superkid, no one wanted to be friends with him! Overall, this book just made me mad and that is not a good quality in a book. I really hope that Mr. Korman continues this series but without all of the injust and angering things, because as I said there are some great characters in this series.
Read more
3 people found this helpful
Helpful
Report abuse

Jessica Perry
4.0 out of 5 stars ok you need to make another gifted book
Reviewed in the United States 🇺🇸 on February 5, 2021
Verified Purchase
i love these two... books and i have read the slacker series but you need to stick to these books and slacker prferlibay these because these books are soo good and i want to know what happens next and i love donavan he is a like me but not the beating stuff and breaking thing but i do do and not think sometimes plus i wanna see him and chole say they like eachother. please email me gordon about another one at barnesbperry@gmail.com
Read more
Helpful
Report abuse

bowmanc
5.0 out of 5 stars A Homerun!
Reviewed in the United States 🇺🇸 on March 25, 2018
Verified Purchase
In this sequel to "Ungifted," Donovan finds himself back at Hardcastle Middle School. But this time, Noah Youkilis, owner of the district's highest IQ, is also at Hardcastle. Noah is brilliant -- but has no common sense or physical abilities. Noah's view of how the real world works has come through a rather random look at YouTube.

Donovan appoints himself Noah's protector, but circumstances seem to continually work against Donovan. When Donovan is (again) in the wrong place at the right time, his world is flipped upsidedown. And Donovan thinks there isn't anything he can do about it. Donovan seems doomed to live out his life moving from one disaster to another. Is there anything to be done?

I loved this book. Gordon Korman gets into the middle school boy mind better than any author out there. Donovan a typical middle school boy in that he moves from incident to incident with no thought -- he spends his life reacting. I will be recommending this book a lot!

Kindle Customer
5.0 out of 5 stars Excellent sequel
Reviewed in the United States 🇺🇸 on June 29, 2021
Verified Purchase
I enjoyed this one just as much as Ungifted. Thanks to the author for making the world seem more normal and safe in these tumultuous times. A relaxing, funny, human story even if High school is 35 years behind you.
Read more
Helpful
Report abuse

Richard Costello
5.0 out of 5 stars An Absolute unit of amazing ness
Reviewed in the United States 🇺🇸 on May 8, 2020
Verified Purchase
After reading the first book in the Ungifted Book Universe, I could not get enough of his writing. He perfectly illustrates the minds of characters in the life of a boy with a lack of impulse control. It is an perfect sequel to the original books story. The book shows that you don't have to be a superhero to do super things. It doesn't take a perfect person to be super. And you don't have to be gifted to understand that.
Read more
One person found this helpful
Helpful
Report abuse

Jamie and Heather Hejduk
VINE VOICE
5.0 out of 5 stars A fun and funny book
Reviewed in the United States 🇺🇸 on January 12, 2019
Verified Purchase
Supergifted picks up right where Ungifted leaves off, with Noah getting kicked out of the Academy and having to go to “regular” school with Donovan. The character development, especially of Noah, is fabulous. The way things are phrased is often very funny. My 10- and 12-year-old boys absolutely loved the book (and I enjoyed it, too). I highly recommend it to middle grade age kids. It makes a great family read-aloud, too!
Read more
One person found this helpful
Helpful
Report abuse
See all reviews

jules
5.0 out of 5 stars Great story
Reviewed in Canada 🇨🇦 on October 13, 2022
Verified Purchase
My son (11 years old) and I loved this book! We are almost done the second book of the series now!
Read more
Report abuse

Izzy
5.0 out of 5 stars The plot.
Reviewed in Canada 🇨🇦 on June 5, 2020
Verified Purchase
My 9-year-old loved this book! He got this one just one day before Ungifted; he insisted starting the book instead of waiting for the delivery of Ungifted. So he finished it in one day, then he got Ungifted the very next day! Now he claims Gordon Korman is his fav author! Thanks Gordon!
Read more
Report abuse

Jeff Terrell
4.0 out of 5 stars A great compliment to the first book!
Reviewed in Canada 🇨🇦 on February 19, 2019
Verified Purchase
If you haven't read Ungifted, go there first; this book will be even more fun for you knowing the history of the characters. Buy both books and sit back to enjoy a fun feel good story.
Read more
One person found this helpful
Report abuse

Ahmed ATTAR
5.0 out of 5 stars Definitely worth it!
Reviewed in Canada 🇨🇦 on August 4, 2019
Verified Purchase
This book is great, very fun to read for kids and super cool
Read more
Report abuse
See all reviews