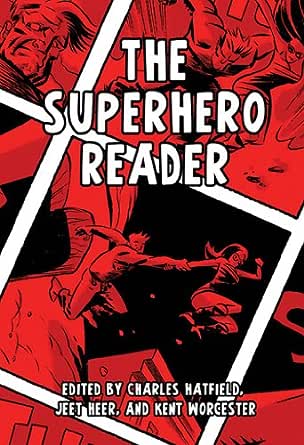 Flip to back Flip to front
Audible Sample Playing... Paused   You are listening to a sample of the Audible narration for this Kindle book.
Learn more
ISBN-13: 978-1617038068
ISBN-10: 1617038067
Why is ISBN important?
ISBN
This bar-code number lets you verify that you're getting exactly the right version or edition of a book. The 13-digit and 10-digit formats both work.

While superhero comics are a distinct and sometimes disdained branch of comics creation, they are integral to the development of the North American comic book and the history of the medium. For the past half-century they have also been the one overwhelmingly dominant market genre. The sheer volume of superhero comics that have been published over the years is staggering. Major superhero universes constitute one of the most expansive storytelling canvases ever fashioned. Moreover, characters inhabiting these fictional universes are immensely influential, having achieved iconic recognition around the globe. Their images and adventures have shaped many other media, such as film, videogames, and even prose fiction.The primary aim of this reader is twofold: first, to collect in a single volume a sampling of the most sophisticated commentary on superheroes, and second, to bring into sharper focus the ways in which superheroes connect with larger social, cultural, literary, aesthetic, and historical themes that are of interest to a great many readers both in the academy and beyond.
Read more

"A Borrowed Life: A Novel" by Kerry Anne King
From the Amazon Charts bestselling author of Whisper Me This comes an emotional and sharply witty novel about how life’s unexpected detours can ultimately bring you home. | Learn more

"The introduction provides a superb analysis (and diagnosis) of the current state of the field, while the anthology itself gathers some of the most influential and intelligent critical writing on superhero comics into one place. The Superhero Reader is an essential volume for any comics scholar."

--Ben Saunders, author of Do the Gods Wear Capes? Spirituality, Fantasy, and Superheroes

The introduction provides a superb analysis (and diagnosis) of the current state of the field, while the anthology itself gathers some of the most influential and intelligent critical writing on superhero comics into one place. The Superhero Reader is an essential volume for any comics scholar. (Ben Saunders, author of Do the Gods Wear Capes? Spirituality, Fantasy, and Superheroes) --This text refers to an alternate kindle_edition edition.

A full exploration of the history, politics, and aesthetics of the superhero genre --This text refers to an alternate kindle_edition edition.

Scott Slemmons
4.0 out of 5 stars Superhero Scholarship
Reviewed in the United States on March 15, 2021
Verified Purchase
"What's a reader? You mean someone who reads about superheroes?"

Well, no, not really. A reader is basically a collection of short articles, often written from an academic or scholarly viewpoint, that detail a broad selection of information, history, theories, and research on a specific topic. The audience for these are generally professors, students, or dedicated fans of the topic — they’re rarely of much interest to the general public.

So this one is, obviously, a reader about superheroes. And you’ll note it isn’t a reader about comics. Comic book history is obviously a big chunk of anything having to do with superheroes, but this is a book about guys and gals in capes and spandex — not underground comix.

The book is divided into three major sections, with eight essays in each. The first is “Historical Considerations,” followed by “Theory and Genre” and “Culture and Identity.”

The historical section is probably the most straightforward, as it focuses on the history of the superhero. Some of these essays detail the proto-superheroes who came before Superman’s debut in 1938, the early lives of Jerry Siegel and Joe Shuster, the creation of Wonder Woman, and the first comics fanzines. But what really makes this section interesting is the inclusion of historical documents, including an excerpt from Philip Wylie’s novel “Gladiator,” which influenced the creation of the Man of Steel, and a chapter from Dr. Fredric Wertham’s discredited “Seduction of the Innocent,” which nearly killed off the comic book entirely in the 1950s.

The “Theory and Genre” section seems like the most complex, with dueling essays from the 1970s to the present hashing out the borders of the superhero genre and the relevant tropes from the Golden Age to the Dark Age and beyond, as well as thick discussions of Jack Kirby’s contributions to the Marvel style of storytelling, the concepts of the multiverse as addressed by different comics creators, and the iconic use of cities as superhero settings.

And finally, the “Culture and Identity” section addresses the impact superheroes have had on Western culture and how they’ve been adopted and adapted by marginalized groups. We get essays about Batman and camp, the Invisible Girl as Marvel’s first important superheroine, superheroes of color at Marvel, DC, and Milestone, and even an essay by Gloria Steinem on Wonder Woman’s influence on feminism.

This definitely isn’t going to be for every reader. It’s a thick book full of academic-level discussions of complex topics. If you’re not up for serious scholarship on comics history, sociology, theory, and more, you might want to give this a pass.

But honestly, for most of us who are serious fans of comics and superheroes, this is fun (though sometimes difficult) reading. It’s a great place to get some historical documents that are hard to come by nowadays. It’s a great way to immerse yourself in serious comics theory in a way you just can’t get arguing with fans at the comics shop. And it’s a great way to expose yourself to new viewpoints that can challenge the way you view superheroes.

The essays are sometimes a mixed bag — some researchers argue for views that are now considered dated, particularly in the “Theory and Genre” section. Scholars in the ’70s generally felt that superhero stories were no different from Westerns, science fiction, or cop dramas — simple tales for children, never real literature. And of course, Fredric Wertham’s essay is full of rhetorical acrobatics designed to tar all comics as poisonous to children. But it is important to see the full scope of comics history and theory, to see where we came from and where scholarship needs to evolve further.

Again, if you can handle a lot of challenging reading (and a bit of a high sticker price), this is going to be a rewarding book for any fan of comics and superheroes. Go pick it up!

Grant Fields
5.0 out of 5 stars Had to read for class
Reviewed in the United States on October 19, 2021
Verified Purchase
Very dry literary analysis book. I had to read it for class. But book was bound well and good quality. Just a boring read.
Read more
Helpful
Report abuse

David G. Nichols
4.0 out of 5 stars Academic/scholarly discussion of superheroes
Reviewed in the United States on March 7, 2018
Verified Purchase
This is a collection of acdemic articles in the field of Superhero Studies (a field I'm glad I didn't know about when I was attending college, as I would have gotten an even less useful degree than the one I have). How interesting individual articles are will depend on the reader, but there's something here for any comics enthusiast.
Read more
One person found this helpful
Helpful
Report abuse