You've subscribed to Superman (2016-2018)! We will preorder your items within 24 hours of when they become available. When new books are released, we'll charge your default payment method for the lowest price available during the pre-order period.
Update your device or payment method, cancel individual pre-orders or your subscription at
Your Memberships & Subscriptions
There was an error. We were unable to process your subscription due to an error. Please refresh and try again. 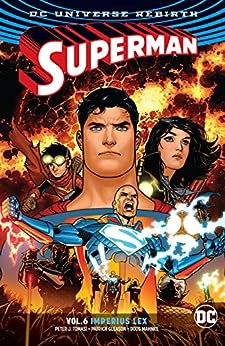 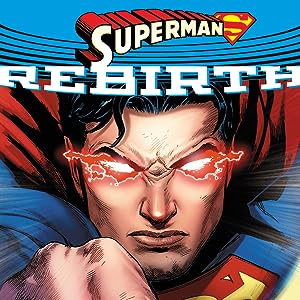 “The Kirby influence is palpable.” --Comicosity

"Peter Tomasi and Patrick Gleason seem to be creating something special with this book." --Nerdist

"A series that's worn its heart on its sleeve and made you fall in love with this version of the Superman Family." --IGN --This text refers to the paperback edition.

Peter J. Tomasi is a New York Times best-selling author known for his current work on Superman and previous projects Batman and Robin, Superman/Wonder Woman, Batman - Detective Comics, and Batman Arkham Knight, along with other commercially successful books including Green Lantern Corps, Brightest Day, Emerald Warriors, and Nightwing. Over the course of his career with DC Comics—more than two decades of hit books—Peter served as a group editor ushering in new eras for Batman, Green Lantern, and JSA along with special projects like Kingdom Come. Peter also is the author of the creator owned books Light Brigade (Dark Horse) with artist Peter Snejbjerg, The Mighty (Dark Horse) with Keith Champagne and artists Peter Snejbjerg and Chris Samnee, and the critically acclaimed horror/drama series House of Penance (Dark Horse) with artist Ian Bertram.

Patrick Gleason loves to create fantastic characters and worlds. His focus on character development and powerful storytelling can be seen in DC’s Batman and Robin, Green Lantern Corps, Aquaman, JLA, Hawkman, and JSA. His ground-laying work alongside Geoff Johns and Dave Gibbons on the miniseries Green Lantern Corps: Recharge made way for the acclaimed ongoing series. The Sinestro Corps War followed, and then the explosive Blackest Night with Peter J. Tomasi. As part of the DC Comics New 52, Patrick lent his artistic vision to the Dynamic Duo of Batman and Robin. Patrick is currently writing and penciling Robin: Son of Batman. --This text refers to the paperback edition.

4.6 out of 5 stars
4.6 out of 5
73 global ratings
How are ratings calculated?
To calculate the overall star rating and percentage breakdown by star, we don’t use a simple average. Instead, our system considers things like how recent a review is and if the reviewer bought the item on Amazon. It also analyzes reviews to verify trustworthiness.
Top reviews

Hillary Bogus
5.0 out of 5 stars Must read
Reviewed in the United States on February 6, 2019
Verified Purchase
I highly recommend reading this volume. The main story arc was really good. The action was really good. It was fun seeing all three of the Kent’s having to survive solo and reunite on Apokolypse. I liked the Lex storyline because it seems to be setting him up for a return to his villainous roots.
Read more
One person found this helpful
Helpful
Report abuse

Yusuf Kudsi
3.0 out of 5 stars Three Stars
Reviewed in the United States on August 28, 2018
Verified Purchase
Maybe one of the weakest in the run
Read more
One person found this helpful
Helpful
Report abuse

Lamp68
5.0 out of 5 stars Lois Lane the knight avenger
Reviewed in the United States on May 20, 2019
Verified Purchase
Cosmic story of the feud that rocks the galaxies: lex luthor vs. superman
Read more
Helpful
Report abuse

Elizabeth
5.0 out of 5 stars He loved it 😁
Reviewed in the United States on January 15, 2019
Verified Purchase
My nephew already finished reading it 👍
Read more
Helpful
Report abuse

Amazon Customer
5.0 out of 5 stars the comics are great
Reviewed in the United States on December 17, 2018
Verified Purchase
i love it
Read more
Helpful
Report abuse

Imperius Lex (33-36): Lex is taken back to Apokolips with them wanting him to become their new leader in the wake of Darkseid's death. He calls for Superman to help without providing details for his summons. When Superman goes on a family night instead, Lex sends a Boom Tube that brings the entire Super family to Apokolips. There's some really cool and fun stuff for Lois and Jon plus we get to see the long overdue falling out between Superman and Lex. There are a few holes in the logic of character actions and the way the leadership vacuum in Apokolips is addressed is a bit of a cop-out. Still, fairly fun.

Good Night Moon (39): Superman takes kids with cancer to the Justice League Watchtower. It's a sweet, funny, and touching story. Not a whole lot of action, but a lot of heart. Charming.

The Last Days (40 and 41): Guest written by James Robinson. This story finds an all-too cheerful Jon showing up at the Fortress of Solitude to commemorate the day Krypton exploded, when an alarm goes off that Superman created to warn them when a planet's about to explode. Superman and Jon go to save the planet, but they don't want saved because they believe it's the will of their god for them to perish.

The art in this story is fantastic. The colors are great and both space and the alien world come to live. The story, on the other hand, is hot garbage. The dialogue between Jon and Clark in the Fortress is stilted. Superman acts incredibly out of character in a way that ultimately leads the planet's inhabitants to turn on him so that Superman meets another character. It's an attempt to go after an aspect of belief and faith in a ham-fisted way, and the conclusion reached about religion is weak and uninteresting.

It's hard to believe Robinson is the same guy who wrote Starman. This story is easily the worst Superman story that I've read since DC Rebirth and overall, it gives the book a mediocre feel