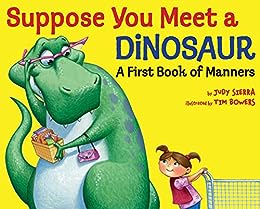 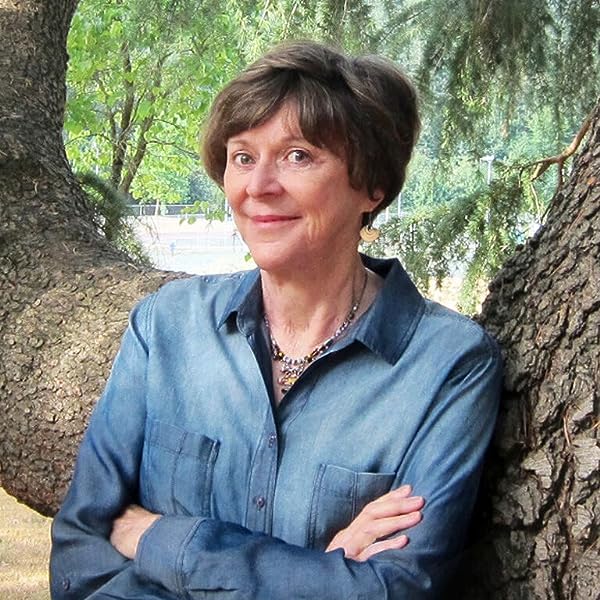 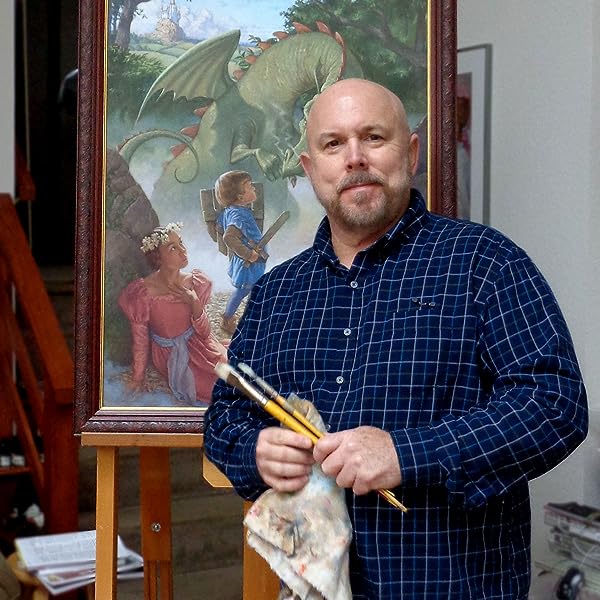 Suppose You Meet a Dinosaur: A First Book of Manners Kindle Edition

Sierra and Bowers team up for a slightly different take on the dinosaurs plus manners theme that has been well covered by the How Do Dinosaurs... series. There's no bad behavior on display in this outing: when a small girl meets a T-Rex who's shopping at the grocery store, the girl models the polite way to interact with others, even in unexpected circumstances. "Your shopping cart begins to spin./ It dings the dino on the shin./ She roars a terrifying roar./ What do you tell the dinosaur?" The correct responses to this and other scenarios appear in large speech bubbles. There's lots of physical comedy on display in Bowers's acrylic paintings--the dinosaur drives away in a tiny pink car better suited for Barbie--which, along with Sierra's characteristically sturdy verse, helps the gentle message about manners go down smoothly. --Publishers Weekly

Judy Sierra is the author of over 30 picture books for children. Her books have won top accolades including:

Before she began publishing books for children, Ms Sierra worked as a children's librarian, a puppeteer, a storyteller, and taught university courses in folklore and children's literature. She lives in Portland, Oregon.

Judy Sierra is the author of over 30 picture books for children. Her books have won top accolades including:

Before she began publishing books for children, Ms Sierra worked as a children's librarian, a puppeteer, a storyteller, and taught university courses in folklore and children's literature. She lives in Portland, Oregon.
Read more

4.8 out of 5 stars
4.8 out of 5
152 global ratings
How are ratings calculated?
To calculate the overall star rating and percentage breakdown by star, we don’t use a simple average. Instead, our system considers things like how recent a review is and if the reviewer bought the item on Amazon. It also analyzes reviews to verify trustworthiness.

Wayne Cash
5.0 out of 5 stars Manners are fun~!
Reviewed in the United States on August 16, 2017
Verified Purchase
I admit that I am a fan of artist Tim Bowers, and this is what drew me (no pun) to the book.But after reading it, I enjoyed the cute, rhyming story, about learning manners.
Great staging and page layout, it puts the reader into the action up close sometimes.This is the kind of book that is perfect to read with your little one, as there are lots of moments to stop and talk about the lessons and the images.
Besides, there's a dinosaur.... So you can't really can't go wrong. (^_^)
Read more
One person found this helpful
Helpful
Report abuse

Tori Thomas
5.0 out of 5 stars 18mo old approved
Reviewed in the United States on September 6, 2019
Verified Purchase
My 18mo old loves this book. And the rhyming story line is just adorable.
Read more

5.0 out of 5 stars 18mo old approved
By Tori Thomas on September 6, 2019
My 18mo old loves this book. And the rhyming story line is just adorable.
Images in this review

Lyone Conner
5.0 out of 5 stars Such a fun read!
Reviewed in the United States on December 28, 2019
Verified Purchase
My six-year-old and ten-year-old still love reading this book! I bought it when they were six and three, but every once in a while I pull it out, and they like to take turns predicting what the correct response is for the interactions with the dinosaur. I love this book so much that I bought it for a girlfriend who has toddler children. The print is big and easy to read, and it really is such a sweet book.
Read more
Helpful
Report abuse

T. Durden
5.0 out of 5 stars An Instant Classic in Our House
Reviewed in the United States on May 9, 2018
Verified Purchase
Grandma got this book from the library with our son and after reading it once I thought "this is a book every child should have." And I intend to get it for our friends who are having/have kids. So, of course I purchased one for our household too. It's the perfect length (somewhat short), it's fun and interactive (my son finishes a lot of the sentences) and it teaches/reinforces kids being very polite and engaged with "dinosaurs" in public.
Read more
Helpful
Report abuse

Jules
5.0 out of 5 stars Great book for toddlers
Reviewed in the United States on May 18, 2020
Verified Purchase
This book is a great intro to manners for my 2.5 year old and he loves dinosaurs. The illustrations are really colorful and nicely done too!
Read more
Helpful
Report abuse

Dana P.
5.0 out of 5 stars WILD ABOUT THIS AUTHOR!
Reviewed in the United States on May 1, 2019
Verified Purchase
My 23 month old son is obsessed with Wild About Books from the same author so adding this to our bedtime routine was a no brainer! After a few nights, I noticed him saying things like “please please” and “no thank you” so that’s a bonus!
Read more
Helpful
Report abuse

Kelly Wynn
4.0 out of 5 stars cute!
Reviewed in the United States on September 18, 2020
Verified Purchase
cute storybook, a little awkward to hold as its long and thin.
Read more
Helpful
Report abuse

Angela Wong
5.0 out of 5 stars Adorable dinosaur book
Reviewed in Canada on October 31, 2018
Verified Purchase
The book was adorable. The cute storytelling to teach manners and the illustrations make this a fantastic book, especially for dinosaur loving kids. My 2 year delights in having us read this over and over. We would remind him of the manners we learnt from the dinosaur and he would try to say thank you and please now

Jessica
5.0 out of 5 stars Awesome
Reviewed in Canada on February 4, 2019
Verified Purchase
A good story for teaching manners in a fun rhyming way. The dinosaur part makes my son want to read it.
Read more
Report abuse