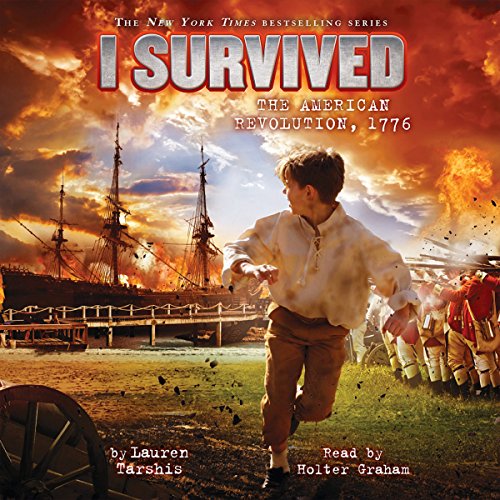 I Survived the American Revolution, 1776: I Survived, Book 15

The battlefield was soaked in blood. Screams of injured soldiers rang through the air. Eleven-year-old Nathaniel Knox knelt behind a rock, his gun clutched in his shaking hands. Nate had been heading to New York City to find his father. But now he was trapped in a terrible gunfight between American and British troops.

This Revolutionary War had started as a thrilling fight for freedom. The 13 American colonies were breaking apart from England, away from King George III. The colonies would band together to become a brand-new country: The United States of America!

But King George was like a snake with America gripped in his fangs - and he didn't want to let go. So now it was war - brutal, bloody war. And America was being crushed by the mighty British army. Thousands of American troops were either dead or dying in filthy British prison ships. General George Washington's army was in tatters.

All Nate wanted was to find his father...and to get out of here alive.

Your audiobook is waiting!
Learn more about Membership
By completing your purchase, you agree to Audible’s Conditions Of Use
Sold and delivered by Audible, an Amazon company

S.A.Johnson
5.0 out of 5 stars Great Historic Fiction
Reviewed in the United States on May 15, 2019
Verified Purchase
My 9 year old has read several books in the series and really enjoyed them, so I decided to purchase this one for our home school studies on the American Revolution. This book is truly praiseworthy! There were so many details included from the time period; it gave us many historic ideas to discuss. The storyline truly grabs the attention, and the author's viewpoint is neither too liberal, nor too conservative, yet very patriotic. I will be purchasing the Gettysburg book for our Civil War unit.
Read more
5 people found this helpful
Helpful
Report abuse

RR
5.0 out of 5 stars Buy! You’ll thank me!
Reviewed in the United States on September 14, 2019
Verified Purchase
Bought some and after reading first couple with my 6-7 year old we ordered everyone from the series. Such a great read for young children. Really fun and enjoyable but about true events. Great history lesson and makes learning fun. My son couldn’t wait to start the next one. Highly recommend for any young reader. If you’re not sure about it I’m telling you that you’ll
Thank me after you read the first one. They are all fantastic!
Read more
One person found this helpful
Helpful
Report abuse

M. Johnson
5.0 out of 5 stars My boys can’t put it down!
Reviewed in the United States on June 15, 2020
Verified Purchase
My 3 boys(12,10,8) adore the I survived series. This book arrived and they all read it within a few days. It’s super appropriate for young readers, give a glimpse into history, and is action a packed!
Read more
One person found this helpful
Helpful
Report abuse

davis.g105
5.0 out of 5 stars Enjoyable
Reviewed in the United States on October 6, 2020
Verified Purchase
Great book to teach young readers about the American Revolution and grow their interest in both history and reading at the same time.
Read more
One person found this helpful
Helpful
Report abuse

Anniew
5.0 out of 5 stars Good historical fiction
Reviewed in the United States on January 28, 2020
Verified Purchase
These books provide a good feel for the event and give insight to children on the context of an event they've heard of.
Read more
One person found this helpful
Helpful
Report abuse

Fire wife
5.0 out of 5 stars Learn history and enjoy a good story
Reviewed in the United States on November 19, 2017
Verified Purchase
My son is a history lover! He loves this series. He learns about history and enjoys a great story. He started reading these in late 2nd grade. He has always been a strong reader. He is currently in 6th Grade and still enjoys this series.
Read more
2 people found this helpful
Helpful
Report abuse

JuliaP
5.0 out of 5 stars Great little read.
Reviewed in the United States on December 1, 2018
Verified Purchase
These are awesome books. My daughter's 14 and does not LOVE to read. But she read several of these "I Survived" books when she was younger and they're her favorite. They're short enough and exciting enough that she Will sit and read...which is great!!
Read more
Helpful
Report abuse
See all reviews

Amazon Customer
5.0 out of 5 stars FAVOLOSO! Fabulous! Recensione di un'alunna italiana
Reviewed in Italy on February 22, 2022
Verified Purchase
I'm from Italy and I'm twelve years old. My english teacher told me to read this book and it was just wonderful. I read this book a few times and I thought it was more interesting each time. I like history at school but this book teaches history in a more interesting way. It is more a travel machine than a book because it brings you in the story. I even learned about the famous Yankee Doodle Dandy so I close thanking the author with a line from the song: Keep it up!
Read more
Report abuse

Annette Wong
5.0 out of 5 stars Great story
Reviewed in Canada on June 19, 2020
Verified Purchase
My boys love the book, they have been reading it for couple of times. Looking forward for the new books.
Read more
Report abuse

SS
5.0 out of 5 stars Nice book for history lovers
Reviewed in Canada on November 29, 2020
Verified Purchase
My son is interested in history and he liked the book very much!!
Read more
Report abuse

Amazon Customer
5.0 out of 5 stars Well Written.
Reviewed in Canada on June 1, 2019
Verified Purchase
I love disaster movies as long as they don't happen where I live. I really enjoyed this book series.
Read more
Report abuse