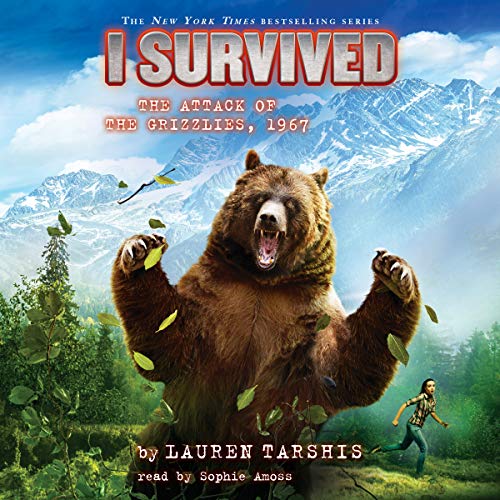 Since the opening of Glacier National Park in 1910, there were no reported fatal bear attacks until one summer night in 1967, when two grizzlies attacked campers and killed two young women.

Inspired by the dramatic and tragic story of that night, and how it eventually influenced the fate of the grizzly bear in the continental United States, Lauren Tarshis has crafted yet another gripping novel in the I Survived series that is sure to shine a light on a terrifying and mostly unknown moment in US history.

4.8 out of 5 stars
4.8 out of 5
2,516 global ratings
How are ratings calculated?
To calculate the overall star rating and percentage breakdown by star, we don’t use a simple average. Instead, our system considers things like how recent a review is and if the reviewer bought the item on Amazon. It also analyzes reviews to verify trustworthiness.

Gingerbread
HALL OF FAME
5.0 out of 5 stars SUCH a cute story!!!
Reviewed in the United States on September 25, 2018
Verified Purchase
This book popped up on a recently released list for me, and I ended up buying it on a whim. I don't have kids in this age range, but my nephew reads anything he can get his hands on, so I'm constantly looking out for books for him. He's really sensitive and impressionable though, so I usually get the kindle versions and read them myself before I get the paperbacks for him.

And honestly, this story was just perfect. It was part mystery part thriller, with a good moral, and a sweet ending. Even I got chills in a couple of places, lol! No exaggeration. This was one of my favorites:

"And that's when she noticed something strange...the total silence. The owls had stopped hooting. The night bugs weren't buzzing. The whole forest seemed to be holding its breath.
And then Mel heard a twig snap. Leaves rustling. Deep, wheezing breaths.
The hairs on Mel's arms stood straight up.
She wasn't alone. Something was here.
Something big."

I actually didn't get my nephew this paperback. I think he's going to love the author enough I took a chance and ordered the first 3 books in this series!!! :)
Read more
11 people found this helpful
Helpful
Report abuse

moonhunt18
5.0 out of 5 stars Awesome for all Ages!
Reviewed in the United States on June 25, 2020
Verified Purchase
My 9 yo daughter has loved the I Survived series for a few years now. Truth be told, I do too.

The stories are always about a kid (usually 11yo) who lives through historical disasters, and we learn about those disasters through his/her eyes.

The tales are well-written and include facts- as well as historical fiction to hold the audience’s attention.

They are exciting and sad; gripping and profound; tragic and heartwarming. You can always count on the main kid-character surviving...but not always the other people in the story.

Your child and you will certainly come away with the intended morals:
*War is Hell. (D day, Pearl Harbor, Gettysburg, American Revolution, Civil War etc)
*People can be evil: (Hitler, 9/11, maybe in a few years, Trump will be a subject of one of her books)
*The newest inventions aren’t always the best: (Titanic, Hindenburg)
Don’t turn your back on nature: (Tsunamis, tornadoes, hurricanes, earthquakes, volcanoes, fires, floods)
Animals are wild; don’t turn your back on them either:: (sharks, grizzlies)
And molasses is...well. We are reading that one next.

PPete
5.0 out of 5 stars Awesome series!
Reviewed in the United States on September 11, 2019
Verified Purchase
My granddaughter loves these and she reads them out loud to me! I enjoy the story as much as she does! The history line is right on, just adding a character to survive and pass on the story. I liked the attack of the Grizzly but my granddaughter loves the American history selection! We’re reading Pearl Harbor now!
A reluctant reader would enjoy these!
Read more
7 people found this helpful
Helpful
Report abuse

RR
5.0 out of 5 stars Buy! You’ll thank me.
Reviewed in the United States on September 14, 2019
Verified Purchase
Bought some and after reading first couple with my 6-7 year old we ordered everyone from the series. Such a great read for young children. Really fun and enjoyable but about true events. Great history lesson and makes learning fun. My son couldn’t wait to start the next one. Highly recommend for any young reader. If you’re not sure about it I’m telling you that you’ll
Thank me after you read the first one. They are all fantastic!
Read more
5 people found this helpful
Helpful
Report abuse

Hen
1.0 out of 5 stars My Son's Review:
Reviewed in the United States on October 5, 2018
Verified Purchase
"Not NEARLY as good as the last ones, Mom. It was TERRIBLE."

He should know, he's read all of them.

My take on it: Wolverines HAVE picked fights with Grizzlies. AND WON. Grandpa is full of it.

Lauren Tarshis said, "She read at least twenty different books, watched videos and studied photographs and maps." I guess wolverines were in none of them.

Also, they ARE bloodthirsty beasts. They eat whatever comes across their path, including people. Including those poor women this book is based on who were attacked WHILE SLEEPING. If THAT'S not bloodthirsty, she and I have ENTIRELY different takes on what that word means.

I've not read the book, myself, but just these two inaccuracies make me wonder what else is incorrect....
Read more
6 people found this helpful
Helpful
Report abuse

birdschirping
5.0 out of 5 stars Great series
Reviewed in the United States on October 7, 2018
Verified Purchase
For any who think these might be too scary - the series has helped my 10-year old conquerr some anxieties, especially about natural disasters. He has been reading these since he was eight.
Read more
9 people found this helpful
Helpful
Report abuse

Misathin
5.0 out of 5 stars Excellent books
Reviewed in the United States on April 7, 2021
Got for: 8 years oldDifficulty level: ModerateVerified Purchase
One of my favorites in the series. Not only have my kids loved these books but I do as well. The author is a fantastic writer who gets character depth, action and history into so few pages. I haven't been able to put her books down and neither can my kids!
Read more
2 people found this helpful
Helpful
Report abuse

Bob
4.0 out of 5 stars Ummm.... It's nice I guess.
Reviewed in the United States on December 18, 2018
Verified Purchase
Weeeeeeeel...... Let's just say it's not as good as the other books in the series. One thing I noticed was that Grandpa is wrong. Wolverines actually do win fights sometimes; and it says pacificy, in the book, that Lauren Tarshis researched all the information. Well, I guess she didn't read any books about Wolverines! Besides the bad information,this was a decent book. I like Lauren Tarshis.
Read more
5 people found this helpful
Helpful
Report abuse
See all reviews

Amazon Customer
4.0 out of 5 stars i love this series but this book was not how i thought
Reviewed in Canada on September 7, 2020
Verified Purchase
when i got this book i was excited to read it but it was not how i hopped for.
i love the series of i survived but this one was kind of lame.
but dont take my word for it, get a sample, and see for yourself.
thank you for reading my rating.
Read more
One person found this helpful
Report abuse

Kristina S.
2.0 out of 5 stars Story was not as good as the others
Reviewed in Canada on January 18, 2019
Verified Purchase
My son said this was the first story he has read by Lauren Tarsish that was lame. He was disappointed with it.
Read more
Report abuse

Amazon Customer
1.0 out of 5 stars sticky covers
Reviewed in Canada on November 22, 2020
Verified Purchase
very disappointed as the covers of the book are covered in a sticky substance
Read more
Report abuse

Amazon Customer
5.0 out of 5 stars Great book
Reviewed in Canada on October 19, 2018
Verified Purchase
Came on time and these books are so great for my kids. Easy to read and keep them interested as well as learning
Read more
Report abuse
See all reviews
Back to top
Get to Know Us
Make Money with Us
Amazon Payment Products
Let Us Help You
EnglishChoose a language for shopping. United StatesChoose a country/region for shopping.
© 1996-2021, Amazon.com, Inc. or its affiliates