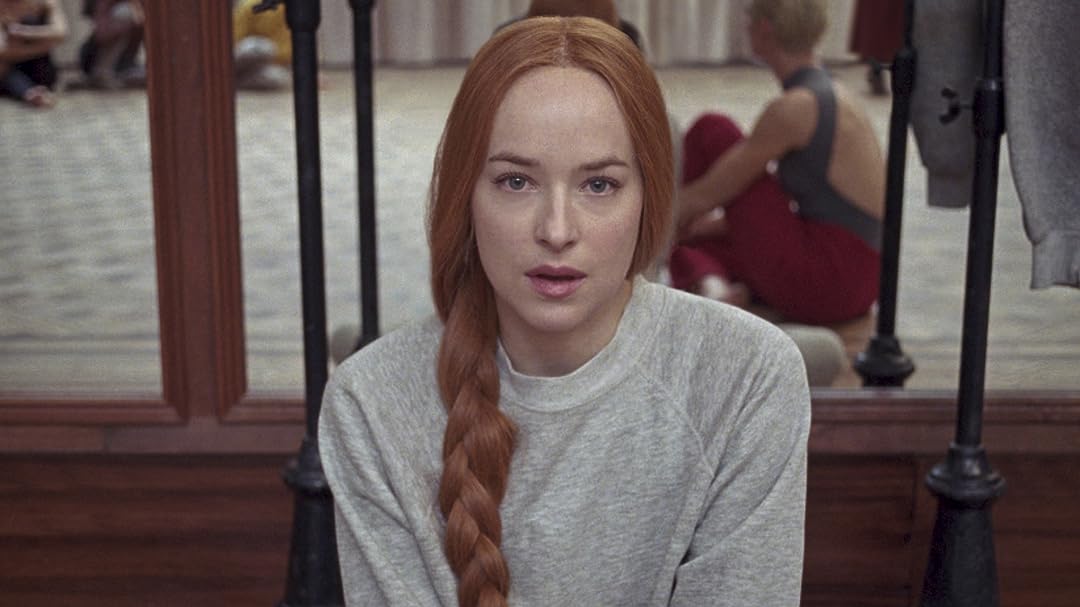 (1,866)6.72 h 32 min2018X-RayHDRUHDR
A darkness swirls at the center of a world-renowned dance company, one that will engulf the troupe's artistic director (Swinton), an ambitious young dancer (Johnson), and a grieving psychotherapist (Ebersdorf). Some will succumb to the nightmare. Others will finally wake up.

C. DeStefanoReviewed in the United States on January 17, 2019
1.0 out of 5 stars
Don't believe the hype; trust me
Verified purchase
This was without a doubt the most ridiculous, steam of consciousness bilge water I have witnessed on the ‘big’ screen. Some director decided to utilize the armature of a previous film to cut and paste disturbing imagery to a nonsensical screenplay and dialogue. I waited for this remake patiently and when Amazon offered it, I made the foolish decision to purchase the video. What I am left with is two hours plus of my life invested in a film with no direction, little entertainment value and devoid of anything coherent or substantial. This is the sort of film that people who fancy themselves part of the (self-ascribed) literati see and offer their insight and explanations. Words like, ethereal, esoteric, imaginative, intangible, and cryptic are just some of the adjectives that come to mind. One of my favorites in that realm include the old catch-all of ‘intellectual,’ which is a nuanced way of telling you they don’t truly know what it is they saw, but it must be good if even they don’t understand it. I consider myself reasonably intelligent and I could not begin to tell you the director’s motivation or the movie’s plot in any substantive detail. People often tell you to “save your money” or “don’t waste your time.” I can only say that I have seen the result of not accepting sage advice like those and I stand deeply corrected and stupefied at my lack of trust. Please, do not make the same poor decision.
618 people found this helpful
Report abuse

Linn RogersReviewed in the United States on January 16, 2019
5.0 out of 5 stars
A viscerally violent dance!
Verified purchase
Best horror movie of 2018. And that’s including Mandy. The original is visually wonderful with its technicolor magic. But it’s thin plot (which later the trilogy delves more into) had so much more there to tear into. The remake does that and more creating its own fresh film. The gore and violence is more than over the top with an art house approach that just intensifies the experience. It’s meant to scare you and it should. These aren’t good people. This is about rituals. Ambiguous esoteric occultic rituals! And so much more!
179 people found this helpful
Report abuse

JoniReviewed in the United States on January 16, 2019
5.0 out of 5 stars
Beautiful Film
Verified purchase
Definitely not a remake of the old Suspiria! Dakota Johnson, Mia Goth, and Tilda Swinton all shine in this film. If you’re a fan of Mother (2017) or Hereditary (2018) than this movie is for you! Very intellectual horror film. Different than the usual cheap jump scares like The Conjuring or Insidious. No cheap scares here! Definitely in my top 3 films of 2018. Beautiful acting, beautiful cinematography, beautiful soundtrack, with a gruesome story. Highly recommend for TRUE horror fans.
169 people found this helpful
Report abuse

Dave RReviewed in the United States on January 17, 2019
5.0 out of 5 stars
Gorgeous and touching - not what I expected
Verified purchase
This movie isn't what I expected. Certainly there are some very disturbing scenes, but it's by no means the non-stop parade of disgusting images I feared it might be. It's beautifully filmed, the editing is genius, and the script, while at times confusing, is ultimately satisfying. For a dark movie without a lot of "action", the 150 minute runtime flew by for me. I'm sure many will find it slow, sick, and/or confusing. It falls into the love it or hate it category. I think a simple viewing of the trailer will give you a good idea if this is your kind of thing or not. But if you watch it, definitely stick around for the epilogue, and after that let the credits roll to the very end. Glad I spent the 15 bucks to own it.
132 people found this helpful
Report abuse

Starr Kearney Reviewed in the United States on January 17, 2019
1.0 out of 5 stars
Disgrace to the first film
Verified purchase
This was nothing like the original. It's sexual under tones were bizarre. This gave no explanation of the witches and upfront gave this away. The movie did not even show the girls being poisoned...not much of a back story. The original is a million times better. This second version did not come across like an Italian horror film at all. Disappointed.
142 people found this helpful
Report abuse

Chipped.EgoReviewed in the United States on January 18, 2019
5.0 out of 5 stars
Dancer in the Dark
Verified purchase
Good horror, as history has shown, has always started at a point of divisiveness. Suspiria, The unapologetically artistic adaptation of the 1977 film of the same name, is no different. Many are going to try and figure which film is better, however, this film doesn’t try to outdo what Argento originally gave us; it expands on it. Making it a whole new experience all together.

While Dario offered a spectacle of neon colors and jarring sounds with his masterpiece, Luca does the opposite and makes the colors seen and known, yet muted and, for a lack of a better word, dull. The sounds are extreme, yet eerily soothing. It’s kind of amazing to compare the two! But for me it allowed the dance numbers to be the spotlight of the film and not the brutal violence, which of course serves it’s purpose, too.

I do get it’s a chore for many to watch, but if you take the time, turn off your phone, dim the lights, and cuddle with your partner or roommates or the adventurous family members, you can all cringe, laugh, gawk, and piece this gothic mystery together. Otherwise, if you’re looking for something a little more traditional, I’m afraid you’ll be disappointed.

ZankboyReviewed in the United States on January 17, 2019
5.0 out of 5 stars
Painstakingly Beautiful
Verified purchase
It's gruesome, it's beautiful, it's horrifying. Everything is so well detailed down to the typography on the posters in the background. Not to mention the soundtrack is done by the musical visionary; Thom Yorke. Everything about this film is perfect. This is definitely a bias review but if you like witches, fashion, contemporary music, beautiful cinematography, and Tilda Swinton, then this film is for you. Enjoy the ride.
103 people found this helpful
Report abuse

md2965Reviewed in the United States on January 28, 2019
1.0 out of 5 stars
Argento should call his lawyer
Verified purchase
Stupid me, waiting for this to come out and when it did was going to wait for a rental but I bought it instead. Waste of $15. I'm a huge fan of the original and it's my favorite Argento movie. I absolutely hated this. The school itself looked like a run down psychiatric hospital - all greys and browns. No suspense, no scares and I almost fell asleep twice. I'm not sure if it was because of Dakota Johnson or the dreadful soundtrack. And what's with all the political stuff? The last 15 - 20 minutes is ridiculous. All I can say is - wtf ? Mother Markos looked like a bad haunted house prop. People are calling it a "reimagining" or a "tribute" to Argento. it's neither of these things and if it was titled something different, there would be no reason to watch it at all unless you picked up the DVD in the dollar bin somewhere.

If the original was a beautiful bouquet of rare flowers and you bleached all the color out of them "because you could" it would be this movie. A year from now no one will remember it but the original will still be worth watching over and over. The only good thing about this movie is Tilda Swinton who is fantastic in anything she does. She's gets the one star. I now own a movie I will never watch again though possibly a good cure for insomnia.
50 people found this helpful
Report abuse
See all reviews
Back to top
Get to Know Us
Make Money with Us
Amazon Payment Products
Let Us Help You
EnglishChoose a language for shopping. United StatesChoose a country/region for shopping.
© 1996-2021, Amazon.com, Inc. or its affiliates