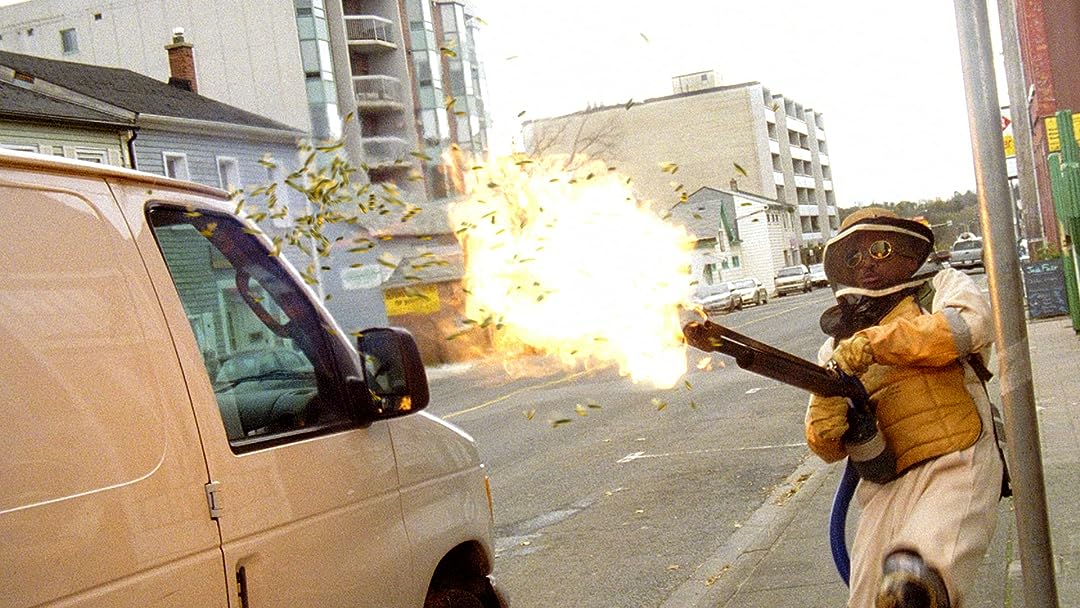 (37)
3.81 h 36 min2006PG-13
The residents of a small town find themselves battling a swarm of hornets that have been sprayed by a super pesticide.

Avid readerReviewed in the United States on March 10, 2021
4.0 out of 5 stars
More fun that I expected
Verified purchase
And considering it was from Filmrise, perhaps more fun than I am entitled to. It pulled Canadian actors whom many will be familiar with if they watched certain sci-fi TV episodes. The individual wasps were done very well, and the swarms were more than blurry black dots. And the scientist actually took responsibility for the mutants. There is the backstory of the mayor and police chief and the barbeque sauce ‘King’ and the cooking contest and the underhanded deal. Q, a bug exterminator, actually knows his stuff which was nice to see, rather than a bumbling fool. He also wanted to take responsibility for the escaped wasps that he thought he had killed. And the Mayor’s assistant, Ellie provided some wonderful comic relief. The wasp sound was, I feel, a bit overdone. I think they tried to make them as insect helicopters buzzing around. And during the first attack in the backyard, the meat on the grill was gray, but after the attack it was grilled brown. But for a low budget film, it was done fairly competently and was enjoyable watching. At the cookout and bocce court, it was probably a lot of local people who got their chance to act in a movie, and one they would not be ashamed of being in.
2 people found this helpful

James E. AddisonReviewed in the United States on March 24, 2021
3.0 out of 5 stars
I got ate up by yellow jackets!!
Verified purchase
1 star: couldn't watch more than 15 minutes. Unwatchable!
2 star: jumped my way to the end for the ending. Unwatchable, but interested in how this turd ended.
3 star: watched it all, but not happy about it. Nothing better to do.
4 star: I watched it, liked it well enough. Would never watch it again.
5 star: Great moving picture show! I'll watch it again, and maybe again in a few years.

I was eaten alive by a swarm of yellow jackets when I was a 5 years old, not a fun time. I still fear those little @#$%s!!! The only reason I watched this bad movie. So many goofs! Never seen a double barrel hammered shotgun fire without cocking the hammers first. Oh Canada!

EinsatzReviewed in the United States on March 29, 2021
4.0 out of 5 stars
“We can’t afford any bad publicity! Is that clear!”
Verified purchase
Yellow jackets modified to the point that they have become deadly, organize into a killing force. Sadly, no one wants to listen to this impending disaster, especially as it puts the annual burger cook-off in jeopardy. It’s up to a scientist (Michael Shanks), who could have been charged with criminal negligence for creating the problem in the first place, an insectologist (Carol Alt), and the local exterminator (Richard Chevolleau) to solve the problem for the town…saving some lives in the process.
Technically speaking, it’s not that great of a movie. But, I do enjoy killer insect flicks in general and this one suited me just fine.
One person found this helpful

N. SteproReviewed in the United States on January 14, 2008
4.0 out of 5 stars
enjoyable- not enough shanks
Verified purchase
Hey, I enjoyed it. a fun film, not taking itself seriously. I mean could you imagine the lawsuits in reality, not to mention the govt. coming down on the initial lab's a$$ about proper precautions, unauthorized personel, etc.

My only big beef was No.1 corpse's mouth being agape while on the table, and then closed for the close-up for the coroner to open his mouth.

Big creep out moment- the mayor getting it in the eye. Phobia wise I had to look away. I loved the assistant going after the bee with the double barrel! Fun, that!

Shanks was enjoyable. I don't know if this was a Sci-Fi production or not and he was required to be in this, but honestly he seemed fine in it. I mean , it isn't King Lear. Plus, I think the actor learned during his 'ascension' from Stargate:SG1 that work is work (I can't believe how many actors seem to forget that when they get into a successful series).

Lots of fun satisfying moments. its always fun when the bad guys, well not so much bad as as-holes, 'getting it' right after minimizing the danger. Wouldn't that be great in real life? Some jerk cuts ahead of you in line and , say, trips and breaks her leg on her way out. god, wouldn't that be great?

Another ick moment- Thomerson and the wasps in the air hose. Kent (Shanks) explaining things for us and then Alt (enton... entym... bug scientist) finishing it because she knows it already. And the 2 of them going after the swarm with the hero armed with 2 cans of Fix-a-flat, and little lady scientist with the big extinguisher. All in all a 4 star- I like it rating.
2 people found this helpful

JonathanReviewed in the United States on March 24, 2021
2.0 out of 5 stars
Exactly what you'd expect
Verified purchase
Do you like B/C grade horror movies? Then this is an ok thing to have on in the background. Michael Shanks seems to be sleeping through his role. There's nothing really original here, and it's generally not campy enough to be funny. It's a by the numbers killer swarm movie.

Graham P FieldingReviewed in the United States on March 19, 2021
5.0 out of 5 stars
Good Show!!
Verified purchase
Wasn't expecting much, but was I surprised! A really good "Bug" movie. Action all the way thru! Actors were quite good, and the "Bug" scenes were first rate! Fantastic Flick. I recommend it for a truly fun time!!!!!

Cat LoverReviewed in the United States on April 18, 2021
1.0 out of 5 stars
Poor Script and Poor Acting
Verified purchase
This film had a weak script and poor acting. The location was boring and didn't complement the film. I kept watching it hoping it would get better, but it never improved.
See all reviews
Back to top
Get to Know Us
Make Money with Us
Amazon Payment Products
Let Us Help You
EnglishChoose a language for shopping. United StatesChoose a country/region for shopping.
© 1996-2022, Amazon.com, Inc. or its affiliates