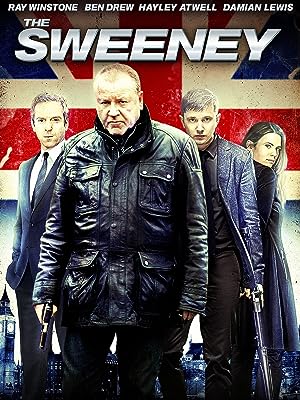 (756)
6.11 h 52 min2013X-RayR
Tearing up the streets of London, THE SWEENEY is a stylish, exhilarating action thriller proving sometimes you have to act like a criminal to catch a criminal.

Poet And PriestReviewed in the United States on August 9, 2020
2.0 out of 5 stars
If it wasn't supposedly from the show this rating wd not even be debatable
Verified purchase
Oh my gawd what a terrible movie.

Utterly formulaic, dialogue you can write yourself — and murmur just before they say it — massive plot holes [he's in prison! he's out of prison!] ... plot points that anyone in the movie who's ever watched a movie can get, regardless of whether they're cops they'd know just as 'normal people who watch movies' ... geezer bonking an attractive young female, uh-huh ...

At one point a character says, 'Hey that's the bank she worked at until two weeks ago' ... which they'd have known and made the connection and not been surprised by the robbery ...

A simulacra of mystery-plot-figure-it-out but you have to wear your waders to get anywhere near it.

Watchable only while doing something else that's worse — clipping the dog's toenails, cleaning a garage ...

Did I mention this is an awful film?

DistantechoReviewed in the United States on February 5, 2016
2.0 out of 5 stars
John Thaw is spinning in his grave
Verified purchase
Oh dear. I enjoyed the original 70's series immensely and own the first series on DVD and still occasionally watch it. I had hoped that this movie would not be quite as bad as many have said but unfortunately it was. The original Sweeney had grit, pathos and humor and was considered by members of the Flying Squad from that era to be reasonably close to accurate in its portrayal of their activities. It was in my opinion the best British cop show of all time and John Thaw and Dennis Waterman were perfectly cast. This on the other hand was a formulaic cop movie with a silly plot and a waste of the talent on show. Ray Winstone is a great actor (Sexy Beast and Scum are truly excellent movies that showcased his talents well) but he's utterly miscast here. Why Plan B was cast I have no clue but he bore no relation to the character of George Carter and can barely act. Atwell, Mackintosh and Lewis did their best but this is not something that they will want front and center of their resumes. I'm very disappointed as I really hoped that it would be better.
10 people found this helpful

WillReviewed in the United States on September 1, 2020
2.0 out of 5 stars
They need to go back to the firing range...
Verified purchase
They need to go back to the firing range for a LOT more practice -- bad shots, all of them.
Another British cop show where they're more worried about "procedures" than catching the bad guys. So much so, that in fact they imprison one of them, mostly because the big bosses don't like him. The higher ups don't even want to hear about where the bad guys are or who the bad guys are, they're just after the main cop that rubs them the wrong way. So the so-called 'good' cops have to go it alone without help from their bosses. Because of this dynamic, the movie becomes very predictable.

A. FergusonReviewed in the United States on January 28, 2016
4.0 out of 5 stars
Superbly acted British acted film
Verified purchase
The acting of this British Cop movie is superb, starring the always excellent Hayley Atwell. The movie is fast-paced and heart pounding. Overall, I really enjoyed the movie although there are more than a few scenes that seemed implausible. In fact, one of the most pivotal scenes was predictable and frustrating as the leader of the squad, Regan, puts his team (and London's citizens) in a situation that could only be described as inexcusably irresponsible. The disastrous results of that choice become that much more unforgiveable, making Regan come down in my estimation for the remainder of the film. Despite this, it's a worthy film for the mere fact that, yet again, the Brits show their acting skills are worthy of admiration. NOTE: The strong London Cockney accent is so strong that, at times (and depending on which character is speaking), American audiences may need the benefit of subtitles.
3 people found this helpful

ragingfieldmouseReviewed in the United States on November 3, 2017
5.0 out of 5 stars
"I'm not Bob Hotchkins"
Verified purchase
"Sexy Beast", Ray Winstone is pretty good in this one. Plot might be a little simple (the genre is saturated) Never the less the acting is believable. Wouldn't mind seeing more of this. Nick Love deserves a lot of credit for putting up w/ Clarkson Hammond & May while filming the chase scenes, I really think he thought they were going to help. Guess he never watched Top Gear. Funny thing, during that scene all I could think of was Jezzer was right, an Escort could never keep up w/a Jaguar. That & I wonder if Love got the idea to turn off the anti-lock brakes from him as well.
One person found this helpful

David E. BaldwinReviewed in the United States on July 13, 2013
4.0 out of 5 stars
A Squad Car of Dirty Harrys
Verified purchase
"The Sweeney" isn't the most original action picture but its London locale gives it something of an exotic touch. There's some noteworthy set pieces none more so than a shootout in Trafalgar Square that's reminiscent of a similar scene in Michael Mann's "Heat". Watching it the jaw drops in how-did-they-do-that amazement. As the leader of the elite police squad Ray Winstone brings the same brutish charisma to the proceedings that he offers in his gangster roles. Newcomer Ben Drew as Winstone's protégé shows promise. I understand he's a rapper in Britain so there is room for a second career. The tough uncompromising nature of the film may not be for all tastes but if you're a fan of British cops-and-robbers films this is something of a fair to middling offering.
2 people found this helpful

JJBReviewed in the United States on March 23, 2020
1.0 out of 5 stars
Just Ghastly Deradful
Verified purchase
WAY too over the top with the thuggery and the unrealistic plot. Just dumb.
One person found this helpful
See all reviews
Back to top
Get to Know Us
Make Money with Us
Amazon Payment Products
Let Us Help You
EnglishChoose a language for shopping. United StatesChoose a country/region for shopping.
© 1996-2021, Amazon.com, Inc. or its affiliates