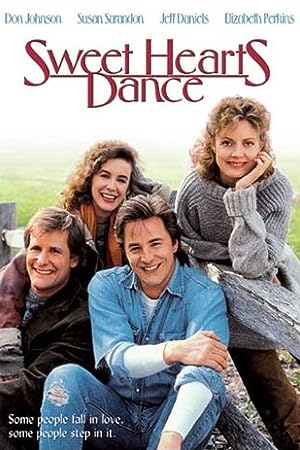 Casey AnnReviewed in the United States on December 31, 2016
4.0 out of 5 stars
Great love story from the 80's
Verified purchase
This 80's movie is really pretty good. This was don Johnson in his Miami Vice days, but his character (Wiley) is the furthest thing from Sonny Crockett. He plays a small town married man with kids who becomes disillusioned with his life. Susan Sarandon plays his wife who doesn't understand his unhappiness. Jeff Daniels is his best friend who longs for the love and family that Wiley has. He is probably my favorite character in the film. A lot of reviewers say that Sarandon was "too old" to play the part of Wiley's wife. I disagree as part of Wiley's character is that he's immature (he still wears his high school varsity jacket) and Sarandon character may have lost her ability to be spontaneous.
It's a nice little love story with great acting. I think that it's lack of popularity had a lot to do with Johnson's douchy reputation at the time the film came out.
3 people found this helpful

Rev. C. BryantReviewed in the United States on September 20, 2006
5.0 out of 5 stars
A LITTLE JEWEL OF A MOVIE
Verified purchase
I first saw Sweethearts Dance at its original release in 1988. I went alone, and I was lonely, because my wife and two sons were on a school trip or something. Perhaps because of this, it has stayed in my memory all these eighteen years. Sweethearts Dance was released the year before Field of Dreams, and in some ways it deserves similar status. Field of Dreams is about how easiy life can go awry. Everything is resolved through magic. Sweethearts Dance is about how easily the optimism of youth and the passion of marriage can be diluted by the routines of making a living, raising children, and managing a family. Everything is resolved through the persistence of love. Which one is more true to life? The film contains some memorable scenes, such as the turning point when Susan Sarandon's and Don Johnson's characters admit that all they want is to love each other. As Don, sitting in a tree outside the window of his own bedroom, tells his wife, "How did things get so screwed up? I miss you. I miss our children," my eyes filled with tears. Jeff Daniels, one of the best supporting actors in the business, loves Don and Susan both, and he has his own problems with love. He has found the perfect woman, but he pushes too hard and nearly loses her. The scene in which she calls him from home while he is on vacation to thank him for asking him to marry her also tugs at the heart. Jeff is able to say, "I like you," and it's enough to restore the relationship. The ending of the movie is one of the most delightful ever filmed--you'll laugh and cry at the tenderness and ridiculousness of it. Tender and ridiculous--kind of how love is sometimes. Last week I stumbled on it while looking for something else and bought it. Last night I watched it with my wife. It felt like something important had finally been finished.
6 people found this helpful

Peggy Randall-MartinReviewed in the United States on July 24, 2019
4.0 out of 5 stars
Sweet Hearts Dance the reason 'why fools fall in love'
Verified purchase
I have been a Don Johnson fan for a very long time, since the first episode of Miami Vice. Don lives the roles he plays so naturally. Don Johnson is the reason I watched the movie, and I enjoyed it because it has a full run of real life emotions - laughter to tears and back. One drawback was Susan Sarandon looked older than Don Johnson, and maybe that was the reason for casting her as his wife - the marriage was hitting rough waters... mismatched.

Research Librarian Reviewed in the United States on March 20, 2007
5.0 out of 5 stars
A Grown Up Movie
Verified purchase
I like Don Johnson in almost everything. The movie had alot of "F" words and God**** (which I didn't like). Overall, the movie was heartfelt and at times you wanted to just scream at both Susan and Don as they went through a 'rough patch' in their marriage. The acting was good and it made you think alot about life in general. It made me want to sit my husband down to watch it (maybe one day). I wouldn't let kids watch this because it has foul language, but as an adult I did my best to ignore it. The writer's could of definately left out the foul language or used less intense foul language. If you like Don Johnson, add this to your collection!
3 people found this helpful

Julia loves AmazonReviewed in the United States on September 18, 2013
3.0 out of 5 stars
Not quite as good as I remembered it
Verified purchase
I first saw this movie probably 15 years ago. It always stuck in my mind a great story and I like Don Johnson (way back from the Miami Vice days) . After seeing the movie this time I was somewhat disappointed because it just wasn't as good as I remembered it. Obviously the movie hasn't changed - so it must be me.

bradyReviewed in the United States on December 15, 2013
2.0 out of 5 stars
Great idea
Verified purchase
I lived in the town, Hyde Park, Vermont, at the time this movie was filmed. It has a wonderful cast - Jeff Daniels, Susan Sarandon, and others. But, the story does not hang together. Good to see the attractive town, though.