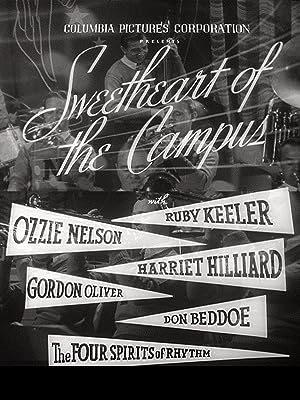 Sweetheart Of The Campus

(3)
5.41 h 7 min1941ALL
Ruby Keeler teams with the Nelsons (of TV and radio fame) as the singer in Ozzie's band. The setting is a college campus which is suffering from monetary woes, but somehow Ozzie's band manages to attract enough attention to increase the enrollment and keep the school from having to shut down.

H. BalaReviewed in the United States on September 28, 2014
3.0 out of 5 stars
"Zig me baby with a gentle zag"
My perspective is that of someone who grew up in the '70s and '80s and so cut my teeth on re-runs of The Adventures of Ozzie and Harriet. So imagine the sense of novelty and nostalgia I had when I saw this on TCM the other day, Sweetheart of the Campus. Besides Ozzie and Harriet Nelson (née Hilliard), the draw is Ruby Keeler who, in 1941, would have her peak on-screen career behind her. But never mind. She still hadn't lost her sunny disposition or her vigorous hoofing or her amazing gams. She certainly doesn't look out of place as a happening college girl.

Sweetheart of the Campus is one of them trifling "college movies" they used to trot out with regularity in the '40s (think 1947's Good News or 1943's Campus Rhythm). The plot doesn't elevate above the usual campus hijinks. The movie's heavy is pompous but influential old biddy, Mrs. Minnie Sparr (Kathleen Howard), who sics the local sheriff on a nightclub when it dares operate within five miles of her beloved Lambert Tech university (apparently, there's a state law prohibiting such temerity). And just like that, club performers bandleader Ozzie Norton (Nelson) and his band and featured dancer Betty Blake (Ruby Keeler) are out of their steady gig.

See, Mrs. Sparr champions these dusty, old notions on education. She's dead set against modern teaching techniques. At Lambert Tech she's already put the kibosh on football activities and on college dances. All the female students have pulled out, and here's Lambert Tech now strictly a men's college. Unless it can fluff up its student enrollment, good old Lambert Tech will soon be shutting down.

Here's the college president's daughter, Harriet Hale (Hilliard), fed up with stodgy Mrs. Sparr. Off Harriet goes, recruiting the bandleader and his band and that featured dancer as Lambert Tech's newest freshmen. Suddenly, Lambert Tech is being touted as the "school of rhythm" and Betty Blake promoted as the sole campus co-ed and the school gymnasium converted to a nightclub (only it's a "commissary" should Mrs. Sparr come a-snoopin'). Broadcasting on Station WOO and generating massive buzz, Ozzie and the gang (and even Harriet who - surprise! - can sing) pull Lambert Tech out of its monetary crunch. Ah, but Mrs. Sparr has one last dirty trick in the shape of the last-minute final exams, or to quote one stuffy professor: "It is rumored that these tests will be the most diffucult ever devised by mortal man." Yikes!

It's lightweight frivolity made entertaining by Ruby Keeler's taps and Harriet Hilliard's reedy singing. Sure, Keeler's style is more coltish and energetic than it is sleek and elegant, but you can't tell me it lacks for effervescence. Highlights for me are the swingy musical number "Zig Me Baby With A Gentle Zag," Harriet's singing "Where," and Keeler's tapping up a storm in "Tap Happy." Romance-wise, Ruby finds herself the third wheel in a romantic triangle involving her and Ozzie and Harriet, but how else was that gonna go? She frets: "Ozzie and Harriet. Ozzie and Harriet. The way you say it, they go together like ham and eggs!" If only there were a studly band manager (Gordon Oliver) pining in the wings. Sweetheart of the Campus is for those who enjoy sour-pussed authority figures getting their comeuppance and old-timey performers like Ruby Keeler and the Nelsons doing their thing. An above average 3 out of 5 stars.