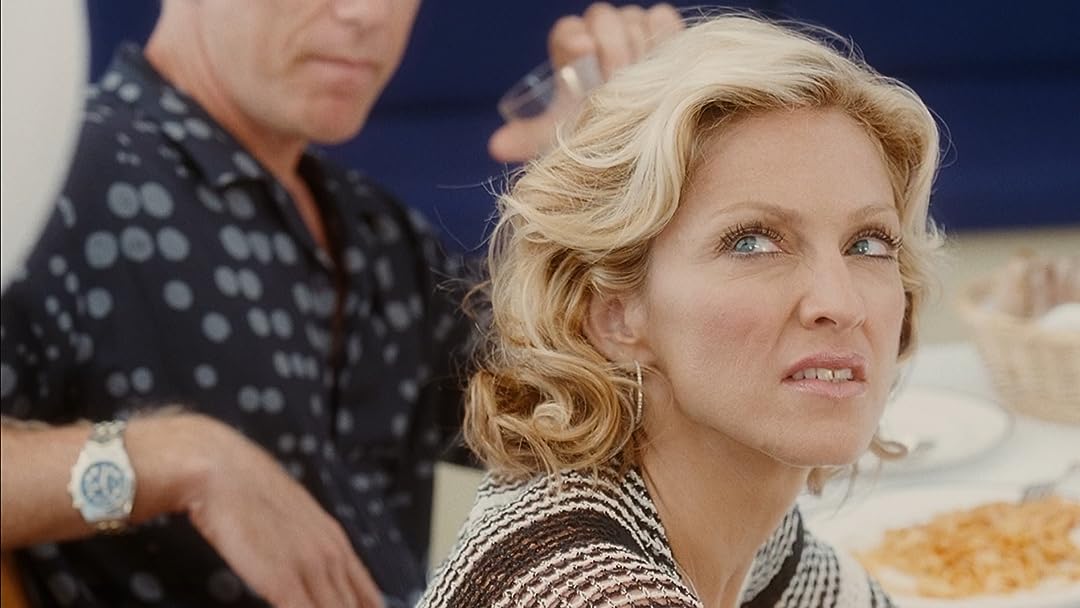 (429)
3.61 h 29 min2002R
A rich woman and some friends rent a yacht to sail the Mediterranean during the summer. On board isa Communist sailor who doesn't like this woman but has to deal with her shortcomings. One day, she wakes up late in the afternoon and asks to be taken to land where everyone had gone earlier. The sailor sets up a boat, but during the trip it breaks down. They spend the night in the middle of the s..

Sammy DudeReviewed in the United States on June 14, 2019
2.0 out of 5 stars
Why Take On A Masterpiece And Ruin It?
Verified purchase
Madonna: C; Italian Actor: A+; Guy Ritchie: F-. Madonna had her moments . . . of being herself. She tried to act and I'll give her credit for that. The moment where her character becomes Guiseppe's slave isn't there emotionally and physically. You see this in the original. It's SO obvious in the original--you feel it. That reversal of roles in the original is so palpable--her dependence on him. Why take on a Masterpiece? Ritchie ruined it. On a side note, Jeanne Tripplehorn isn't aging very well. Madonna's skinny body with bursting veins and outy belly button is a turn-off. Shame on the makeup team for not making their skin overexposed to the sun, as well as their hair and nails. Their clothes would have been bleached. Guy Ritchie: get another job. Madonna: stick to music and politics. Jeanne Tripplehorn: find a good plastic surgeon and retire gracefully. Elizabeth Banks: keep taking acting lessons.
6 people found this helpful

Brooklyn PhantomReviewed in the United States on May 14, 2022
1.0 out of 5 stars
Bad acting sinks this film.
Verified purchase
Madonna was good in this. Her costar the son of the original lead in the original film can't act. I blame Guy Richie for the failure of this film. He should've got a better performance from the actors. Mainly Madonna's beefy costar. I believe most Madonna fans will still enjoy this film. The story was interesting. The execution was poor. Madonna should've been shot better. The scenes on the beach should've been sexier. Two sexy people on an island and we don't even get one decent sex scene. SMH. Recommended for die hard Madonna fans.

Motherof10Reviewed in the United States on March 7, 2018
1.0 out of 5 stars
Very Bad Acting
Verified purchase
Awful, don't waste your time. The acting is horrendous and the story is bad. This says a lot about Guy Ritchie who is usually talented but not in this instance, maybe some underlying problems in the marriage at the time? Madonna is such a bad actress and the premise is ridiculous. If you waste your time and money on this movie, be forwarned you will regret it.
4 people found this helpful

Christopher SalvatoreReviewed in the United States on February 16, 2003
3.0 out of 5 stars
Get "Swept Away" at least for a little while....
Verified purchase
When "Swept Away" was released in American theaters last fall it was savaged by critics and dubbed one of the biggest flops of the year. It is important to remember that "Swept Away" was never intended by Guy Ritchie and company to have the same box office as "Spiderman". "Swept Away" is basically a vacation picture for Guy Ritchie and wife Madonna, it was not intended to win any oscars. The budget was quite small, so nobody lost money...unlike say Eddie Murphy's "Pluto Nash" which cost 100 million, and only took in 15 million.
The movie is not nearly as bad as say "Ishtar" or "Shangi Surprise" that being said it is still not a great cinematic masterpiece. Much has been said about Madonna's performence, that she was wooden and simply cannot act (she is better than Ben Afflect any day!), which is not true. In the first third of the film, she does quite well as Amber, a spoiled American, who is the wife of a pharmaceutical big shot. She is rude, ignorant, and petulant, I have dealt with many a woman like this and Madonna does a great job here. The supporting cast does a good job here too, giving us an idea of Amber world as well as the ships mate fisherman Pepe (Adriano Gianini)-who also does a decent job here in his first English speaking role.
In the remainder of the film, Madonna's quasi English accent appears (which is odd here, well it is always odd..) since she is supposed to be American here. She is a tad unanimated once Amber and Pepe are rescued, which may be the fault of Richie's script and direction-other directors have gotten better performences out of Madonna (Penny Marshall, Warren Beatty).
That being said, the film is beautiful to look at. Ritchie choice of Malta as a film location was well selected, as it is one of the most breathtakingly stunning films to watch. Madonna also looks stunning here, even sans makeup, all those years of yoga, a vegetarian diet, and clean living have paid off here! Gianini is also, while unkempt, quite fit and pairs nicely with Madonna, though in the fight scenes I think Madonna could beat the pants off of him, her biceps are bigger than his.
All in all the film is worth watching, the small budget shows, Ritchie's script could have used more polish, but it is worth viewing, with an open mind. Viewers may be pleasently surprised that this film is much better than the press said.
The DVD is a great value: it features the film, 16 deleted scenes, The Making of Swept Away special, and trailers.
I would recommend "Swept Away" for people who like, odd, art house style flicks.

TonyG5003Reviewed in the United States on February 14, 2003
3.0 out of 5 stars
Not nearly as bad as the critics said!
Verified purchase
Madonna and her husband must have really stepped on some wrong toes to warrant such an incredibly undeserved public lashing. I can't imagine why so many critics jumped on the bandwagon. While wathcing this movie, I asked myself "did the critics even WATCH the movie?"
While I will admit that Madonna is no Meryl Streep, this is certainly not her worst performance, and at times, she performs the best she ever has, especially halfway into the movie and towards the end. In the beginning, she is a bit wooden, but I think part of that was an intentional reflection of the character.
I found myself laughing at many scenes in the movie, and emotionally moved in others. Other than the corny line that Madonna speaks into the phone towards the end ("my darling"), I did not see much wrong with this movie. I would have to say that I enjoyed watching it.
It's a hell of a lot better than The Next Best Thing!
8 people found this helpful

Reader CGReviewed in the United States on April 8, 2022
1.0 out of 5 stars
Too much abuse
Verified purchase
Watched both the old and new version of this story. Hated both of them. Acting was 2nd rate and there was too much abuse.

Amazon CustomerReviewed in the United States on May 1, 2021
2.0 out of 5 stars
A mess, a swing and a miss for Miss Madonna
Verified purchase
The scenes of abuse and violence towards women (Madonna) was really triggering and hard to watch. The movie as a whole was just a miss entirely, although I will say the acting wasn't horrible. It could've been a mediocre rom-com love story type, but was just insufferable - and all this comes from me, a huge Madonna fan. Even for its short length it seems like the movie just drags on and the ending was so beyond whack.

Steven Adam RenkovishReviewed in the United States on April 27, 2003
2.0 out of 5 stars
Mediocre attempt at filmmaking by Guy Ritchie......
Verified purchase
I watched this one with a bit of caution. I was curious to see what the outcome would be. I liked Guy Ritchie's previous films, so I thought, despite all the bad press surrounding this film, I'd give it a shot. Well, here it goes...
It was mildly entertaining, but it wasn't great at all. Madonna can't really act all that well, and needs to stick to her day job. She was great in "A League of Their Own", but in this particular film, you could tell she was trying really hard to make the best of it, but it just didn't work. The script by Ritchie was full of unbelievably corny scenes and bits of dialogue. The scene where Giancarlo Gianni and Madonna play charades in the cabin by the beach is unbearable...
Other than all of that, the scenery is beautiful, and like I said, its mildy entertaining...enough so that you can make it through the entire film. BARELY make it through, rather.
SKIP IT or watch if there is absolutly nothing else to choose from.
3 people found this helpful
See all reviews
Back to top
Get to Know Us
Make Money with Us
Amazon Payment Products
Let Us Help You
EnglishChoose a language for shopping. United StatesChoose a country/region for shopping.
© 1996-2022, Amazon.com, Inc. or its affiliates