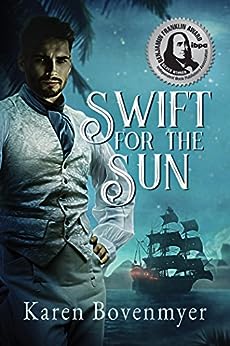 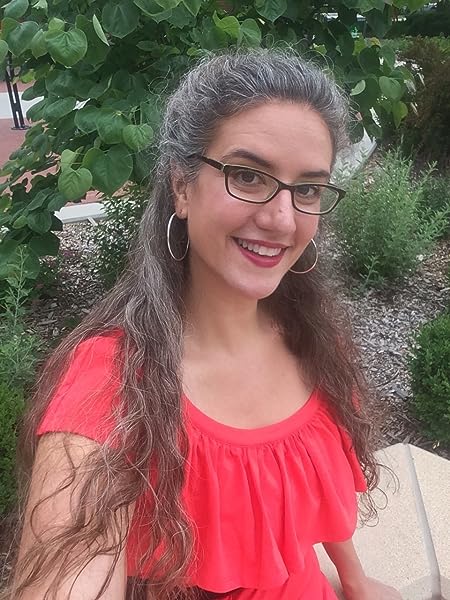 Swift for the Sun Kindle Edition

Karen Bovenmyer earned an MFA in Creative Writing: Popular Fiction from the University of Southern Maine. She currently serves as the Nonfiction Assistant Editor of Escape Artists' Mothership Zeta Magazine and is the 2016 recipient of the Horror Writer's Association Mary Wollstonecraft Shelley Scholarship. Her science fiction, fantasy, and horror novellas, short stories, and poems appear in more than twenty publications. Though she triple-majored in anthropology, English, and history for her BS from Iowa State University in 1997, Swift for the Sun is her first published work of historical fiction. --This text refers to the paperback edition.

4.5 out of 5 stars
4.5 out of 5
20 global ratings
How are ratings calculated?
To calculate the overall star rating and percentage breakdown by star, we don’t use a simple average. Instead, our system considers things like how recent a review is and if the reviewer bought the item on Amazon. It also analyzes reviews to verify trustworthiness.
Top reviews

April
5.0 out of 5 stars Rollicking Historical Adventure-- with Pirates and Intrigue and Soul-searching and True Love!
Reviewed in the United States on April 4, 2017
Verified Purchase
Benjamin has escaped from an ordinary life to adventure on the High Seas, only he's way over his head. He's jumped into a smuggling scheme where he's posing as a notorious Captain, only he knows about as much about sailing as any lubber. When he finds himself ship-wrecked on a desert isle with a dark reputation, he's not any better off, having only lived in more civilized surroundings.

Sun (an Anglicized version of his name given by Benjamin, rather like Defoe's Robinson Crusoe christened his Friday), is man who has escaped the pirates that had him enslaved. Fortunately for Benjamin, he knows much better how to survive and saves Benjamin's life.

There is a lot going on in this book. There are historical political and social details that impact the events. The voices (in speech and thought) of the characters pay homage to the period. Benjamin struggles with his attraction to men, as the son of a preacher who regularly made sure to beat things out of him. He also has moral issues with some of the cardinal sins, despite his involving himself with plots and smugglers. But never fear, these things help set the period and are mostly a subtext rather than plot points. There are also so many micro-tropes played with here-- the twin from different parents, shipwrecked, mysterious island (with a volcano!), white slave, forced to fight in the pits, Man Friday... and that's only in the beginning of the book! But again, never fear, the story goes beyond the toying with these, so that they are almost throw-aways, put there for pure fun.

Benjamin and Sun do not immediately make a sweet couple. They each have their issues and flaws. But it is an exciting journey to go with them as they figure themselves out, become better men, and ultimately forge their fate together.

[Sex is had, but handled lightly with historical terms. There is rape, but handled similarly and briefly.]
Read more
One person found this helpful
Helpful
Report abuse

Aidan
3.0 out of 5 stars 2.5 stars
Reviewed in the United States on August 18, 2019
Verified Purchase
This book was fine, I didn’t hate it. I might have rather it a bit higher, until they came to the stupid matelot crap. Firstly, “matelot” just means “sailor” so every time they were like “there’s so many matelots” - yeah I bet so, on a boat. It was just...so over-emphasized. If they had just been like “we engaged in a matelotage” and moved on I would have thought it a cute element, but then the author just beat the damn concept into the ground! There’s minimal evidence/information about matelotage at all, certainly no indication that there were scores of them congregating in the Caribbean and being all publicly mushy. It was just so ridiculous and became way too big of an element of the story - if I have to hear the term “matelot” again anytime soon I think I’ll scream.
Read more
Helpful
Report abuse

Johnny
5.0 out of 5 stars A Daring Tale of Pirate Passion
Reviewed in the United States on October 5, 2020
Verified Purchase
Well written and historically educational, “Swift for the Sun,” is the tale of two men who fall in love after being shipwrecked on an island.

It goes back and forth between being a romance and an adventure story, and despite some unsettling situations tends to stay lighthearted and comforting.

Kindle Customer
5.0 out of 5 stars Excellent reading experience.
Reviewed in the United States on April 3, 2017
Verified Purchase
This book has everything I want in a good story. Likeable main characters, depth and insight into the time period and people, and an intriguing plot. And I love the tropical setting.

I love that Benjamin and Sun find and help each other during dark times. With every bad thing that happens to them, their bond grows stronger. They are two very appealing men and their relationship feels quite natural.

It is refreshing to read such good writing and strong characterization.

I can highly recommend this book to fans of historical and romance genres alike. Really, this book is superb.
Read more
2 people found this helpful
Helpful
Report abuse

runningcaj
5.0 out of 5 stars Identity and Belonging
Reviewed in the United States on August 8, 2017
Verified Purchase
Reading this genre was a departure for me, but I am glad I picked it up. It delivered an overarching message of belonging, identity, and happiness and how they are inextricably tied to those we love and trust. The characters came alive and, as a reader, I wished many of them could be close friends. I found comfort in their words to each other: "you make people belong. You make me want...to belong again." It is not a read for the faint-of-heart, but I enjoyed it a lot.
Read more
Helpful
Report abuse

pjhempe2
5.0 out of 5 stars Karen is a good friend of mine
Reviewed in the United States on April 30, 2017
Verified Purchase
Karen is a good friend of mine. I have read several of her short stories over time. For her first novel I think she did a super job. I don't typically read romance, let alone LGBT books. I was hooked, I basically read it all one night. I really got into the lives of these characters, almost feel like they are family. I hope they turn up again.
Read more
Helpful
Report abuse

Charles Hall
3.0 out of 5 stars A pirate tale's not for me!
Reviewed in Canada on June 21, 2017
Verified Purchase
I really struggled with this, my first gay pirate tale. While the writing/editing were good, I just could not get into the characters or story. If you like this sort of gay pirate genre, then give it a try. However, for me I found the story overblown and too unbelievable to care much how it ended.
Read more
Report abuse
See all reviews
Back to top
Get to Know Us
Make Money with Us
Amazon Payment Products
Let Us Help You
EnglishChoose a language for shopping. United StatesChoose a country/region for shopping.
© 1996-2021, Amazon.com, Inc. or its affiliates