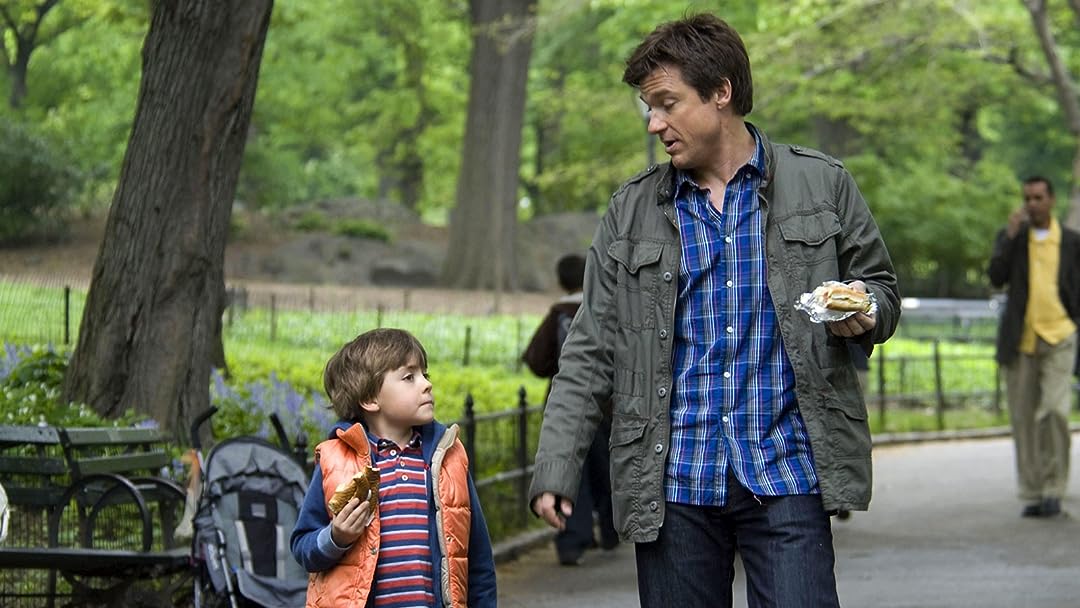 (5,575)
6.11 h 41 min2010X-RayPG-13
Jennifer Aniston stars alongside Jason Bateman in this offbeat comedy as Kassie, a smart, fun-loving single woman who decides to have a baby, with hysterical consequences.

GC LAReviewed in the United States on August 17, 2016
3.0 out of 5 stars
it's NOT horrible. As far a romantic comedies are concerned
Verified purchase
Let me put it this way: it's NOT horrible. As far a romantic comedies are concerned, it's pretty good which, let's face it, in this day and age is really saying something. Which probably makes perfect sense since The Switch was actually released in 2010. Not that 2010 was the zenith of quality filmmaking or anything like that but compared to the onslaught recent comic book / vampire / werewolf / zombie / YA junk that we've been subjected to for the last 5-6 years, The Switch would almost qualify for inclusion on the National Film Registry by comparison. Aniston is pretty good but Bateman carries the movie, as usual. All in all, it's good old fashioned, by the book filmmaking, done in a quality way, with good production values, good story & good acting. If you're in the mood for that, it's definitely worth a viewing.
4 people found this helpful

Joanna McKennaReviewed in the United States on November 25, 2017
5.0 out of 5 stars
A plot not possible pre-DNA.
Verified purchase
In a nutshell, Jennifer Aniston and Jason Bateman's characters were best friends for years until she heeds her biological clock and wants to have a child. Alone. Via an anonymous sperm donor she picks after Bateman declines. Or so they all believe.

Fast forward almost 6 years to when she returns to NYC with her very intelligent, very precocious son, who oddly looks and acts *a lot* like Bateman. But that can't be because she's tracked down the sperm donor, a total jerk to all but Aniston, and they've become engaged. No surprise that the son can't stand the guy even though he's (supposedly) his birth father, and keeps finding ways to spend time with Bateman, whom he adores.

What could be just another cheesy, sappy chick flick is instead elevated to a smart and funny movie by the presence of Bateman, Aniston and the child actor who plays the son, Sebastion.

grayghostAmazon CustomerReviewed in the United States on January 25, 2020
4.0 out of 5 stars
this was a fun watch
Verified purchase
This movie was sort of real life with two people who if they looked closer earlier they would have known they were attracted to each other why else would you be in constant contact. they way the movie and story developed was funny and you could see a drunk guy trying to figure out how to correct his mishap. glad I watched

DJReviewed in the United States on October 11, 2020
5.0 out of 5 stars
I have watched this several times.
Verified purchase
Fun movie. Gives us something to think about as social issues change so fast. It presents some serious issues in a fun , funny kind of way and I have watched it several times, coming away with something new each time. I love these actors/actresses and the child is adorable!
2 people found this helpful

D. CurtisReviewed in the United States on August 10, 2015
4.0 out of 5 stars
Relax and Watch
Verified purchase
I enjoyed both performances from Aniston and Bateman. Personally, I think anyone who says Jennifer Aniston cannot do more serious roles is just wrong -- IMHO. Thomas Robinson as her little boy was amazing -- adorable kid and he can act!. The plot is fun but not very complex -- a good vehicle for actors who exhibit some chemistry, which I believe was the case here. Too often in relationship movies -- including this one -- I find myself asking why is this or that is so complicated for a character to communicate to the love interest as opposed to agonizing over it, but it is a tension driver in a romance movie. Also, I suppose we all make things more complicated than necessary in our real life relationships, don't we? By the way, this has drama, comedy and eventually, romance.
4 people found this helpful

AWReviewed in the United States on October 7, 2015
3.0 out of 5 stars
Give it a try
Verified purchase
The movie started out very predictable. The lines and script was typical and there was nothing special at all about the main characters and especially the supporting actors. The movie started out not believable. I almost thought I would have to stop watching until the movie introduced the "son". That's when the film turned around for me. I was so intrigued when the young actor and his acting talent. And the relationship with Jason Baitman's character and the young boy was very special. That just made the movie for me. Jason's character was sad and once the boy was introduced it all came together and made sense for me. I recommend you give this movie a try with no expectations and I think you will not be disappointed. I really love movies that make me feel something and leave me with something. I totally didn't expect this movie to give me that when I started it. It wasn't until half way in that I suddenly started to enjoy it.
4 people found this helpful

neit2Reviewed in the United States on August 24, 2016
4.0 out of 5 stars
Surprisingly Sweet and Warm
Verified purchase
Jennifer Anniston is right up there with Kate Hudson for making some of the worst, most awful rom-coms of all time. Someone needs to have a contest between the two and settle it already. Needless to say, I'm not normally a fan. I do like Bateman, though, and based on other reviews I thought I'd give this a try. Not disappointed! Sure there are cheezy and unbelievable moments, but it's mostly sweet and funny. Bateman is great as always. Anniston does a nice job. Supporting cast is excellent. Ladies will likely share some tears. Dudes won't be too irritated by the proceedings.
4 people found this helpful

Chris T.Reviewed in the United States on March 29, 2012
5.0 out of 5 stars
cute...
Verified purchase
After reading Jason Bateman's interview in Men's Health magazine...and his comment about not picking "low-hanging fruit" anymore as far as parts in movies were concerned, I was curious what his idea of higher-hanging fruit was...so I bought the movie...(hard to find movies where we live...had to do the purchase)... Although my husband and I have only viewed the film once (we'd like to see it again), I will say that Jason Bateman really steals the movie ~ with or without the young boy who plays his son... It's funny.......different....and Jason really knows how to come across as very believeable...... We loved him in Mr. Magorium's Wonder Emporium, too ~ again...very believeable...very "real"...

UPDATE: Just changed my star rating to a five from a four after watching the movie a few more times. Good movie.