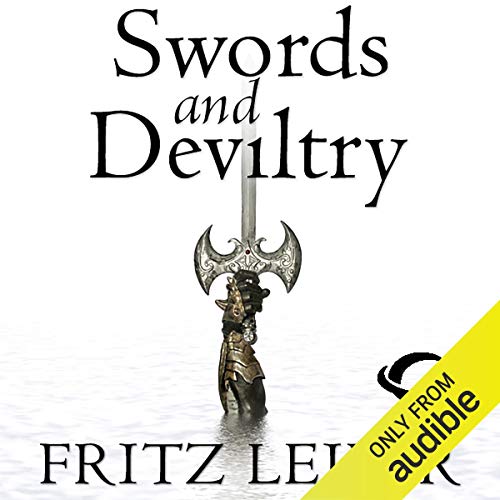 Swords and Deviltry: The Adventures of Fafhrd and the Gray Mouser

In the ancient city of Lankhmar, two men forge a friendship in battle. The red-haired barbarian Fafhrd left the snowy reaches of Nehwon looking for a new life, while the Gray Mouser, apprentice magician, fled after finding his master dead. These bawdy brothers-in-arms cement a friendship that leads them through the wilds of Nehwon, facing thieves, wizards, princesses, and the depths of their desires and fears.

The late Fritz Leiber's tales of Fafhrd and the Gray Mouser launched the sword-and-sorcery genre, and were the inspiration for the fantasy role-playing game Dungeons and Dragons.

Special invitation from Audible!
Learn more about Membership
List Price: $24.05
You Save: $3.06 (13%)
By completing your purchase, you agree to Audible’s Conditions Of Use
Sold and delivered by Audible, an Amazon company
Share

4.3 out of 5 stars
4.3 out of 5
400 global ratings
How are ratings calculated?
To calculate the overall star rating and percentage breakdown by star, we don’t use a simple average. Instead, our system considers things like how recent a review is and if the reviewer bought the item on Amazon. It also analyzes reviews to verify trustworthiness.
Top reviews

Josh Mauthe
4.0 out of 5 stars No matter the age, it feels fresh, fun, and exciting even 60 years onward
Reviewed in the United States on February 4, 2018
Verified Purchase
I grew up reading a lot of classic pulp fantasy and sci-fi, as well as authors who were inspired by that generation of writing, and yet, somehow, I don't know that I read much by Fritz Leiber, one of the most iconic fantasy writers of all time. If I did read much from the man who coined the phrase "Swords and sorcery," it hasn't stuck with me, because almost everything about Swords and Deviltry - the first collection of stories about Fafhrd the barbarian and the Gray Mouser, a magic-wielding thief - felt new and unexpected to me - in a very good way.

Now, to say that Swords and Deviltry - a collection of four short stories, two of which provide individual backstories, and one of which includes the fateful meeting and first adventure of Fafhrd and the Gray Mouser - feels "new and unexpected" may give you the sense that this is new and revolutionary stuff. It's not, or at least, it's not now; there's little denying that this is the foundation of so much fantasy that came after it, setting the groundwork for generations of writers to follow in his footsteps. Written in the late 1950's, the stories here are pure, old-school pulp fantasy, with epic heroes, fantastic settings, complex names that feel a bit over-the-top, and more - in other words, if you've ever played Dungeons and Dragons, you'll feel right at home. And yes, they're dated, in some ways, although surprisingly less than you might fear; the casual inclusion of allusions to Islamic faith surprised me in a good way, and while there's still some of the rampant sexuality of pulp fantasy, it's far less skeezy and misogynistic than so much of that tends to be, giving the female characters more personality than you'd expect from the period, to say nothing of the agency they display over their own lives and choices. (Indeed, even the first society we see here - from whence Fafhrd originates - is a matriarchal society in every imaginable way.)

No, what I didn't expect about Swords and Deviltry was the light tone Leiber brings to bear here. Much of Fafhrd and the Gray Mouser's first meeting is done in a gloriously light tone, from their unexpected alliance as they both attempt to rob a merchant to a night of heavy drinking and very bad plan making. There's a sense of wry fun to the enterprise that's impossible not to enjoy, and it really sets the books apart from what I expected. There's a sense that Leiber wanted his fantasy to be, well, more grounded than so much of the genre can be, finding the quiet humor and dry wit that most people really have in life. And the result is both fun and exciting, mixing great action sequences with fun dialogue, and letting the plot unfold at a perfect pace to keep you drawn in. (And the end of "Ill Met in Lankhmar" packs an unexpected wallop, as the boys drop the jokes and banter, and unleash hell on those that have wronged them.) I had a blast with it, and feel like it's every bit as good now as it was when it was written, over 60 years ago - it's still fresh, fun, exciting, and holds its own, not just as a historical artifact, but as its own wonderful creation.
Read more
22 people found this helpful
Helpful
Report abuse

Amazon Customer
4.0 out of 5 stars Welcome to Nehwon
Reviewed in the United States on June 9, 2016
Verified Purchase
For those who wish to enter the world of Fafhrd and the Grey Mouser, the archetypical heroic couplet of the swords and sorcery genre, this is where you start. It contains three short [or, more accurately, longish] stories that introduce these two intrepid characters and the wonderful, magical, mysterious world of Newhon, world of the great Cold Waste and of Lankhmar, City of the Black Toga, of the savage Mingol horsemen, and of fierce northern barbarians.

In the first tale, The Snow Women, we meet the young Fafhrd, giant of stature, red-gold haired and mighty of thew and discover how he came to find the glorious Vlana. We learn how together they fled Fafhrd’s own Snow Clan, pursued by the swords of savage foemen and the ensorcelments of the terrible matriarch Mor as they headed to the warm lands of the Eight Cites. The second tale, The Unholy Grail, tells of the beginnings of the young man known at first only as Mouse, the wizard’s apprentice, and of how he could never really work out whether he pursued the black magic or the white, and hence became Grey. Nor was he timid, as the name might suggest, but was possessed of great cunning and agility, which transformed the Mouse into the Mouser. The third tale, Ill Met in Lankhmar, speaks of their eventual meeting and the forging of their remarkable partnership.

The origins of these two characters go back to the late 1930s, to the very beginnings of the swords and sorcery genre. Under Leiber’s masterful pen they evolved over the years to become the pair that we may enjoy today, ever fresh, ever new, the inspiration behind many a later story, my own novels included. Leiber’s unique style, dramatic yet tongue-in-cheek, is ageless and I can only hope that many generations of fantasy fans will enjoy his story-telling in the years to come, and, hopefully, inspire a few like-minded souls with a gift for words to try to emulate him.

To do that, first you must learn of Fafhrd and the Grey Mouser, and ‘Swords and Deviltry’ will begin the lesson.

Four and a half stars from me.

M. J. Haynes
5.0 out of 5 stars Start of the Saga of Fafhrd and the Grey Mouser
Reviewed in the United Kingdom on August 13, 2017
Verified Purchase
Fritz Leiber made a notable contribution to the sword and sorcery fantasy sub-genre in the mid-twentieth century with his stories of the roguish adventures of the duo Fafhrd, a tall, powerful barbarian, and the Gray Mouser, small but cunning and with deadly agility. The adventures take place in the world of Nehwon (‘no when’ backwards), especially centred around the city of Lankhmar. Nehwon is a typical setting for this kind of fiction, familiar since the writings of Robert E Howard, with ancient medieval-like cities, barbarian tribes and powerful magic. Leiber produced these stories for several decades, starting in 1939, but they were collected from 1970 on in series of chronologically-ordered volumes. Swords and Deviltry is the first of these.

The book consists of three novellas and a short introduction. The first two novellas are essentially ‘origin’ stories, recounting the early, separate adventures of Fafhrd and the Grey Mouser. “The Snow Women” takes place in Fafhrd’s snowy, forested homeland, where the local people have a Viking-like culture but with a more matriarchal flavour than this historical prototype. Fafhrd is a wistful youth dreaming of seeing the wider world and in particular its civilised regions. Adventure begins for him when a troupe of travelling entertainers pays their annual visit to his village. In “The Unholy Grail” Mouse is apprenticed to learn white magic with an elderly hedge wizard. The latter is murdered and the subsequent revenge tale sees Mouse transformed into the Grey Mouser. Both of these tales end with the protagonist fleeing to the ultimate destination of Lankhmar, with their first loves in tow. In “Ill Met in Lankhmar” the duo finally meets up and joins forces, and tragedy ensues when they cross the powerful Thieves’ Guild.

This is a fine collection, all the stories individually strong. “The Snow Women” has some very evocative details, such as the insidious frost witchcraft employed by the tribal women, led by Fafhrd’s mother. “Ill Met in Lankhmar” is the best and best known story, and won multiple awards. It has an emotional impact, especially one particular shock moment. Leiber remains of interest as a writer of speculative and fantastic fiction, and I recommend trying his work, such as this book, to those who don’t know it.
Read more
6 people found this helpful
Report abuse

Henk Beentje
5.0 out of 5 stars How two flawed heroes meet: book 1 in Fafrhd & the Grey Mouser series
Reviewed in the United Kingdom on April 24, 2013
Verified Purchase
In the first of the three parts we meet a Northern Barbarian, with itchy feet and a pushy mother; when an artists' troupe comes to the village, the itch is unchained. In part two a warlock's apprentice comes home from a long quest, finds trouble where he least expects it, and has to use all the magic he can lay his hands on - white and black. In part three, the two meet at a robbery of thieves, bring the loot home to their ladies, and drink a lot; then the ladies make them fulfill a long-standing promise, which lead to trouble, death (a lot of deaths) and the cementing af a great partnership - albeit in great grief, too.

My opinion: I like many of Leiber's SF stories, but in these sword&sorcery tales (and Leiber was the one who first coined the term!) he is at the top of his form: a rollicking good tale, mixed with humour, a healthy dose of cynicism, and a bit of tongue in cheek - coupled to some good old gruesome horror. A winning combination, and the product is an addictive series of stories. You have been warned!
Read more
6 people found this helpful
Report abuse

Mr. S. R. Jones
5.0 out of 5 stars Old but Good
Reviewed in the United Kingdom on March 11, 2013
Verified Purchase
This is one of those stories that shows it's age, but doesn't suffer from it. The characters are entertaining, and the situations are more engaging than I would have expected them to be. I picked up this book because my housemate recommended it, and I am normally not swayed by his recommendations... but this time he got it right. This is classic fantasy at it's best.
Read more
4 people found this helpful
Report abuse

Mrs Joyce L S
4.0 out of 5 stars Brilliant classic fantasy
Reviewed in the United Kingdom on October 8, 2014
Verified Purchase
A great original fantasy adventure. Leader's writing is both grammatical and flowing. It is stylistically superior to many modern fantasy writers in that it doesn't dumb down the descriptive language used.
Read more
2 people found this helpful
Report abuse