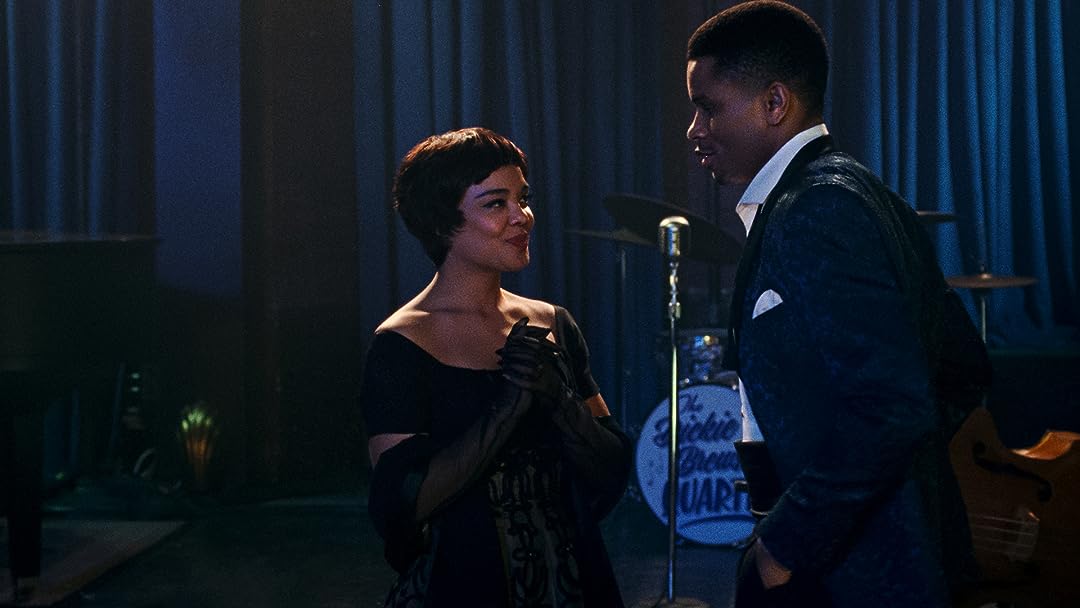 (2,257)6.81 h 56 min2020X-RayHDRUHD13+
When a young woman meets an aspiring saxophonist in her father’s record shop in 1950s Harlem, their love ignites a sweeping romance that transcends changing times, geography, and professional success.

Aspen VedaReviewed in the United States on December 28, 2020
4.0 out of 5 stars
A Wonderful Romantic Movie We Need...
Verified purchase
This is a period piece set in the 1950's-1960s... and What a wonderful story of black love. This movie is centered around the emotions and decisions that exist between a man and a woman in loving another each other. Racism and black struggle was not present AT ALL in this film. We, the audience, were allowed to relax, watch love grow and simply enjoy.
My girl Makayla from HTGAWM is co-starring! Tessa is awesome, as usual. Nnamdi is wonderful!
I gave 4 stars because there are a few plot holes.
But if you want a good romantic story... this is it.

Ron VincentReviewed in the United States on December 28, 2020
5.0 out of 5 stars
Beautiful Story Beautifully Told.
Verified purchase
What a great movie!
Sylvie’s Love hits all the right notes as a period love story that bridges the 50’s, 60’s, and 70’s. You care about Robert and Sylvie from the first frame to the last.
The acting is fresh and convincing.
Beautiful story.
105 people found this helpful

joel wingReviewed in the United States on December 28, 2020
4.0 out of 5 stars
A story about the struggle to find happiness
Verified purchase
Sylvie’s Love seems like it will be a straight romance between Tessa Thompson as Sylvie and Nnamidi Asomugha as Robert but it proves to be much more. At first it seems like they are a match made in heaven with Sylvie working at her dad’s music shop in 1950s-60s New York City and Robert being a sax player who gets a job at the store just to talk to her. The twist is that the movie turns out to be about the costs of love. Both make all kinds of sacrifices and many of those get in the way of the two being together.

Thompson and Asomugha definitely have a chemistry about them. The movie exploits that with several memorable scenes. For instance, Robert invites Sylvie to come see him play and afterward he asks for a kiss. When Sylvie says yes he literally jumps up the stairs to her. There’s another one of them dancing in the middle of a street.

The fact that it’s not a straight love story and the two struggle is also a welcome surprise. You have to have some ups and downs to keep the plot interesting.
C
89 people found this helpful

Tina G.Reviewed in the United States on December 28, 2020
5.0 out of 5 stars
Love, music, and life...4 ½ stars
Verified purchase
At first I had mixed feelings on Sylvie’s Love- I love the cast and music, but the beginning was so slow I ended up turning it off and returning to it a couple hours later. Glad I continued on as it turned out to be a great story. Recommend if you’re looking for a light, feel good period drama with a happy ending. 4 ½ stars.

The brief version (detailed version below): In the 1950/60s, Sylvie is finding herself and desires to work in television. She meets and falls in love with Robert, a musician who works at her father’s record store. The story unfolds as she navigates through life (job, family, love, etc). It’s a tale of love, heartache, love of music, doing things for one another thinking it’s for the best when it’s really not, finding where you fit in the world, empowerment, not listening to what others tell you to be or do because that’s the norm, friendship, family, loss, and more that I’m not doubt forgetting to mention. The cast is outstanding.

“Life is too short doing things you don’t absolutely love.”
“I’m tired of trying to be someone I’m not.”
“Do you remember that thing you told me about wanting me to be happy? Even if it meant you couldn’t be a part of my life? Well, what if I can’t be happy unless you’re part of it?”

Detailed review below, may contain some spoilers
*******************
**************
******
***
*
The movie starts out in New York City 1962 with Sylvie (Thompson) waiting outside a concert hall and encounters Robert Halloway (Asomugha), a previous love. Time then rolls back to five years prior when they first met at her father’s record store. They get to know each other and fall in love despite her being engaged to another man by the name of Lacy. Robert is a talented saxophonist in the Dickie Brewster Quartet. The band gets an offer in Paris, Robert asks Sylvie to go with, but she declines. She is pregnant with his child, but doesn’t tell him (she believes he is the next John Coltrane and doesn’t want to force him to choose). Time skips to 1962 where Sylvia gets a job as a TV producer’s assistant, is married to Lacy, and has a daughter. The film then catches up to the opening scene of her and Robert outside the concert hall. They end up attending the performance together and rekindle their love for one night. Her father passes away but beforehand, he tells Robert he has a child. Sylvie makes the decision to separate from her husband and after this, Robert and her rekindle their love again. Wanting to provide for his family, Robert reaches out to those who offered him deals before and he is informed Jazz is dead. An old friend says he can get him a job with Motown in Detroit, so he travels there only to learn it was all guff. He returns to Sylvie and tells her he has to go to Detroit alone and he’s not a family man. She later learns the truth, realizes they are meant to be with each other and travels to him where they reconnect. As credits role, we see them together as a family doing various things and him playing her father’s saxophone on a TV show she is producing.

FrankReviewed in the United States on December 28, 2020
5.0 out of 5 stars
GREAT MOVIE!!!
Verified purchase
The story line was great! The actors were wonderful.
55 people found this helpful

Alexia & HelenaReviewed in the United States on December 28, 2020
5.0 out of 5 stars
Classic Jazz, Heart break, Real life relationship movie It's got everything.
Verified purchase
Love the music. Like the emotional real life scenes. No fairy tales but drams do com true. Dreams are earned and sacrifices have to be made to find happiness. But it is worth it in the end. Hope and reality. I love it. Jazz is a bonus. Makes me feel ten years younger.
49 people found this helpful

A. MpunguReviewed in the United States on December 28, 2020
5.0 out of 5 stars
Perfect Holiday movie.
Verified purchase
Liked the storyline. Set in 60s and 70s just like Uncle Frank. Found this relatable and loved how the 'Do unto others' rule was central in plot but in a very emotionally rich way. Will be watching again over holiday season.
52 people found this helpful
See all reviews
Back to top
Get to Know Us
Make Money with Us
Amazon Payment Products
Let Us Help You
EnglishChoose a language for shopping. United StatesChoose a country/region for shopping.
© 1996-2021, Amazon.com, Inc. or its affiliates