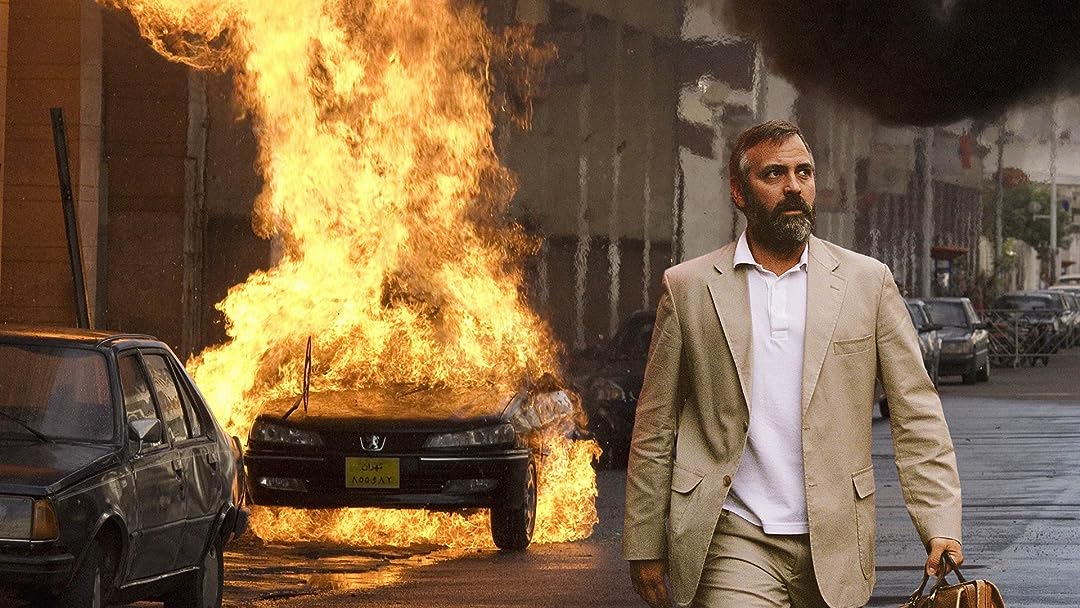 (2,498)
6.92 h 7 min2005X-RayR
Big oil means big money. And that fact unleashes corruption that stretches from Houston to Washington to the Mideast.

D. KempReviewed in the United States on July 21, 2016
3.0 out of 5 stars
Not for the faint of heart
Verified purchase
Roger Ebert says:

"The movie begins with one of the Gulf states signing a deal to supply its oil to China. This comes as a strategic defeat for Connex, a Texas-based oil company. At the same time, an obscure oil company named Killen signs a deal to drill for oil in Kazakhstan. Connex announces a merger with Killen, to get its hands on the oil, but the merger inspires a Justice Department investigation, and -- Let's stop right there. The movie's plot is so complex we're not really supposed to follow it, we're supposed to be surrounded by it. Since none of the characters understand the whole picture, why should we?"

I should have read a few reviews before watching. Sitting down for a mindlessly entertaining action thriller and winding up in a murky, cerebral geopolitical work of art is disorienting. This film demands that the viewer pay attention, but even then, the four interwoven but separate storylines never resolve into a unified whole. I feel that I have seen something important, and once my head stops spinning I'll watch it again to try and figure out what.

Joyce.SReviewed in the United States on June 21, 2016
5.0 out of 5 stars
everything else is pretty much straightforward
Verified purchase
I would say this plot offers up more suspense and intriguing details than any Tom Clancy movie I've ever seen. It wasn't until about an hour into the story that things finally started to make sense. But, from that point on, I was hanging onto every word and piecing together every detail.

The trick to understanding this movie before it's over is to remember the names. Once you get to the point when you know who's who, everything else unfolds from there.

So, what's going on?

Matt Damon is a financial advisor to Prince Nassir. Prince Nassir's family just approved a deal for the chinese to come in and set up shop as oil drillers, as the chinese offered the highest bid.

However, the US wants to cut the chinese out of the picture so that the newly merged connex and the smaller oil company can do their thing in place of the chinese.

That's when the CIA have George Clooney arrange for Prince Nassir to be assassinated. However, you know that doesn't work out. You might recall the torture scene. After Clooney narrowly escapes certain death, the torturer threatens to reveal the CIA's assassination attempt to the media.

Next we see Clooney threatening the old man in the cafe. A trusted former co-worker had informed Clooney that the old man is setting him up to be the fall guy for any negative backlash resulting from the exposure of the failed assassination attempt.

Once Clooney is able to get his passports back, he attempts to intercept Prince Nassir on the desert freeway and warn him of the danger to his life. In the freeway scene, Nassir has re-established relations with the Chinese; and with the help of 9 out of 11 of the country's generals, he is attempting to de-throne his conniving, ambitious younger brother.

So, everything else is pretty much straightforward.

Maadi MikeReviewed in the United States on July 22, 2016
5.0 out of 5 stars
Syriana - A film of life and modern times in the Middle East
Verified purchase
Having lived in the Middle East for a number of years, this film always brings me back to what life was like for me when I lived there. Although a thriller, with a story line that of course is thrilling, the depiction of what could mirror real life in the Middle East is an interesting parallel thought provoking essay in itself. I enjoy this move and view it often. I have recommended it to others. There are scenes that are disturbing but could represent a reality that we in the West can hardly understand but is a reality for the people who live, work and love there every day of their lives. I truly like and enjoy this move time and time again and highly recommend it.
12 people found this helpful

Chad MReviewed in the United States on September 15, 2021
5.0 out of 5 stars
Award-winning espionage movie and one of the best in recent decades
Verified purchase
The world of espionage has many connections with international corporations. Money buys power and power can disrupt or topple governments. Oil wealth was a major source of power that, in this movie, is resurgent. The George Clooney character works for the CIA and goes to Lebanon and Syria at great risk to himself and his team. There is a contrast between the ruthlessness of the oil-backed militants and operatives and the professional approach used by the CIA. This movie, like all good espionage movies, has surprises and features that are never entirely explained. On the topic of oil wealth, books by Richard A. Clarke and Robert Baer provide the big picture of what may be going on in the oil exporting nations.

David ThompsonReviewed in the United States on June 19, 2016
5.0 out of 5 stars
this is by far the best of the lot
Verified purchase
Of all the Hollywood movies about the quagmire in the Middle East, this nation's dependency on Middle Eastern oil and the machinations-both on Wall Street and in Washington-that occur to assure an uninterrupted flow of oil from there, this is by far the best of the lot. It shows with a quick but empathetic eye what the impoverished young men and boys from Pakistan and the like endure in their attempts to eke out a living as virtual slaves to the emirates and their companies, and the ultimate collapse of the social values that occurs when those men and boys become religious converts and fanatics. This movie was made because it had George Clooney and Matt Damon in it and therefore their support. For the uninitiated, this film shown how seemingly everything in all of the countries in the Middle East is interconnected, and how one seemingly insignificant event sends out ripples to the farthest reaches of politics and economics, both there and here in the US. Some may be critical of this film for it's lack of depth, but I believe is casts a light on the spider webs in the sociopolitical and economic theaters of the world, and to have gone into more detail would have resulted in a 4 hour movie, something which is not going to be economically viable.
7 people found this helpful

PJ and PaulReviewed in the United States on October 7, 2021
5.0 out of 5 stars
Good, Interesting, Exciting Film, but a bit Challenging to Follow.
Verified purchase
The film is great. And George Clooney is great in it.

The film demonstrates that the best proof of understanding what interacting counties and governments operate, means you must "follow the money."

And it is a definite study of how the rich and powerful use the weak by using the ideals and desires of the weak to draw them in and use them.

The sounds involved are done so well, you can feel them.

Amazing!
One person found this helpful

Student for LifeReviewed in the United States on June 3, 2021
3.0 out of 5 stars
Ok movie to watch while no Football is on TV.
Verified purchase
This is a financial and political thriller regarding oil in the Middle East and the powers that control it. Several stories run parallel in the movie, converging in an unexpected end. Syriana was shot in 200 locations in five continents, with large parts shot in the Middle East, Washington, D.C., and Africa. The cast is formed of well-known names, such as George Clooney, Matt Damon, Jeffrey Wright, Chris Cooper, William Hurt, Tim Blake Nelson, Amanda Peet, Christopher Plummer, Alexander Siddig, and Mazhar Munir. Clooney's performance was critically acclaimed, earning him an Academy Award and a Golden Globe Award, as well as British Academy Film Award, Critics' Choice Movie Award, and Screen Actors Guild Award nominations.

Shauna RussReviewed in the United States on August 21, 2020
1.0 out of 5 stars
I can't rate a video that won't play!
Verified purchase
I've cleaned the DVD, I've cleaned my player, but this is the only video that won't play. It won't even show the contents on the disc from the File Explorer. I'd like a replacement that actually works - any chance of that? Then I'll be able to rate and review the actual movie that I'd really like to see.

I really don't like to give a rating of one on this title. As I explained, I can't rate what I can't see. The one star rating is for the seller, at this time. Let's see if they can fix this!
See all reviews
Back to top
Get to Know Us
Make Money with Us
Amazon Payment Products
Let Us Help You
EnglishChoose a language for shopping. United StatesChoose a country/region for shopping.
© 1996-2021, Amazon.com, Inc. or its affiliates